Every once and a while you stumble upon an unknown flick where, after you've watched it, you can only say, "What the fuck?" Even rarer, you stumble upon something that not only gets you to say "What the fuck?" but also seriously wonder, "Why the fuck is this movie unknown?" Freaked is one of those rare movies. It is, hands down, prime cult-film material — and funny as hell on top of that. How can a movie this good be so fucking unknown? Well, if you go online and do a little research, some assumptions are easy to draw: a vanity production of the extreme, it not only failed to click with its supposed post-pubescent stoner audience when first released, but the studio powers-that-be simply didn't know what the fuck to do with a movie they didn't know why the fuck they let get made in the first place. 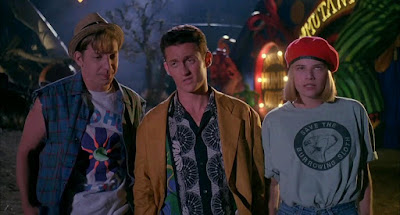 That no one could figure out the "why" behind Freaked back then is due primarily to both the short memory of the industry and the penchant to run and take cover when a decision goes wrong, for the "why the fuck" they greenlit the movie is easy enough to ascertain. Simply, long ago but not too long before this movie, two guys starred in Bill & Ted's Excellent Adventure (1989 / trailer) and, two years later, returned for a sequel named Bill & Ted's Bogus Journey (1991 / trailer). The films made a lot of money, and the studio probably hadn't yet realized that it was the more 16 Magazine-friendly of the two — i.e., Keanu Reeves — who had a future, so when the less 16 Magazine-friendly of the two — i.e., Alex Winter — came up with this project, which pretty much looked like it was in the same vein as the earlier two movies, they dished out an 11-million-dollar budget to Winter and his two fellow cohorts from MTV's Idiot Box (1990-91 / trailer) sketch comedy series, Tom Stern and Tim Burns. Only to then get a movie that they didn't know what to do with or how to market, which bombed at the pre-screenings, and then went on to earn less than $7,000 on its opening weekend and topped out at under $30,000. 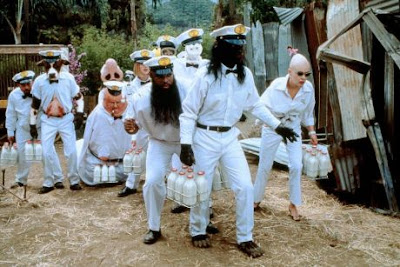 In all truth, in our book any movie that blows an alleged one-million dollars for an un-credited appearance of Keanu Reeves (or any name actor) in a role that almost any half-way professional actor probably could've excelled at — Ortiz the Dog Boy — sort of deserves to flop. (Why use a name actor if you aren't going to use the name?) That said, even movies like that deserve eventual reappraisal or rediscovery if and when they are as surreally creative and off the wall and fun and simply out there in deep space like this one. Freaked is an unknown absurdist classic, and one even with still-pertinent social commentary. The only problem is that, as is the case when something is "unknown", no one seems to know it's out there. Yet. 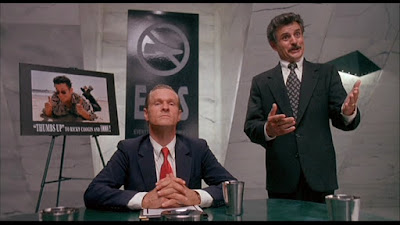 The scattershot approach of Freaked is already to be discerned in its opening credit sequence, which looks a bit like something a computer-whiz and tasteless Ray Harryhausen might have done had he dropped acid or wanted to ruin his career. (The homage is obviously intentional, as the head of the Cyclops from The 7th Voyage of Sinbad [1958 / trailer], among other pop-culture references, makes a cameo in a later transformation sequence.) Stealing all the un-filmed funny sequences from movies like Freaks (1932 / trailer) or Freakmaker (1974) or Island of Lost Souls (1932), Freaked tosses them in with everything and the kitchen sink, as well as a seemingly game casting (Mr T as the Bearded Lady? Genius!), into a blender. The result is, unbelievably enough, a socially critical movie that takes the piss out of everything, even its own criticism. Not everything hits the mark (there's an adolescent gay stereotype joke, for example, that is less funny than predictable and was already dated when the flick was released), but the sheer barrage of visual and verbal ridiculousness of the disordered insanity should keep most connoisseurs of filmic madness happy. 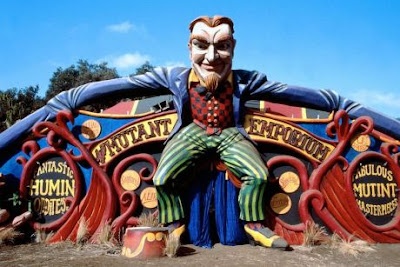 The plot is a variant of taking the wrong turn-off trope more common to horror movies like Tourist Trap (1979), Wes Craven's  The Hills Have Eyes (1977 / trailer), and some thousand other films, but told mostly in flashback to the vapid TV hostess Skye Daley (Brooke Shields, of Alice Sweet Alice [1976 / trailer]). Brainless Hollywood celebrity Ricky Coogin (Winter), hired by the unscrupulous conglomerate E.E.S. ("Everything Except Shoes") as spokesman for their highly-toxic Zygrot-24 fertilizer, travels down to the small South American country of Santa Flan with his yes-man buddy Ernie (Michael Stoyanov). They are joined by the pretty activist Julie (Megan Ward of Wes Craven's Don't Look Down [1998], Albert Pyun's Arcade [1993 / trailer], and more), and make the fatal mistake of stopping off at a roadside attraction, Freek Land, run by the decidedly mad Elijah C. Skuggs (real-life whackhead Randy Quaid of Parents [1989 / trailer], Hard Rain [1998], Bug Buster [1998] and way more). Too late, they find out that he not only displays his "human oddities", he makes them.... 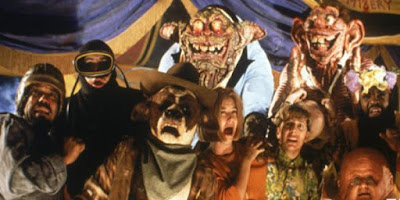 At a tight 80-minute running time — the studio supposedly cut about 11 minutes — Freaked goes fast and furious with the comic jabs, absurdist humor, tasteless jokes, simple weirdness, and total idiocy. If the concept of Mr T the Bearded Lady seems too mainstream for you, how about two Rastafarian eyeballs as compound guards? Or an absolutely gross-looking and drooling & puss-shooting Ricky Coogin becoming a freak-show hit by performing Shakespeare's Richard III? Or, among the transformed freaks, a hammer that used to be a wrench? Special mention should perhaps be given to Randy Quaid, who for a change manages to play demented (and dim) without killing the movie — but then, everything is so demented in Freaked that his character simply fits in perfectly. 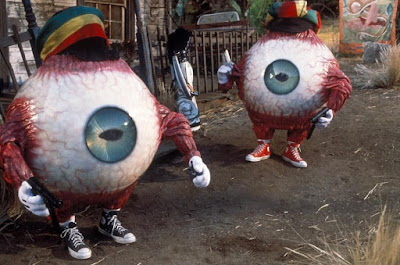 Freaked — help make it the cult film it deserves to be: watch it now with some friends and spread the word that there is one wacked-out, fun movie out there. 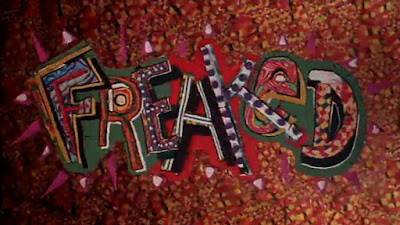