The Curse of Frankenstein (Great Britain, 1957) 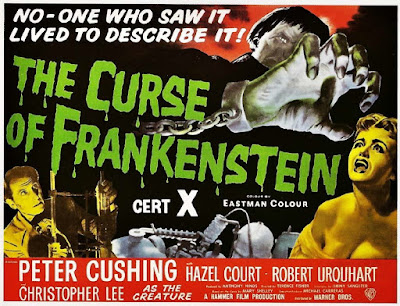 (Spoilers!) The film that made Hammer… and both Peter Cushing and Christopher Lee's careers, though in the case of the latter, he really didn't gain all that much international attention until the following year in Hammer's Horror of Dracula (1958 / trailer). 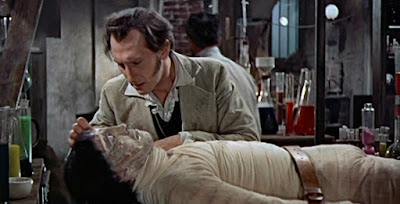 Directed by Terrence Fisher, written by Jimmy Sangster, this version of Mary Shelley's classic shocker is a far cry from James Whale's classic black and white version, but the 1957 film is only all the better for it. Threatened with legal action by Universal Studios should the film be too similar to their version, not only was the original monster's iconic look given a wide berth, but scriptwriter Jimmy Sangster returned to and updated the original source (even as he kept the novel's time period), dumping all the poetry of Whale's 1931 version and doubling the blood, sex, and cynicism. Like the novel upon which it is based, The Curse of Frankenstein is very much about the good doctor himself, the monster making his appearance relatively late in the movie and, in general, remaining very much a secondary figure.

Featuring excellent production values, top-notch acting, and more blood and carnality than the public of the time was used to seeing in their horror films, the movie was met by scathing critiques but nonetheless quickly became the most profitable film made by an English studio, a position it held for many years. (It also jump-started the mania for Gothic horror films that Hammer was to excel in.) The movie's present position as a horror classic has come to it like flavor does to vintage wine, slowly and only over the passage of time. The first Frankenstein film to be made in color, it was Hammer's first color production as well, which very much indicates that despite all the admonishments to the contrary, both the film company and director Fisher were out to create something extraordinary from the very beginning. (Likewise, unlike with any of their earlier productions, Hammer cut a deal with Warner's for the U.S. distribution of the movie in advance of the actual filming.) 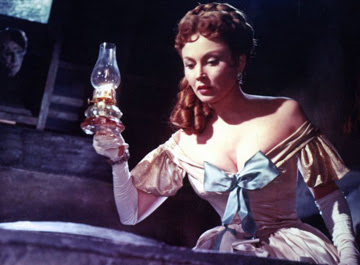 Not that all those involved necessarily believed the film would amount to much. An oft-told tale about The Curse of Frankenstein that might or might not be true involves an exchange between Cushing and Lee when the actual filming began: When Lee complained that his character had no lines, Cushing supposedly retorted, "You are lucky — I've read the script." Whatever his feelings may have originally been about the project, Cushing nevertheless supplied one of the best acting jobs of his long and illustrious career, presenting a truly definitive version of the doctor as a cold-hearted, dedicated egoist, ruthlessly driven by a desire to master science, forever blind to anything minutely resembling morals or guilt. Charming he may be, but behind that mask of English refinement hides an arrogant, psychotic soul. 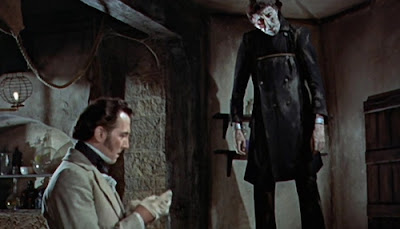 If Cushing's acting turn is top notch, that of the other stars of the film is variable. As Paul Krempe, Frankenstein's tutor and later assistant, Robert Urquhart makes no special impression other than that he is obviously younger than the adult Frankenstein despite supposedly being many years older. The film's mouthpiece of morals, he tends to annoy and seems highly ineffectual all the way up until the final scene in which he seals the doctor's doom by denying that the creature ever existed, an act which actually is contrary to the moralistic stance of his character up to that point, for it can be seen as nothing less than an act of simple deviousness: by insuring Frankenstein's execution, he finally gets the girl. The girl in this case is Elizabeth, played by Hazel Court, one of the most beautiful scream queens of the time. A capable actress, she does much with what is little less than a peripheral, token role, making a much more indelible appearance than Urquhart, despite his meatier part. (Her eventual retirement from horror movies after her marriage to US television director Don Taylor came much too early, depriving the genre of one of the best scream queens after Barbara Steele.) 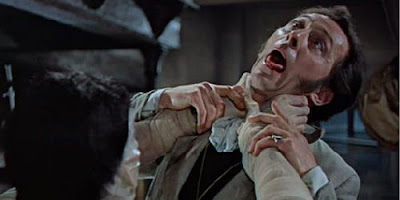 As for Lee, despite having almost less screen time than Court, he makes an excellent impression as the monster, presenting him as an uncoordinated killing machine, a creature alien to both its stitched-together shell and the world around it. That he kills has nothing to do with him being "evil", but rather to the fact that he doesn't seem to know that he can do anything else. As for the other tertiary characters, only the maid Justine (Valerie Gaunt) makes any true impression, due as much to her campy accent and her position as the creature's only female victim (in her nightgown, no less) as to the fact that she manages to exude enough earthy sexuality to make it easy to believe that Frankenstein would be more than willing to bonk her. (Oddly enough, her career seemingly never went any further than this film and a brief appearance as one of the Count's vampire consorts in Horror of Dracula.) 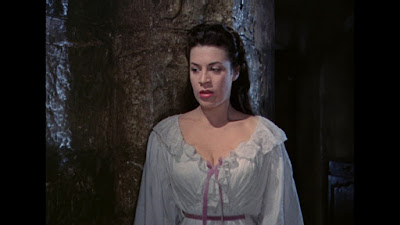 The Curse of Frankenstein opens with the young, orphaned Baron (Melvyn Hayes) primly dong his prescribed duties in regard to the burial of his deceased mother. That out of the way, he promptly hires Paul Krempe (Urquhart) as his tutor. Jump start ahead, the Baron is not only (as mentioned before) an adult suddenly much older than his tutor, but he is the owner of a full-blown mad-scientists lab in which he and his tutor-turned-assistant carry out all sorts of experiments in the name of science. Starting with the revival of a dead dog, they quickly move on to stitching together a humanoid creature from body parts collected and stolen (some, like the hands, under the most questionable of circumstances). Elizabeth (Court) shows up to take her promised matrimonial place at the side of the Baron just around the time when the moralistic Krempe opts out of further assisting the Baron to instead hang around making declarations of future doom. The Baron kills for a brain which in turn Krempe damages, but there is no stopping the driven, ruthless mad scientist. The Creature (Lee) is a pathetic mess, an out-of-whack piece of reanimated body parts that does little more than kill and destroy; despite its obvious faults, the Baron revives it a second time after its initial death. Finally, after it is destroyed in that handy vat of acid every turn of the century scientist seems to have had in his lab, the Baron is held responsible for the creature's murders and must face the hangman alone, deserted by both Krempe and Elizabeth… Of course, as everyone knows who has seen the less-visceral and almost as equally entertaining sequel, the Baron does not lose his head as planned. 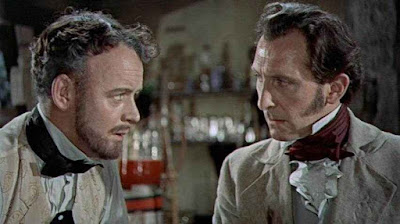 It must be added that the film's greatness lies more in the whole of the parts than in the direction itself. Despite his lasting fame and the respected reputation, Terence Fisher was somewhat staid when it came to using the camera. His compositions are definitely balanced, but his direction tends towards immobility. Fisher's true talent seems to have been to get the best out of the people he worked with, be it the actors or the set designer, and that is what makes the movie here. Indeed, in The Curse of Frankenstein, his camera work is so static that when he finally uses his famous speeded-up zoom to the freshly revealed face of the monster, the trick is so obvious that it almost fails: one is less shocked by the monster's ravaged appearance than by the sudden, unexpected movement of the camera. Luckily, however, all the other ingredients of the movie mix so well that the finale result remains an undisputed, if minutely flawed, masterpiece of horror. 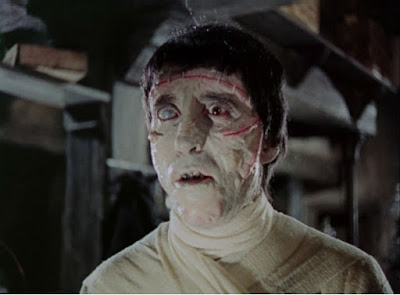