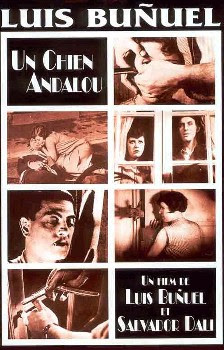 We are continually surprised at how many people have not yet seen this film. Sure, everyone who's ever gone to art school or studied filmmaking has seen it, but if you get down to it, that's a smaller group than you might imagine. Indeed, recently we were at a table of film fanatics, and we proved to be the only one who had ever seen this early masterpiece of Surreal cinema co-written by Salvador Domingo Felipe Jacinto Dalí i Domènech, Marqués de Dalí de Pubol (11 May 1904 — 23 Jan 1989) and directed and co-written by Luis Buñuel Portolés (22 Feb 1900 — 29 July 1983). (But then, we did go to art school in another life.) Though "the most famous short film ever made" (according to Roger Ebert [18 June 1942 — 4 April 2013]), it would seem that while masses of people out there may have heard of it, masses have also yet to see it. We would like to do our bit at correcting this hole in the education of the general film fan.
We won't talk too much about what the film is about, for despite all the possible interpretations, Freudian and otherwise, we have always tended to believe Buñuel's insistence that there is no meaning to be found in the string of scenes collected from his and Dali's dreams and imagination. As Buñuel once explained, "Our only rule [when writing the script] was very simple: no idea or image that might lend itself to a rational explanation of any kind would be accepted. We had to open all doors to the irrational and keep only those images that surprised us, without trying to explain why."
Assuming this is true and not a later reimagining of intention — similar, for example, to scriptwriter Joe Eszterhas's later ascertain that he meant Paul Verhoeven's Showgirls (1995 / trailer) to be as funny as it is — then at best the movie is an example of how anything can be interpreted and given meaning should one choose to. Above all, what the young Surrealists were doing back in 1929 was simply trying to aggressively attack the common form and structure of film. They did a good job, as you can well imagine that that which still shocks (in parts) today, was a full slap in the face in 1929. 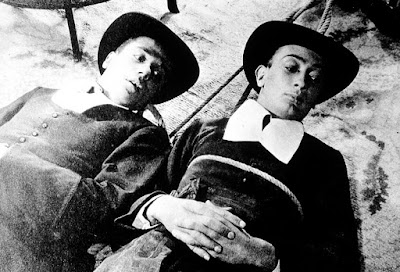 Un Chien Andalou / An Andalusian Dog was the directorial debut of Luis Buñuel, whose other known previous screen credits are that of assistant director on Jean Epstein's screen adaptation of Mauprat (1926 / full movie, French subtitles) and Mario Nalpas & Henri Étiévant's Papitou / Siren of the Tropics (1927 / Joséphine Baker dancing), a co-scriptwriting credit on Epstein's later horror film, The Fall of the House of Usher (1928 / full movie, French subtitles), and a small acting part in Jacques Feyder's Carmen (1926 / from the soundtrack). Buñuel, who went on to be rather famous as a filmmaker, appears in the opening scene of this film as the macho smoker who slits the eye. The young Dali is also seen briefly in the film, as one of the two priests being dragged behind the two grand pianos laden with dead donkeys (he's at your right above). 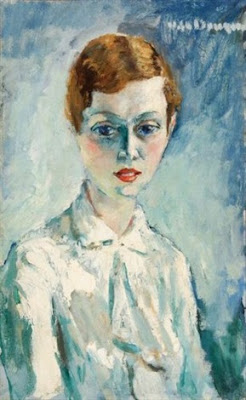 Of the others who appear in the film: the actress playing the woman whose eye is slit, Simone Mareuil, killed herself at the age of 55 by self-immolation on a public square on 24 October 1954, while Pierre Batcheff (born 23 June 1907), the man dressed as a nun, supposedly died of an overdose of veronal on 12 April 1932. The other most notable face of the movie, the attractively androgynous woman on the street, is played by Fano Messan (1902-1998), a mostly forgotten woman sculptor who, like Marlene, liked to wear men's clothing; active in the Parisian cultural scene of late 20s, among other artists she posed for is one of our favorites, Kees van Dongen (26 January 1877 – 28 May 1968). That's his painting of her above.
In any event, enjoy this month's short film: An Andalusian Dog.