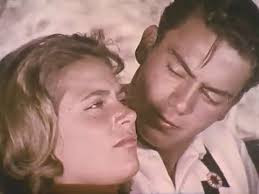 "This is America in the second-half of the twentieth century and Jeanette is a slave. Not a slave by circumstance of birth or force, but by choice. A choice she made herself not so very long ago, a choice that at the time probably seemed no bigger than, 'Should I belong or shouldn't I?' The pace of modern teenage society is often fast. The beat is sometimes frantic. Cultures and backgrounds have been mixed. The need to belong is ever present."

The quote beneath the screenshot above is from the opening speech to this bat-shit "educational" anti-drug film, a speech which, when read, leaves us wondering what the fact that "cultures and backgrounds have been mixed" has to do with drugs — especially when the swimming pool crowd shown is a lily-white. One can only assume he meant economic classes have been mixed, though none at the pool party look as if they were not of the same financial background, as "people of color" — as one is [was?] wont to say — are generally seldom part of Davis's world. In any event, the quote is but an excerpt of the oft-questionable verbal bombast that the film delivers nonstop for its entire running time.
Seduction of the Innocent is indeed "another Sid Davis (1 April 1916 – 16 Oct 2006) classic about a [white] teen-age boy and girl, who through a need to belong and to go along with the group, start first with barbiturates and end up as heroin addicts."

One thing is sure about Sid "San Jac" Davis's shorts: if you start watching them, you can easily get addicted. We started today with The Dangerous Stranger (1949 / full damaged film), and one short promptly led to the next, and the next, and the next, with each one getting better and better — or worse and worse, depending on how you look at it. Hours later, we've decided this one here is a hoot worth sharing.
Sid Davis, you might remember, was a former film double for John Wayne who, thanks to Wayne's initial financial support, built an "educational" scare-film emporium on cheap, poorly made and by now (usually) extremely campy "horror" films narrating the terrible things that will happen to you should you, well, ever do anything but go to school and to church, get a job, get married, make babies, be a Republican. In Davis's films, where you end up — married, dead, or as a drug addict — is due alone to you and your wrong moral choice: there is no forgiveness, there is no way back, there is no second chance. To use the punch line of a many a joke: "You gonna die!" (Much like Davis died due to his cigarette addiction — lung cancer killed him — if only a lot earlier than his 90 years.)
We already took a look at his amazing anti-homosexual hate short, Boy's Beware (1961), way back in 2013, but today we want to introduce you to his equally outrageous, but far more campy, if oddly well made, anti-drug horror short, Seduction of the Innocent (USA, 1961). Wow. What a movie.
And, we must add, not really true. Despite our active youthful past, one which involved everything from alcohol to speed to marijuana to mushrooms to acid to St. Bartholomew's trumpet (yech!) to downers to X to accidentally smoking heroin (it wasn't fun) and probably other stuff tried once but since forgotten, we've managed to pay/work our way our entire life long and now, the desire to experiment long gone, are even eyeing eventual retirement in a house of our own. Some people are prone to addiction, others not, and as they say in German, "Two beers are also a breakfast."
Why the German saying? So as to construct a sloppy link to what The New York Times long-ago wrote in the obituary of Sid Davis: "The movies are squarely in the tradition of cautionary literature for children, whose best-known example is probably Struwwelpeter, the German tale of the dreadful fate of a dreadful child, which has been traumatizing young miscreants since the mid-19th-century. Mr. Davis's films, most live-action, some animated, are 16-millimeter equivalents. […] The Sid Davis universe is fraught with peril. Every transgression — a swig from a bottle, a drag on a cigarette — leads to swift and certain doom, usually in under a half-hour. Among the series of unfortunate events to which Mr. Davis's young protagonists fall victim are these: abduction, murder, rape, stabbing, robbery at gunpoint, falling off a cliff, suffocating in an abandoned refrigerator, being burned to a crisp, being stuffed into the trunk of a car, being run over, pregnancy, venereal disease, unemployment, time in pool halls, time in prison, myriad auto accidents, heroin addiction (a direct result of smoking marijuana), prostitution (ditto) and bad hair (ditto)."
A downfall well exemplified in
October's Short Film of the Month,
Seduction of the Innocent:
None of the "actors" involved seem to have ever done anything else — but then again, for years we failed to recognize Jim Kelly as the star of that other great but not very campy anti-drug short, A Day in the Death of Donny B.(1969), so perhaps we also simply don't recognize "Jeanette" and her fellow lost souls. Do you?
Posted by Abraham at 7:59:00 AM