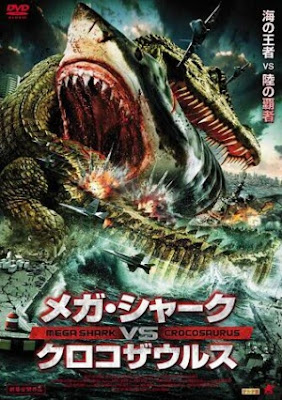 The little tyke wearing the rubber suit in Fred Olen Ray's less than spectacular Biohazard (1985 / fan trailer),  Christopher Olen Ray, has grown up to follow his father's footsteps and now makes movies which, going by this Hershey-turkey produced by the lowest denominator of all contemporary low budget movie production firms, The Asylum, are even worse than anything his daddy ever vomitized. 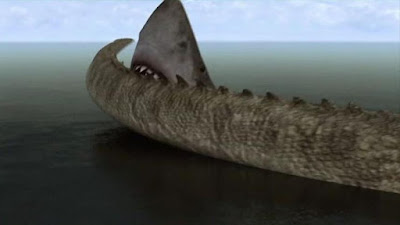 Unbelievably enough, this piece of direct-to-DVD buttmud is not only a sequel to 2009's Mega Shark vs. Giant Octopus (trailer), but seems to have been successful enough to warrant two already released further diarrheal infusions, Mega Shark vs. Mechatronic Shark (2014 / trailer) and Mega Shark vs. Kolossus (2015 / trailer), as well as an announced TV movie that probably doesn't feature Shane Diesel but does have Hermann Melville (1 Aug 1819 — 28 Sept 1891) doing summersaults in his grave, Mega Shark vs. Moby Dick. (Why flog a dead horse when you have mega shark?) 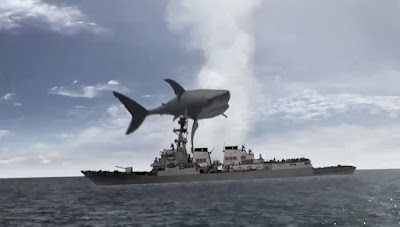 As is the case of most low budget filmic tax deductions and/or direct-to-DVD poopsicles like this, Mega Shark Vs Crocosaurus also has its requisite has-been and C-celebrities swallowing their thespian pride so as to pay the rent. Here, the faces that strike the "Don't-I-Know-That-Face" chord are first and foremost Jaleel White, known to everyone as the highwaters-wearing bespectacled nerd from Family Matters (1989-97 / "trailer"), and Robert Picardo, famous as The Doctor from Star Trek: Voyager (1995-2001 / trailer). Less familiar but known-to-some faces include the former boxer and male model Gary Stretch, and the actor Dylan Vox who, despite his oddly doughy face and un-toned body, also has had success in gay porn as "Brad Benton". (He's not our type, that's for sure: his thickness is in all the wrong places.) 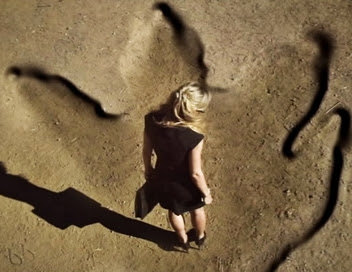 One's first reaction when viewing a celluloid butt nugget of this caliber is to feel sorry for people like White and Picardo who, for whatever reason, have been reduced to turd burgers like this one. But truth be told, one should better feel regret for oneself: the has-beens at least earned money to waste their time on the poop project, whereas the given viewer has no real excuse for wasting their time on a DVD dingleberry that stinks as much as this one. 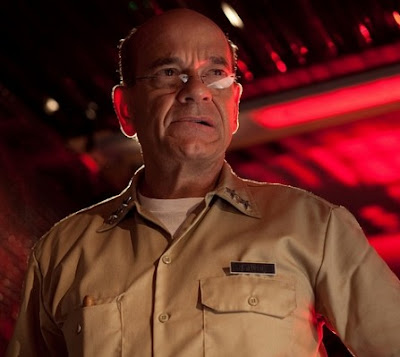 Two names are given as the guilty parties behind the non-plot and non-story, namely Naomi L. Selfman and Micho Rutare, and it would seem that it was two non-talents too many, as the episodic and dull narrative is neither in any way entertaining nor very funny. Most laughs are the result of pure desperation of the part of the viewer: a film this bad must be laughed at, or? Maybe when the bad movie is fun — see Dinocroc vs. Supergator (2010 / trailer) for a recent minor but enjoyable super-monster example — but not when it's a sewer missile like this one. Hard to believe that co-scripter Micho Rutare went on to work on one of The Asylum's most entertaining projects, their fun zombie series, Z-Nation (2014-201? / trailer), because he obviously brought nothing creative to this Hershey squirt. 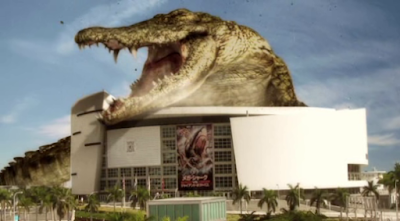 Initially, one might think that Mega Shark Vs Crocosaurus at least has the commendable aspect of not just being another flick featuring nothing but white folks, but after the mega shark sinks the USS Gibson (an obvious nod to Debbie Gibson, the feature has-been of Mega Shark Versus Giant Octopus), Jaleel White's Dr. Terry McCormick, despite his position as Hero #2, quickly becomes the token semi-hysterical Afro American in the sea of white faces populating this anus cake entitled Mega Shark Vs Crocosaurus. 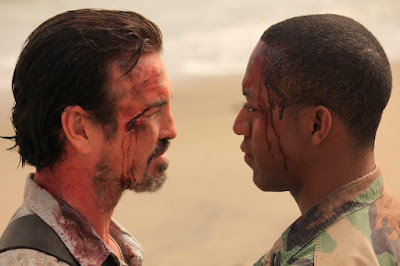 Christopher Olen Ray should perhaps emulate the work of his father in one way other than just producing poop pizza. If nothing else, his dad usually at least flashed some boob in his low budget butt cookies — often the only true saving grace and respite of his lowly projects. Ray, Jr., however, leaves the two admittedly highly attractive women of his dookie pie fully clothed. (One might argue that there is no logical reason for the women in this piece of buttwood to flash skin, but one need only to see such grindhouse non-classics as Firecracker / Naked Fist [1981 / trailer] to realize that true masterfeces don't require logic to get their babes to get naked.) 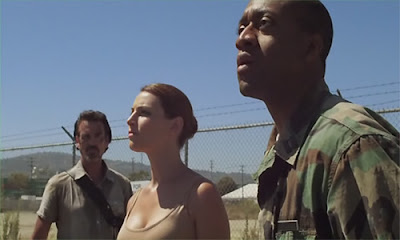 True, Ray Jr does at least find a few seconds to allow babeliscious Sarah Lieving (as Agent Hutchinson), who has yet to a nude scene in any of her movies, to take off her jacket so that she can run around much of this celluloid ass-cake in a skin-tight top. (Why the bra, dude? Or do such decisions not fall under the power of the director?) But there is really no reason why the expendable character played by intriguingly attractive Hannah Cowley, who has gotten naked in a movie before (The Haunting of the Innocent [2014 / trailer]), didn't lose her digs before becoming crocosaurus fodder. 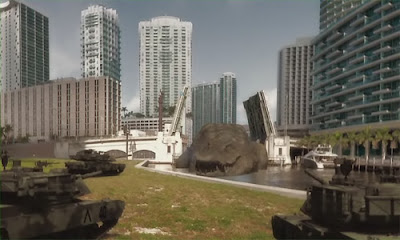 Whatever. Even with nudity, Mega Shark Vs Crocosaurus would've still been what it is: a ridiculous, incompetently made and unfunny piece of shite, with way too much Z-rate CGI, telling the tale of mega shark fighting the egg-laying crocosaurus, who's all pissed 'cause mega shark is eating her eggs, before both creatures finally die in the end… until the sequel, at least.
Mega Shark Vs Crocosaurus: a definite not-see. 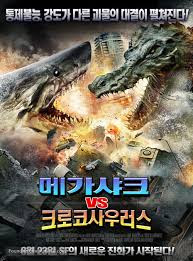