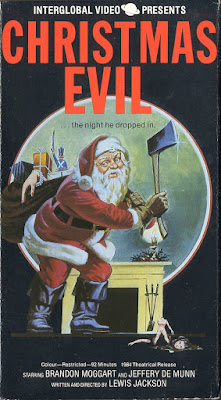 Christmas is already a little while back, but then we never do put our reviews online in a timely manner. The original title of this odd little film was You Better Watch Out, which is perhaps the more appropriate moniker for though the Santa-dressed nutcase does do "evil" in that he kills a few assholes, he is less innately evil than he is a poor nebbish who's gone off the deep end.

Christmas Evil is far from the earliest modern horror feature film to use the Christmas season as its setting and theme — that honor arguably goes Silent Night Bloody Night (1972 / trailer) — but with its rebranding as "Christmas Evil" the movie became one in a long series of name-day horror flicks spanning from Halloween (1978 / trailer & 2007 / trailer) to Friday the 13th (1980 / trailer & 2009 / trailer), My Bloody Valentine (1981 / trailer & 2016 / trailer) to Graduation Day (1981 / trailer) to Prom Night (1980 / trailer & 2008 / trailer) and so many more. (If, in the meantime, it hasn't yet joined most of the previously named slashers on the list of mostly unneeded remakes, it has, since its debut, been joined by an unending plethora of Christmas-themed horror movies of all sub-genres.) Of all the films just named, Christmas Evil is perhaps the most quirky, and the one that fits least to the expectations and genre traditions of a typical slasher or body-count film. Hell's Bells, it can't even be called a "dead teenager flick" 'cause not single teen appears in the movie, much less dies. 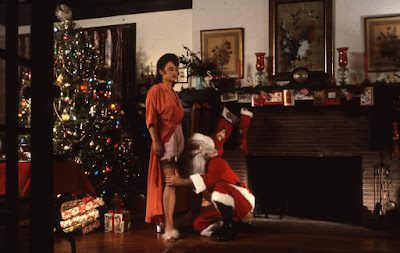 Nevertheless, or perhaps therefore, Christmas Evil is an oddly popular and generally well-regarded movie, one famously enough championed by no one less than the cult icon John Waters, who once claimed it to be "the greatest Christmas movie ever made". And although Waters' recommendations can generally be trusted — Lesbian Nuns is as good of a read as he said it was — we would tend to say that he was indeed being a bit hyperbolic in his praise of Christmas Evil, which, on the whole, is indeed mildly interesting and extremely idiosyncratic, but is never scary or horrific, is seldom bloody, and, worst of all, extremely slow. 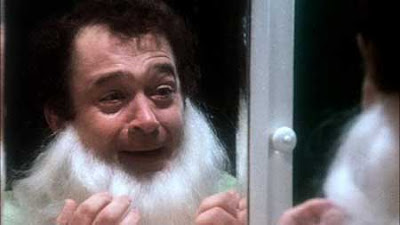 Like most horror films, Christmas Evil opens with the mandatory prelude setting up a thin motivation to the events to occur years later: here, little Harry Stadling (Gus Salud) doesn't just catch Mommy (Ellen McElduff) kissing Santa Clause (Brian Hartigan), he catches Santa Claus licking Mommy in a place most adults find fun to lick — which causes him to grow up to be an unmarried, Christmas-obsessed loser (Brandon Maggart) working as an ineffectual manager at cheap-toy factory.*
* Sixteen years later, catching mommy having Yuletide sex was also used as the cause for sending the killer off the deep end in John Russo's indefinitely far more sleazy and bloody and breast-heavy and inept slasher Santa Claws (1996 / trailer). 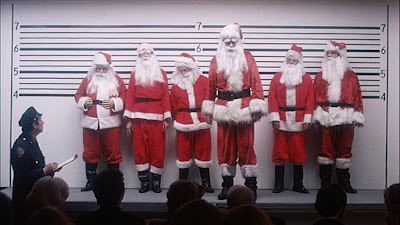 And how Christmas-obsessed? Well, his walls have more Christmas paraphernalia than those of college boys (used to) have Playboy centerfolds. Worse, he also has extremely and perversely creepy voyeuristic tendencies: he spends his free time spying on kids to find out who's naughty or nice, diligently recording everything in notebooks. (Although his voyeuristic tendencies are clearly non-sexual in nature, they are nevertheless oddly uncomfortable to witness — luckily the scene in which he sees one kid reading Penthouse is not taken to its possible extremes.) 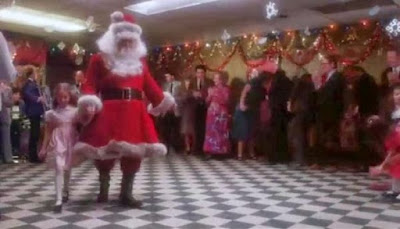 It takes well over 50 minutes before Christmas Evil embraces the violence and bloody that is expected of a movie marketed as it was, but even then the deaths are intermittent and rare. More than anything else, the mostly melancholic movie concentrates on the unraveling character of its lead loser and the world he inhabits, a world populated by hypocrisy, greed, and a lack of goodness. (An early version of Trump's world, so to speak, but on a smaller level.) The expected horror or trashiness is underwhelming, lost amidst scenes that veer from character development to whimsical to arty before almost being redeemed by a WTF ending which allegedly alienated audiences at the time of the movie's original ending. The oddly ineffectual and dislikable characterization of the second most important male of the movie, Harry's adult brother Philip Stadling — who is played as an aggressive choleric in an inexplicably one-dimensional manner by the soon-to-become great character actor Jeffrey DeMunn (also found in The Hitcher [1986], The Blob [1988], Turbulence [1997] and much more) — doesn't help things much, either. 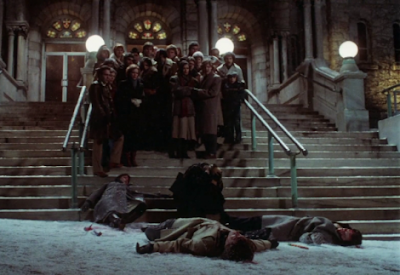 For all its arguable failings, the biggest flaw of Christmas Evil is nevertheless not its failure as a horror movie, a failure that only arises if one goes into the movie actually expecting a horror flick: to put it simply, though the movie has "horrific" elements, it is not a horror movie. Thus, if viewers instead await an eccentric and drily black comedy with occasional flashes of artiness (e.g., the snow-covered street of Christmas lights) and inexplicableness (e.g., the Frankenstein [1937 / trailer] homage), they will in all likelihood find the movie entertaining in its own right, particularly if the print viewed is a newer, more pristine one and not one of the many no-budget and mutilated DVD versions found at dollar stores across the US. 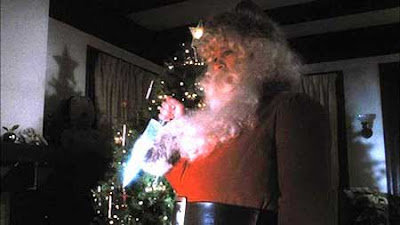 Still, while Christmas Evil does function as the black comedy it was obviously intended to be, the humor is mostly intermittent, mostly wry or dry, and usually only mildly funny. Were it not for the gloriously WTF final scene, which totally redeemed the movie for us — a filmmaker really has to have balls to have an ending like that — we would have probably labeled Christmas Evil a loser. Instead, it gets a half-hearted recommendation as a movie that tries to be different and, in that sense, succeeds. 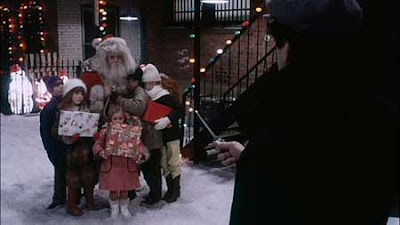 Addendum of irrelevant facts pertaining to and not to the movie:
One of the producers of the Christmas Evil, "the mod Los Angeles stockbroker and Pop-art collector" Burt Kleiner, who also briefly appears in the movie playing Sol Wiseman, was one of the original backers the L.A. Weekly. 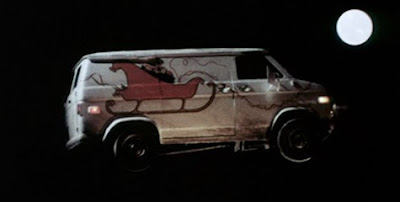 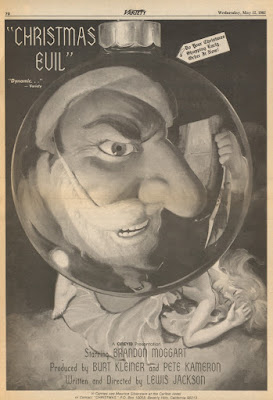 The lost movie Jackson calls The Deviators is actually, according to the movie's producer Barry Kerr over at the Rialto Report (whence the image above comes), the now lost movie The Deviates. Kerr's memory differs from Jackson's: "[Jackson and I] both wanted to make a movie. He had more experience than me, so we agreed he would write and direct the film and I would produce it. We put a little ad in the New York Times, and these two elderly guys in suits and ties with slight eastern European accents answered it. I don't remember their names but they wanted to make a movie. Not just any movie either; they wanted to make a porno movie. [...] So they gave us around $5,000 and Lewis wrote The Deviates. It was a hardcore film but it had a plot too. It wasn't wall-to-wall sex. I don't remember who was in it. [...] We made the film, we handed it over to the two old guys, we got paid — and that's the last I heard of it." 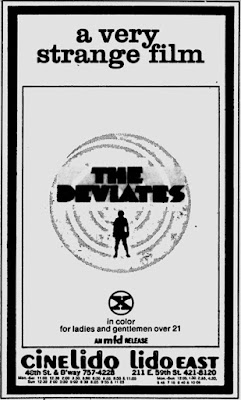 Nevertheless, in the 12 Aug 1972 issue of Billboard, on page 66, in a small blurb about Kerr's involvement with the soundtrack to his only know directorial project, Forbidden Under the Censorship of the Law aka The Flasher (1972), it is written that "Kerr's previous film, The Deviates, grossed  $300,000." (For the full story behind The Flasher, and Kerr, check out the previously mentioned Rialto Report entry.) 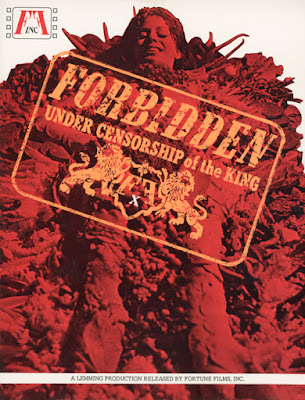 Jackson's other project with producer Krasnow at the time was as writer and director of the now lost movie The Transformation (The Sandwich of Nightmares), the plot of which was based on a story he read in an issue of the underground comic Insect Fear. According to Jackson (again in Brian Albright's book), "The movie itself is quite mediocre because I couldn't get decent actors. I had written a lot of dialogue, and the actors were just bad." 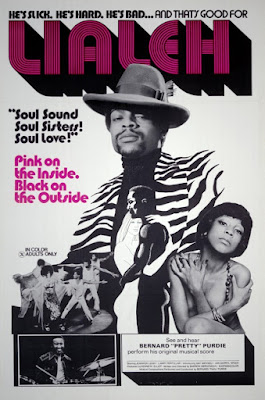 One of the "untalented" actors of Lewis Jackson's lost The Transformation (The Sandwich of Nightmares), Les Crook, who plays Renfield in the flick, has since rechristened himself as "Les Visible" and, going by stuff found on one of his many blogs, has found a god of some sort, thinks Israel was behind 9-11, and the Holocaust never happened. He also discovered The Lost Plays by William Shakespeare. In regard to The Transformation (The Sandwich of Nightmares), a lost film that he is obviously incapable of discovering, in his mail to Temple of Schlock Les "Visible" Crook says, "That was a strange production." (Strange is a matter of opinion, one might say.) 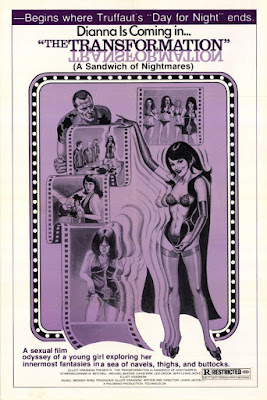 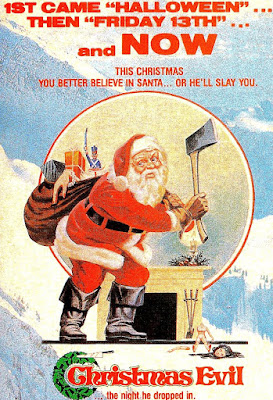