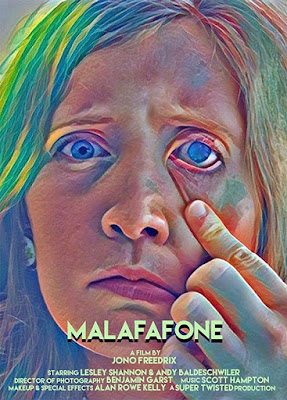 Way back in 2016, when we presented Fist of Jesus (2012) the Short Film of the Month for April of that year, we mentioned how "when bored, we are likely to search the web using unlikely word combinations such as 'Jesus with a boner' or 'Zombie Mohammed' (or the inverse) just to see what we discover." A penchant that we are sure is shared by many.
While the question of what "unlikely word combinations" are is naturally open to discussion, some combinations have proven, to date, as continually unsuccessful. "Zombie Mohammed", for example, has long been a nada, but for the ancient (2012) case of some guy who dressed up as one for Halloween and got attacked by a pious believer of Islam. ("Jesus with a boner", on the other lubricated hand, can bring hours of Internet distraction.) 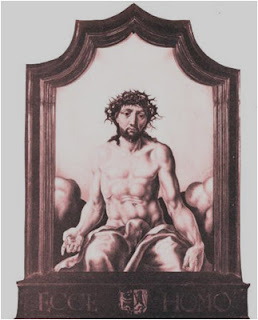 When searching for new (as in: "unknown to us") blogs, the phrases "lesbian horror blog" or "lesbian move blog" have never taken us to where we wanted — as in: a [preferably horror or cult] movie blog from a lesbian perspective — especially since we tend to find probably-man-made lesbian porn a bit terra nullius. (Aside from the fact that porn without a male appendage leaves us with an inability to identify, who wants to be the third wheel?)
"Gay horror blog", however, once proved a bit more successful, as it led us to Big Gay Horror Fan, a fun little blog to which we often return. Broader in scope* and more playful than A Wasted Life, it is also pithy where we're verbose, so it's always good for a quickie, like the bushes in a certain section of Berlin's Tiergarten. And it is there (at the blog, not Tiergarten) that we found this month's Short Film of the Month.
Malafafone is very short and oddly funny in a surreally tragic way. To simply rearrange and steal what Big Gay Horror Fan says about the flick: "[The] pre-date beauty regimen of the heroine (Lesley Shannon) of writer-director Jono Freedrix's bright yet powerful horror comedy short Malafafone soon takes a turn for the excessive. Of course, while this is presented in fun, Freedrix also makes a powerful point here about society's rigorous beauty standards and their effects on the people, mainly women of all backgrounds and types, who have no hope of truly being able to prescribe to them." (He says more, actually — check out the blogsite to see what.)
By the way: "Malafafone" is Hebrew for cucumber, a vegetable with multiple possible usages…
Malafafone from Jono Freedrix on Vimeo.
Posted by Abraham at 12:34:00 PM