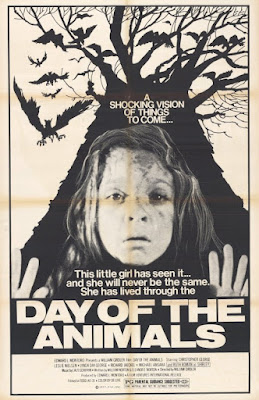 Aka Something Is Out There. You know you're talking double-cheese when you're talking William Girdler (22 Oct 1947 – 21 Jan 1978), and double-cheese this film is. That man, going by his films that we've seen, seems to only ever have made cheese — but good, fun cheese. What fan of trash cinema finds no joy in savoring such movies as his hilariously wonderful Blaxploitation disasterpiece Abby (1974 / trailer), his sporadically entertaining and amazing Gein-inspired Three on a Meathook (1972 / trailer), his fun if weak Pam Grier vehicle Sheba, Baby (1975 / trailer), his classic Jaws (1975 / trailer) rip-off Grizzly (1976 / trailer), and… Hell, all of Girdler's films are fun, if you get down to it. That man simply had the magic touch.
And Day of the Animals is no exception: it's 100% prime cheese galore, only with the added attraction of an "all-star" cast to leave many B-movie fans drooling, most notably Christopher George (25 Feb 1931 – 28 Nov 1983) and his wife Lynda Louise Day George, the great character actor Richard Hanley Jaeckel (10 Oct 1926 – 14 June 1997), a young Andrew Stevens (The Terror Within II [1991]), Barbara Eden's ex-husband Michael George Ansara (15 April 1922 – 31 July 2013), and Leslie Nielsen (11 Feb 1926 – 28 Nov 2010) playing a total asshole who loses it. And lest we forget: the movie was produced by the infamous Edward L. Montoro,* a former producer of prime trash if there ever was one!

* Montero is a legend, like DB Cooper. Montero founded Film Ventures International and a few years later had his first success in films by writing, directing and producing the Uschi Digard vehicle Getting into Heaven (1970 / trailer), after which he moved into production and distribution, foisting an endless stream of fun trash into the grindhouses and drive-ins if the USo'A, including Italo-trash like Beyond the Door (1974 / trailer), the incoherent The Visitor (1979 / trailer) and Antropophagus (1980 / trailer, diverse Girder films, the "documentary" The Force Beyond (1977 / trailer), the damaged-Vietnam vet film Search and Destroy (1979 / trailer), John 'Bud' Cardos' The Dark (1979, see R.I.P. Tobe Hooper, Part I) and Mutant (1984 / trailer), Don't Go in the House (1979 / trailer), William Lustig's Vigilante (1982 / trailer), the boob-heavy Splitz (1982 / trailer), Juan Piquer Simón's Pieces (1982 / trailer) and Pod People (1983 / full movie), Mortuary (1983 / trailer), the ridiculously fun Kill or Be Killed (1976 / trailer) and Kill and Kill Again (1981 / trailer), Hundra (1983 / trailer) and so much more. In the mid-1980s, beset by a series of flops, legal battles with Universal Films, a nasty divorce and bad health, Montero cleaned out over one million from the accounts of Film Ventures International and literally, completely, disappeared. To this day, no one knows where he went or whether he is even still alive (he would be around 90 if he were).

But back to this movie, Day of the Animals, a cheapo nature-gone-wild flick with lots of great nature photography and attacking animals and a mildly high bodycount (if little actual blood) that flies by like an eagle, quickly and easily. Few if any of the attacks are convincing, and like so many bodycount films — a genre to which this film does, basically, belong — the often laughable plot development works towards separating the big main group into smaller groups, but all the flaws found in this movie somehow only serve to make it more fun, more enjoyable.

Unexpectedly enough, considering how old this flick is, the hole in the ozone layer is the catalyst of the plot: instead of causing global warming or even simple skin cancer, it turns animals into psychopathic, aggressive killers. But not indiscriminate killers: no, they want to kill people. And amidst a California mountainside of countless four-legged and two-winged killers — which often work in unison — a group of unsuspecting city folk is hiking down the mountain from the helicopter drop-off point for a weekend of nature. A creepy scene in which the group suddenly notices nature has gone silent is the first true sign that something isn't right, but soon the animal attacks increase, the social cohesion of the humans begins to fall apart, and the number of dead hikers grows. And finally, at least in the case of the asshole alpha-man adverting agent Paul Jenson (Leslie Nielsen), it begins to drive select people mad as well.

Day of the Animals is one of those movies where it is fun to guess who's first and who's next, but while it is often easy to do so, there are a few surprises along the way. Indeed, one true surprise comes simply when a character (Jon Cedar [22 Jan 1931 – 14 April 2011], of Foxy Brown [1974 / trailer]), having made it back to town with a "shell-shocked" child he's found along his way, opens the door to a truck and a specific dead, non-hiker's body falls out.

That said, most of the animal attacks are pretty unconvincing (the cougars never use claws, the wolf and dogs never use their teeth to truly rip), and it is funny that though some of the men have knives they never once use them to defend themselves — not even when they're doing hand-to-hand combat with a pack of "killer", tail-wagging Rin Tin Tins. But all the attacks, even when they fail with a capital "F", are fun to watch in that giggle-inducing way we so enjoy.

Personally, our favorite scenes are the rat attack and the bear wrestling one: both are true highpoints of this enjoyable slice of drive-in trash, if amazingly bloodless and, in the case of the bear attack, realistically too quickly over. 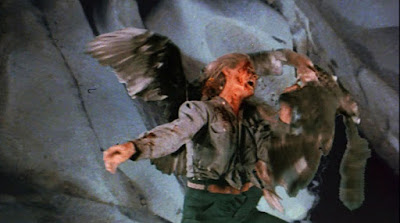 Really, though: if you were the local law and you just got woken up by a midnight phone call from your local deputy saying that the National Guard was there to evacuate the town, would your first reaction be to take the leftover chicken out of the fridge for a midnight snack? Of course it would, which is why you, just like old man Ranger Tucker (Walter Barnes [26 Jan 1918 – 6 Jan 1998], of Pigs [1973 / full movie] and High Plains Drifter [1973 / trailer]), would be confronted by rats flying through the air and attacking you. We snicker every time we remember that scene, much like we do when we think of a fully flipped-out and shirtless Jenson (Neilson) deciding to prove his alpha position to a huge bear. (Guess who wins.)

Age has been kind to the movie, assisting in making its numerous obvious flaws part of the fun instead of a detraction. And the most obvious original plus points of the production are as effective now as when the movie was made. The cast, as mentioned, is great; likewise, the cinematography, at least outside, is excellent, as is the music by the old master Lalo Schifrin. And in all truth, for all its cheesiness, Day of the Animal does succeed at establishing an ever-increasing tension (admittedly punctuated by unintended interludes of humor) and, as mentioned, occasionally even delivers a decent shock. 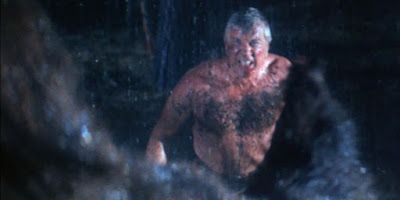 We here at A Wasted Life definitely Day of the Animal two skeletal thumbs up. 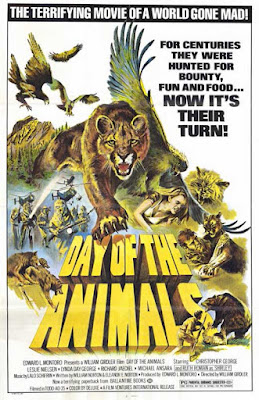