A relatively low-budget remake of a really low-budget classic that obviously had enough of a budget to be able to hire some good special effects people.
The first question that comes to mind is “Why remake The Blob?” But, hey: Why not? While the filmmakers don’t really add anything new to the story—other than a few small details about the Blob’s origin and a lot more blood, goo and half-digested bodies—they do manage to do a decent job in making a watchable film that, if lacking the charm of the original, does keep the viewer entertained by the slime.
Like the original Blob, the action here takes place in small-town USA, complete with football jocks, cheer leaders, sheriff, local diner with a waitress with a heart of gold and canalization big enough for Los Angeles. Actually, it’s the over-exaggerated presentation of this small town idyll that brings the most humor to the film, as the stereotypes are so extreme that they can do or say nothing without it seeming like an ironic joke. (One hopes that it was done so on purpose.) 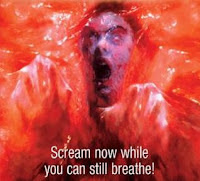 Matt Dillon’s younger, uglier and much less talented brother, Kevin Dillon, takes over the old Steve McQueen roll, and does badly at it. As Brian, a motorcycle-riding town bad boy and the eventual hero, he is not only completely dislikable, but isn’t even believable. In truth, though, aside from the guy who plays the sheriff, no one in this film can really be said to be acting anyway. Even Candy Clark, as the waitress with the heart of gold, has trouble delivering her lines with any conviction, up until she gets to scream her head off and be digested. But then, in these types of films, acting is never really that important. What is important are the special effects, and in that, The Blob, for the most part, does some top notch stuff.
The story ain’t much: the Blob crashes and begins to eat/digest, and whenever it slurps someone up, it gets bigger. Via air shafts and the sewer it slides about, eating everyone in its path. The government, in the form of a bunch of gun-toting dudes in anti-virus suits, eventually shows up and quarantines the town. They end up being more interested in killing Brian than in saving the town after he finds out that the Blob is actually a crash-landed governmental germ warfare experiment gone out of control. But, The Blob being a highly moralistic film, the Bad Guys eventually all get slimed and the leather-jacketed loser and the lead set o’ knockers save the day.
One of the best scenes is that of the digesting of a sleazy jock about to date rape his (he believes) passed out big-breasted cheerleader date; when he reaches for those soft, rounded love pillows, he gets more than the expected handful, as her face so nicely puckers into itself and the tits virtually attack him. Likewise, when Candy Clark bites the dust in a telephone booth while trying to call the sheriff for help, it is a bit of an unexpected shock to see the lawman’s half-digested face slide by as the Blob slowly slimes its way down the glass booth. The movie theater scene is also a big improvement from the original film from 1958, in which the supposedly terrorized film patrons can be seen laughing their heads off as they run. All in all, the best thing about this version of The Blob is that it is an unapologetic special effects blood and guts extravaganza which delivers some true gross outs, complete with an almost surprise ending. True, the big show down doesn’t completely cut the mustard, but there are some creative deaths along the way, and the film does keep one laughing. And the ending actually leaves a believably ironic opening for a sequel, though one has yet to come.
About the only really unexpected twist to this version of The Blob is the way the director Chuck Russell, who also cowrote the new version, constantly changes the audiences focus on any one character as the film’s male hero. While Shawnee Smith, who plays a babe with balls, is always without a doubt the lead jiggler, before Russell finally and regrettably focuses on Kevin Dillon’s Brian as the town’s co-savior, the viewer is led to believe that the lead pair of testis is actually to be a "likable" jock who eventually gets completely oozed at the hospital (again while calling the sheriff). Next, the sheriff himself is Mr. Sympatico, only to slime out of the scene soon thereafter. (Ah, if only the same could have happened to Kevin Dillon.....)
All in all, a true Saturday-night-light-the-joint-and-pass-the-beer video for the guys, guaranteed not to please the set of knockers you have at home.
Posted by Abraham at 2:50:00 PM