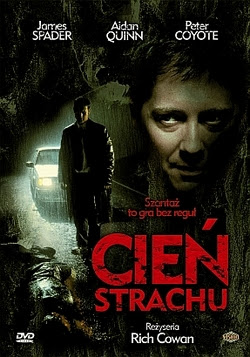 (Sorta spoilers – but who cares?) We wasted our time so you don't have to. Shadow of Fear is one of those kind of movies that we're happy get made because they help underused and underappreciated or going-downhill actors pay the rent, buy new cars, or get that Brazilian. That said, if you're looking for a good thriller, this overly complicated and far-fetched (not to mention in parts badly acted and poorly shot) flick is not what you want. You might stay awake to catch everything that transpires in the hope that it all makes sense in the end, but staying awake will be a battle from the start. Shadow of Fear, for all its delusions of being a real movie (if only D2V and/or D2DVD), is TV-movie caliber in all respects – though the average TV movie usually has better cinematography, and probably more action.
Trailer to
Shadow of Fear:
The narrative takes place amidst a well-to-do McMansion-dwelling social sphere that makes many of the figures difficult to connect to or sympathize with, including the movie's rather bland young upwardly-mobile professional "hero", Harrison French (Matthew Davis of Below [2002], BloodRayne [2005 / trailer] and Wasting Away [2007 / trailer]). Having failed at a big (and needed) sale, he drives home on a rainy Spokane night and because he's a typical dick who can't keep his eyes on the road he ends up hitting and killing some dude standing in the middle of the deserted road. 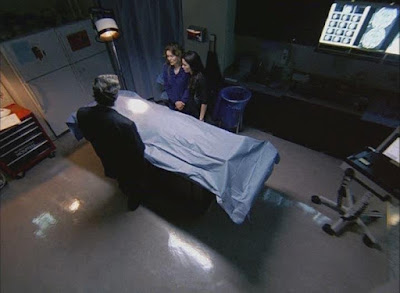 Like any good contemporary person, McMansion-dwelling or not, Harrison hits and runs, but not before dragging the body into the woods and covering it with branches and leaves. Oh, wait! Could it be that he killed Chris (Andrew Harris), the junkie brother of his loving wife Wynn (the always intriguingly attractive Robin Tunney of The Craft [1996 / trailer], End of Days [1999 / trailer], Looking Glass [2018 / trailer], and Monster Party [2018 / trailer]), whom everyone assumes just robbed the local bank? (The bro, that is, not the wifey.) 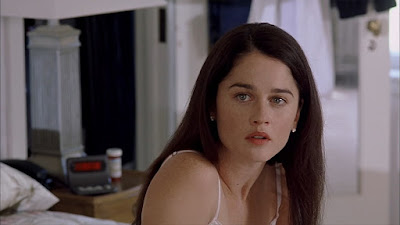 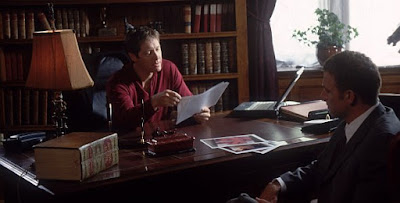 Shadow of Fear is more slow-going than it is confusing, but even if everything sort of ties into an implausible knot at the end, the narrative thread has major holes in it. Unluckily, the lead also doesn't have enough charisma for one to ever be able to root for him, while the bad-guy lawyer, as played by James Spader, is less threatening or scary (accepting when he walks onto the lawn and talks with the wifey Wynn) than he is a man angry for having major hemorrhoids. The big showdown also overlooks one major thing: all the photos that are in the lawyer's car would see our hero not pass go, and go directly to jail, instead of buying himself a cane and taking up (?!?) the lawyer's odd penchant for collecting men-with-secrets. 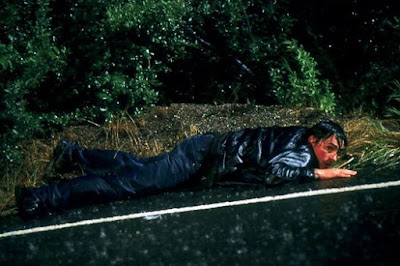 Again, films like Shadow of Fear are needed and appreciated for giving our favorite B-stars their needed rent money, but we really can't help but wonder how a movie can take a character actress of the caliber of Alice "Borg Queen" Krige (of Gretel & Hansel [2020 / trailer], Silent Hill [2006 / trailer], Stay Alive [2006 / trailer], Solomom Kane [2009 / trailer], Sleepwalkers [1992], Lonely Hearts [2006] and Habitat [1997 / trailer]) and basically do nothing with her. Sure, she seldom has big parts nowadays, but she's a great actor and is convincing as always in the few mini-scenes she shows up in — but she must have 3-4 minutes screen time at most, and that's bunk. Much like the film. 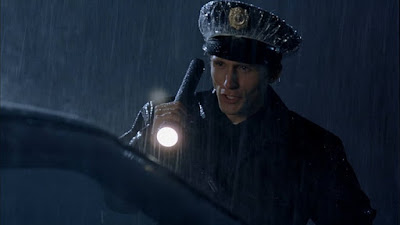 Can't say I've heard of this one! But there are enough famous or at least semi-famous actors here to make me want to check it out. My wife and I were discussing Robin Tunney about a month ago, actually - not that we could think of her name without Wikipedia's help. We were watching "Encino Man" and I was pretty sure she was the girl with the bald head in "Empire Records." Which turned out to be true, although neither of us could think of anything she'd been in since then!

Not sure it's really worth checking out... famous faces aside, it just isn't that good. And Tunney has rather thankless role as a loyal wife, though she is at least not just a trophy wife.