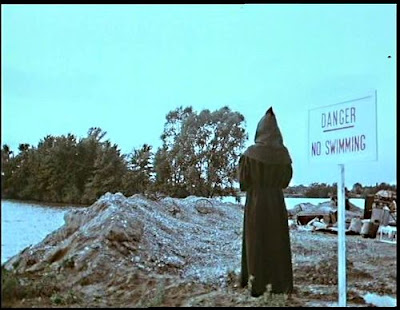 A.k.a. Lonely Water. This two-minute chiller is actually public information cum safety warning broadcast on TV in Great Britain. (PIF in British English, PSA in American English.) "It was commissioned by the government's Central Office of Information (COI) in response to an increase in child drowning accidents: written and produced by the COI official Christine Harmon and directed by Jeff Grant, who blogged about his experience. [The Guardian]"
Lonely Waters "played on British television throughout the 1970s and terrified an entire generation of kids who not only steered clear of 'lonely water' but also stopped swimming. Some probably stopped bathing. [Coming Soon]"
Within the 90 seconds of this masterful short, astute viewers can find reverberations of films ranging from  The Seventh Seal (1958 / trailer) to Don't Look Now (1973 / trailer). The wonderfully chilling voiceover is supplied by everyone's cult fav, the great Donald Pleasance (5 Oct 1919 – 2 Feb 1995) of way too many films to bother mentioning any. His final line — "I'll be back... back...back..." went on to become a lasting, instantly recognizably saying amongst British kids long before Arnie made "I'll be back" internationally popular with The Terminator (1984 / trailer).
Interesting tidbit: amongst the kiddies of the short is the Afro-Brit Terence Anthony "Terry" Sue-Patt (19 September 1964 – circa May 2015); he's got a rather entertaining look on his face during the first accident. He went on to enjoy some success and renown on British TV. Nevertheless, it has been suggested by news sources that "whilst his body was found on May 22, 2015, it is possible that he had been dead for nearly a month before discovery".
And how long do you think it'll take till your body is found? Fellow Brit Joyce Carol Vincent [15 Oct 1965 – 21 Dec 2003] puts him to shame, though: it is estimated she lay dead in her flat for two, possibly three, years before discovery. See the docudrama Dreams of Life [2011 / trailer]. 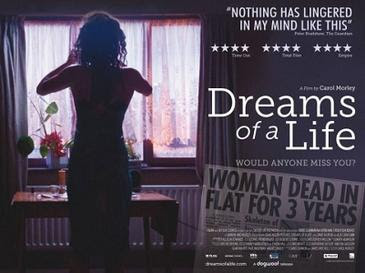