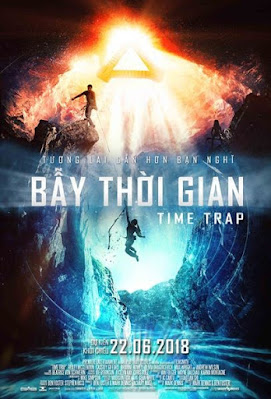 It is perhaps close to impossible to make a movie set in a cave featuring a group of non-adults that doesn't end up having, at least for a few seconds here and there, an almost Goonies (1985 / trailer)-like feel. And so it is with Time Trap, if only for a second or two now and then, an independent sci-fi movie that should appeal to younger folks looking for something that doesn't scream "kiddy film" (most of the kids are post-pubescent) but also doesn't fixate on adult themes or aspects that might turn the narrative too far in an unpleasantly serious direction. Luckily, however, as adolescently safe as Time Trap is, it never becomes as annoying as the puzzlingly-labeled "classic" of the last century — which isn't to say, however, that the movie overcomes all its flaws well enough to truly be recommendable, or that it truly offers a satisfying resolution.
Trailer to
Time Trap:

For the first ten minutes or so of Time Trap, the focus of the narrative indicates to be on an archaeologist named Hopper (stud-muffin Andrew Wilson, the forgotten and better-looking brother of the more-famous Luke Wilson and Owen Wilson) and his dog, who are out searching for some hippies that went lost some decades earlier. 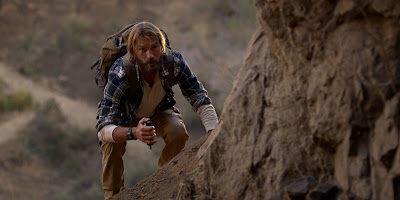 Wait! They aren't just any hippies: they're his parents and younger sister, who disappeared when he was a wee lad. He finds their van, and a cowboy seemingly frozen in position inside a cave, and before you can say "Let's go spelunking," he goes and does just that — followed a few days later, after no one hears from him again, by his faithful students Taylor (Reiley McClendon of The Mine  [2012 / trailer]) and Jackie (Brianne Howey of Viral [2016 / trailer]), inexplicably augmented by the ragtag trio of Cara (Cassidy Gifford of The Gallows [2015 / trailer] and Ten: Murder Isalnd [2017 / trailer]), her younger sis Veeves (Olivia Draguicevich), and an annoying pubescent chub named Furby (Max Wright). Of course they lie to their parents about where they are off to, and in no time flat do the stupidest thing in the world: rappel down deep into the cave they think Hopper entered. And thus the adventure starts... 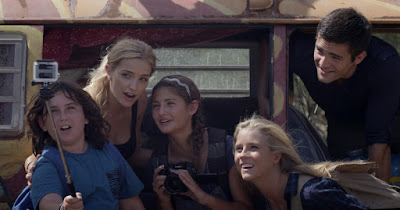 Okay, now the big spoiler: the interior of the cave system is a time trap, a nether-region that exists outside of the time continuum of the rest of the earth, populated by Neanderthals and Conquistadors and cowboys and the whole Hopper family and more (basically: anyone who ever entered the cave), where a mere moment is the equivalent of years outside — a fact that the spelunking quartet needs more than an hour to figure out. In other words: everything they ever knew above on the surface of Earth (parents, friends, hometown and country) is long dead, buried, turned to dust, evolved into almost a new life form. 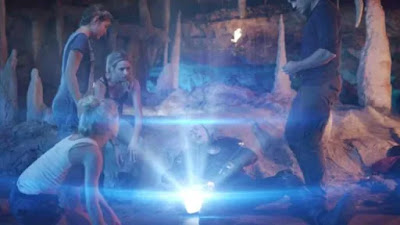 A rather shattering concept, if you think about it, that gets brushed aside with one teary hug between Cara and Veeves and, in the final scene, glossed over even more with a few choice lines of laughable dialogue, including "Well, it's not quite home, but at least were all together" and "A lot's changed, but... we're kind of a big deal around here." (Dunno if most people would be as unaffected as the kids in this film by the concepts of never seeing anyone they knew ever again and spending the rest of their lives amidst a future form of humanity that neither looks nor speaks like they do and, if a reference made earlier in the film is true, breathes a different atmosphere than they — and that in all likelihood sees them as an earlier and inferior step in the human evolution. Human zoo time.)

Okay, don't think and the film is enjoyable enough for what it is. Time Trap is much more a young-adult-cum-kiddy sci-fi adventure flick than it is a serious movie, science fiction or otherwise. As such, it is also a surprisingly well-shot and good-looking for a low budget, independent feature, and is far from boring. The narrative also follows a certain logic that (assuming you can even accept the concept of a "time trap" on Earth and in a Texan cave instead of in Ted Cruz's brain) verges on believable for a while, although, in all honesty, the quickness with which the kids are willing to rappel down into the cave (the first four and, later, Furby alone) makes them all viable candidates for the Darwin Awards. The special effects are in general pretty good, tension is there on occasion, and a few people even die — at least for a time.

But the film also reveals an inability on the part of the filmmakers to follow their concept to the logical and tragic outcome that the plot actually demands. Instead, as might be expected of a kiddy flick, they wimp out and offer a flawed deus ex machine that doesn't hold any water. The sudden appearance of the save-the-day futuristic technology of what can only be called "magic wires", for example, renders the whole interlude with the appearance of the "future man" (Sabin Smith [?] of Bigfoot Wars [2014 / trailer]) illogical, as the wires could have been sent down into the cave from the start instead of the future man. Indeed, one can only wonder why those who control the wires choose to save all our characters but not their own man...