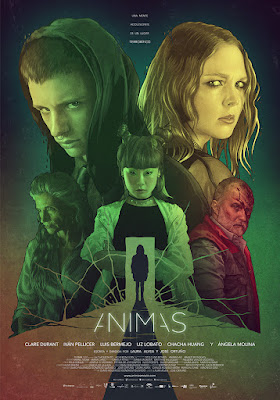 Based on José Ortuño's (Spanish language) novel of the same name, Ánimas is a flawed but highly intriguing Spanish art-horror film that seems to be a love-it-or-hate-it experience. Within the tapestry of the movie's often neon green and red color scheme and lighting, and the retro, grungy, neo-noir prop and stage design, a relatively slight but nevertheless intriguing narrative involving a limited cast of six main faces unfolds, a dreamy tale undulant of teenage angst, broken homes, abusive families, and unsaid and indistinct horrors that has more in common with surreally unsettling films like Jacob's Ladder (1990 / trailer) or  The Attic Expeditions (2001 / trailer) than the traditional run-of-the-mill, relatively conventional horror films that tend fill the market today. 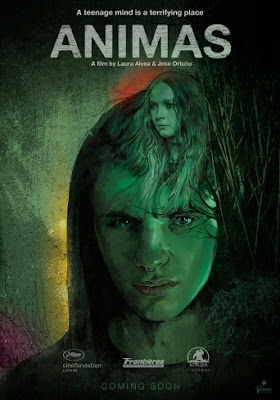 Spanish trailer to
Ánimas:
Ánimas opens by introducing us to Bram as a little boy, seeking refuge on the stairwell of a rundown apartment building from his abusive father, who has just broken the child's beloved yo-yo and is loudly releasing the rest of his rage on his wife (and Bram's mother) behind the closed apartment doors. It is here that Bram first meets the same-aged Alex, a neighboring little girl who teaches him the trick she uses to calm herself down in times of need — and thus the two form a friendship, one as tight as it is symbiotic, that obviously spans the years unbroken: we next see them again as late teens, on the cusp of adulthood, at school as Alex (Clare Durant of The Malevolent [2016 / trailer]) motivates Bram (Iván Pellicer) to muster his courage to approach the Asian classmate Anchi (Chacha Huang), with whom he soon forms a relationship.

Anchi, much like Bram's mother (Liz Lobato of The Birthday [2004 / trailer]) and his shrink, Karla Berger (Ángela Molina), expresses an antipathy against his platonic best friend, one that long remains baseless or incomprehensible to the viewer. Like Bram, Alex is seemingly nothing more than yet another troubled teen, admittedly one with a penchant for self-mutilation, but hardly a figure that could be viewed as automatically inviting dislike. And while Bram may have an abusive father (Luis Bermejo) to deal with, not to mention a distant and suicidal mother, Alex is faced by a threatening shadow and a dangerously bending reality, not to mention thorough desertion by her unseen mother, who literally moves out overnight taking everything with her.

Unluckily, just when it seems that Alex is in need of similar constructive support to that which she has give Bram over the years, he is in less and less need of (and has less time for) his former best friend.

Truly terrifying, Ánimas is not; and many of the scares are somewhat generic if not predictable. Even the final resolution is, to an extent, not all that unexpected to the truly observant. But visually, the film is a slow burn that is both fascinating and compelling, and it pushes at the boundaries of what is normally considered acceptable within a "realistic" horror film, be it the set design or the mood-inducing (and symbolic) lighting. And even if the narrative is a bit muddled, in retrospect one cannot help but realize that it is appropriate to the denouncement. 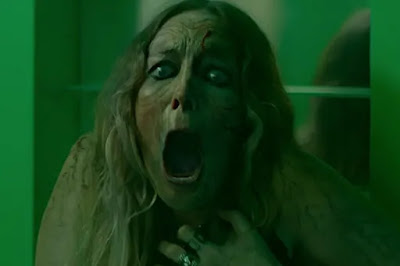 One might argue that Ánimas is, in the end, an exercise of style over substance, but the argument of whether one is better than the other is an argument that often raises its head within the arts, be it films or painting or literature, but has yet to be answered unequivocally. (If you like Van Gogh or Thomas Hart Benton, does that mean you aren't allowed to like Jeff Koons or Ai Weiwei? If you enjoy movies Last Year at Marienbad [1961 / trailer], are you not permitted to enjoy Guardians of the Galaxy [2014 / trailer]? Like Brazilian fish taco, no hairy cheese sausage?)

Any argument, whether pro or con, must, however, give credit to the filmmakers for at least trying to bend the rules of the very genre that they are obviously both well-informed about and respect. What's more, as light as its plotline might be, Ánimas obviously does not view the viewer as unintelligent. That alone is a rarity in film, as is the movie's wonderfully immersive mise-en-scene. 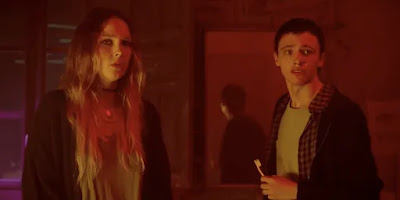 Hardly nondescript, easy-to-accept cinematic fodder, the movie will best appeal to those who like their movies different. Imagine a lazy, no-budget Wes Anderson directing a Spanish-language horror thriller, and then you get a slight idea of what to expect. We recommend Ánimas, but we don't expect you to like it.