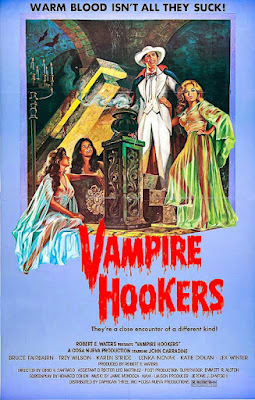 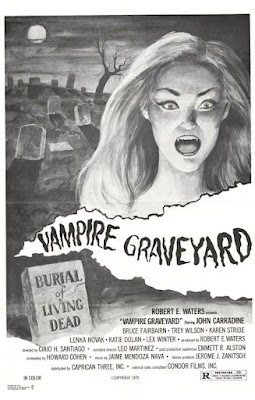 In the theatres and on the video shop self, Vampire Hookers (aka Vampire Hookers of Horror) was found under diverse titles, including Ladies of the Night, Night of the Bloodsuckers, Sensuous Vampires, Graveyard Tramps, Twice Bitten and more — currently, as we write this (18 Jan 21), it can be found on Amazon Prime under its Vampire Playgirls moniker. 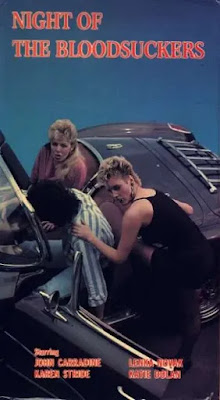 Trailer to
Vampire Hookers:
Over at the Science Fiction, Horror and Fantasy Film Review, which by saying that they "suspect that Vampire Hookers might have been better off as a comedy" reveal the startling fact that they didn't even realize that it is supposed to be a comedy, one finds a quick plot description: "Two US Navy sailors Tom Buckley (Bruce Fairbairn) and Terry Wayne (Trey Wilson [21 Jan 1948 – 16 Jan 1989] of Raising Arizona [1987 / trailer]) are on shore leave in Manila and looking to get laid. Fellow officer Eddie Taylor (Lex Winter) is set up with Cherish (Karen Stride), a beautiful local girl he meets in a bar. She takes him back to her place — a mausoleum in the local cemetery. Waiting there is the aging vampire Richmond Reed* (John Carradine [5 Feb 1906 – 27 Nov 1988] of The Monster Club [1981], Shock Waves [1977], The House of Frankenstein [1944] and so much more) and two other girls [Suzy (Lenka Novak) and Marcy (Katie Dolan)], who proceed to drink Eddie's blood. In trying to find what happened to their friend, Tom and Terry also stumble into the lair of the vampire hookers."
* Trivia: John Carradine's "real" name, as in the one given to him at birth by his parents, was Richard Reed Carradine. 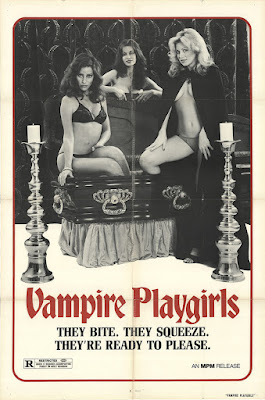 "If you thought the nadir of vampire comedies was Freddie Francis' The Vampire Happening (1971 / trailer) or Carl Schenkel's Dracula Blows His Cool (1979 / trailer), then you haven't experienced Vampire Hookers. [...] Carradine entertains himself spouting Shakespeare throughout [and] in between some of the cheesier lines ('Blood is thicker than water' he says when one of his vampire babes says she would prefer a Scotch and water), but I wouldn't call it any more of a dignified performance than Vincent Price in Bloodbath at the House of Death (1984 / trailer). The other actors are hampered by the script ('It's not murder, it's dinner!') with Fairbairn coming across the best as the straight man while Wilson's Texan fraidy cat is grating. [...] The surprise ending will be no surprise to anyone who has seen The Fearless Vampire Killers (1967 / trailer), The Devil's Wedding Night (1973 / trailer) or either of the Count Yorga films (1970 / trailer & 1971 / trailer). The ubiquitous Vic Diaz (29 Jul 1932 – 15 Sept 2006) is once again on hand, here as moronic wannabe-vampire manservant Pavo who spends much time playing vampire — with a burlap sack cape and fake fangs — and farting. [DVD Drive-In]" 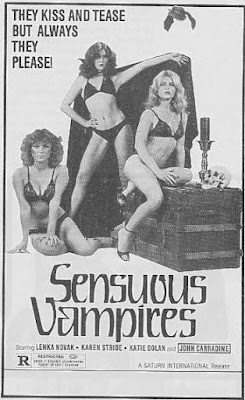 But before we here at a wasted life digress and begin rambling, let's look at the music to this film, both the soundtrack and the title track. The only person credited is the prodigious Bolivian-American composer and conductor Jaime Mendoza-Nava (1 Dec 1925 – 31 May 2005), a talented musician behind the music of a multitude of fondly and not-so-fondly remembered trash projects — including the soundtrack (but not the title song) presented in Film Fun: Music from Movies – The Black Klansman (USA, 1966). We would posit that Mendoza-Nava possibly wrote the music to the title track, Vampire Hookers, though the catchy tune has very little stylistic congruency to the composer's normal music. (Likewise, Mendoza-Nava was never known as a lyricist, so it is extremely doubtful that he wrote the fabulously tacky lyrics.) Try as we might, the identity of the singer remains a mystery we could not solve — indeed, online there is almost zero information about the song, which also seems to never to have had a release on vinyl (for which the world is definitely a culturally poorer place). We were able, however, to find the lyrics, which we present further below. 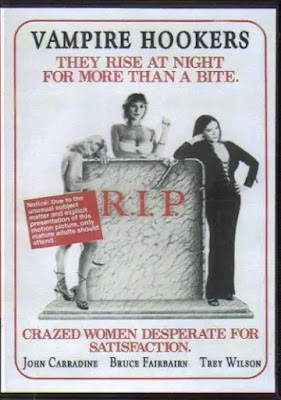 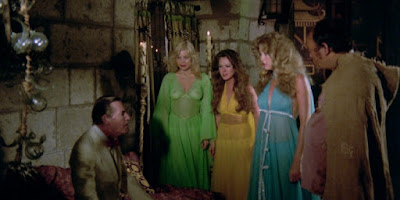 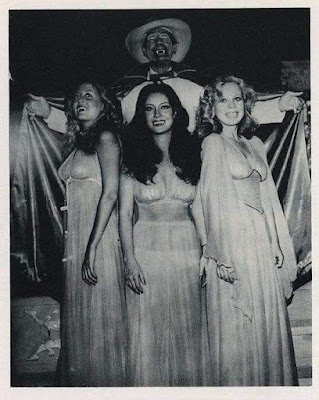 Of the three titular vampire hookers, Marcy (Katie Dolan) and Cherish (Karen Stride) came from and returned to obscurity with this relatively obscure film, though brunette Karen Stride did do some nude modeling and had negligible to minor appearances in three other even more obscure movies: the blackly funny Runaway Nightmare (1982 / trailer), the lost Stella Stevens vehicle Ladies Night (1983), and Three-Way Weekend (1979). The third vampire hooker, the blonde Suzy (Lenka Novak), does however deserve a second look, if only because she exuded an aura in her few film appearances that indicated that her talent lay not just in the jiggle of her inviting breasts. (We mention her in passing in our Babe of Yesteryear entries Uschi Digard, Part X: 1977 and Marilyn Joi, Part IV: 1977-80.) 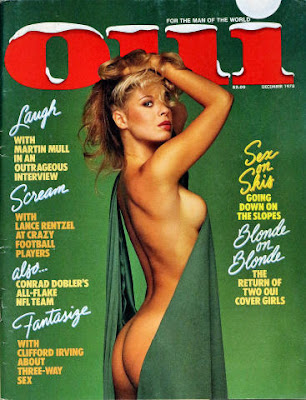 Lenka Novak — that's her above on the cover of the Dec 78 issue of Oui magazine — had a very brief career before disappearing, but she is remembered by many for her absolutely unforgettable appearance in the classic "Catholic High School Girls In Trouble" skit found in Kentucky Fried Movie (1977 / trailer), the skit we look at in both Babe of Yesteryear entries mentioned above. She has an un-credited appearance in some of the footage Al Adamson shot and added to Käpt'n Rauhbein aus St. Pauli (1971 / a song) to make Nurses for Sale (trailer), a film we glance at in R.I.P. Heinz Reincke and Janine Reynaud, Part II – 1969-2000, but alongside Vampire Hookers, all her major credited film appearances happened between 77 & 79:  Moonshine County Express (1977 / trailer), Coach (1978 / trailer) and, credited as Hana Byrbo, The Great American Girl Robbery (1979 / trailer), the last of which is also looked at in Marilyn Joi, Part IV: 1977-80. But then, Ms. Novak disappeared… until 1988, when she suddenly reappeared one last time for a small part in the unknown horror comedy, Slaughterhouse Rock (1988 / trailer) and then disappeared again. 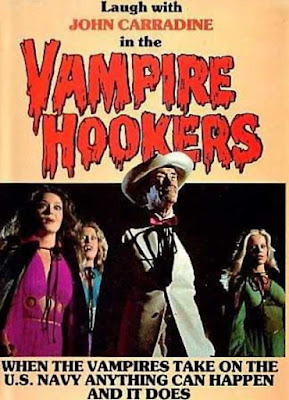 To the common knowledge reiterated above, we might add: Prior to Lenka Novak's short film career, as Olivia Paddon (and occasionally Olivia Elliot or Lonka Berova) she was extremely active in Europe as what would now be considered an often under-age glamour model. (The collection of 50 different cover appearances was found at Vintage Erotica.) Boobepedia lists her place of birth as Shrewsbury, UK, but most other sites say she is of Scandinavian origin. In 2019, JR-Sploitation was nice enough to claim: "Lenka is still alive and well and residing in the Los Angeles area. She is a very active person and enjoys the outdoors, traveling and hiking. She is 62 years old now and was from Sweden originally. She started her career off as a nude model over in Europe [...]. This was several years before her Playboy appearance and was also in several other US nudie mags such as Oui and Juggs. She got married at the end of the 80s and started a family afterwards and decided to drop out of the public spotlight." 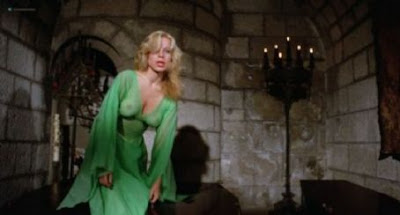 Anyways, should you ever get around to actually watching Vampire Hookers and find yourself liking it, then let us briefly draw your attention to the film's scriptwriter Howard R. Cohen (12 Aug 1942 – 3 Apr 1999). He went on to write and direct diverse films of greater and lesser non-note, including a guilty pleasure of ours, the more funny than it deserves to be if not downright quaint PG-rated horror comedy Saturday the 14th (1981 / trailer); a film we think sucks, Space Raiders (1983); and a breast-centric cult-film fav, Barbarian Queen (1985 / trailer). (The last film, you might recall, features the actress Lana Jean Clarkson [5 Apr 1962 – 3 Feb 2003], whose star was already fading when she met her tragic end at the wrong side of Phil Spector's gun.) At the same time that Cohen & Santiago made Vampire Hookers, they also joined forces to make the cult samurai Blaxploitation film, Death Force (1978). Both VH & DF were shown together as a double bill at more than one low-rent movie house (which is perhaps why Vinegar Syndrome combined them for a double DVD release in 2013). 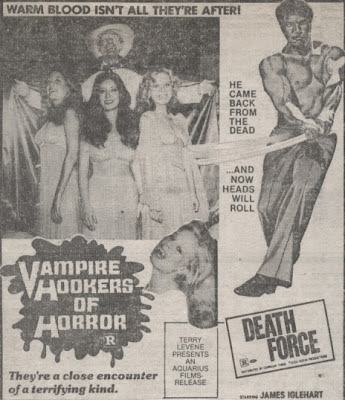