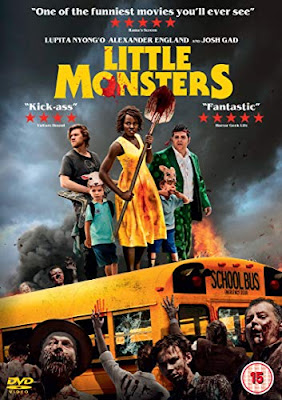 An enjoyable rom-zom-com that is much better than it should be, above all due to the screen presence of Lupita Nyong'o (of Us [2019 / trailer]), looking absolutely smashing in her yellow summer dress, an actress who, like Anya Taylor-Joy (of The Witch [2015 / trailer] & Marrowbone [2017 / trailer]), is as talented as she is eye candy and who tends to steal all scenes simply by being in them. But while Nyong'o does definitely take over the movie once she appears as kindergarten teacher Miss Caroline, the initial main focus of the arguably mistitled Little Monsters — a title that would better apply to a film like Cooties (2014), where the kids do indeed become little monsters, than a film like this in which all the brats are actually ideal children and never turn — is on a loser dickwad named Dave (Alexander England).
Trailer to
Little Monsters:
An irresponsible and washed-up guitarist who still dreams of making it big one day with his band, despite the fact that the band has long disbanded, for much of the film he is interested in no one but himself. And he isn't very interesting. In that sense, Little Monsters is as much about him growing as a person as it is about a zombie outbreak, an outbreak which, combined with Miss Caroline's dedication to her job and duty to keep her children safe (and her breathtakingly wholesome allure), as well as the unquestioning and innocent respect and camaraderie that Dave's young nephew Felix (Diesel La Torraca) gives Dave, acts as the catalyst to make the self-involved, late-20-something-year-old become a meaningful member of society, if not a viable candidate for a job as an elementary school class assistant. (Do schools still even have class assistants?) Oh, yeah: and get the girl. 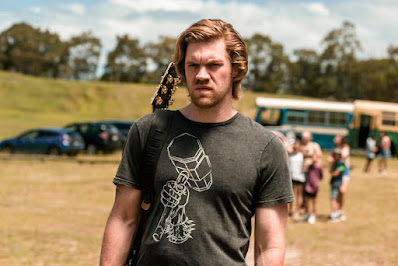 Dave is introduced during the credits, which show him and his girlfriend obnoxiously arguing nonstop is a series of social situations – a caustically funny (if annoying) opening that offers a good reflection of a relationship from hell. (Realistic enough that if you've ever had a similar relationship, you might be tempted to watch a different film. Don't.) 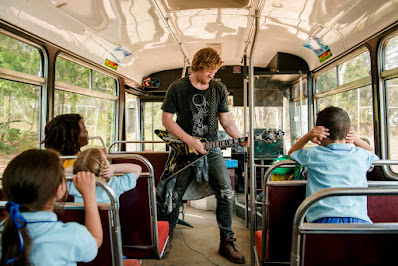 As a self-fixated enabler and egoist, Dave is not observant enough to realize his own role in the lost cause, and once it implodes and he ends up on the couch of his working single-mom sister, he can only think about getting back together again. (One can only wonder why anyone would want to be with him, though; his ex, in any event, is a lot easier to understand as a person than he, but she is in the end a less-than-tertiary character that disappears once no longer needed.) 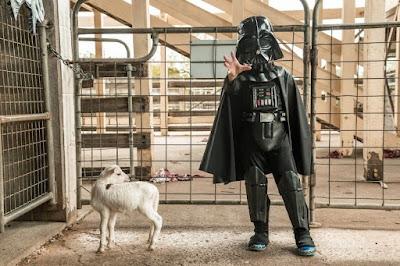 His Darth Vader-fixated young nephew is more than willing to help, which sets up the first truly funny scene of the movie. Indeed, there is no scene in which Darth Vader appears that does not work, including one in which a substantial amount of dread leads up to a cute (if not highly relieving) resolution. 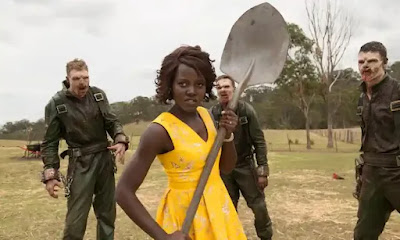 The movie hits its stride when Felix's kindergarten class, headed by Miss Caroline, takes a day trip to a nature farm where the popular kid's show host Teddy McGiggle (Josh Gad) is making an appearance. Dave, smitten Miss Caroline (what cis-gender male wouldn't be?), finagles his way onto the bus as chaperone in the hope of getting the gal — a goal he would probably be doomed to fail at, were the shit not to hit the fan. Even as they arrive, a zombie outbreak occurs at a nearby military base, and before long Dave, Miss Caroline and the class appear to be the only people at the nature park who aren't zombies.

And it is at that point that film truly becomes enjoyable. It doesn't exactly skimp on the blood, as the undead are as hungry as they are slow walkers, but most of the death and gore occurs or is led up to in a manner that easily and often garners smiles and laughs, and most if not all of the dialogue is trenchant and funny. And as for Miss Caroline, she might be a sunshine babe, but behind that sweet and polite demeanor is a strong woman with a definite sense of responsibility, and it is just as much fun to watch how she uses her teacher skills to save her kids as it is to see her get her dress blood-drenched through decisive hands-on action. (That woman is a keeper!) 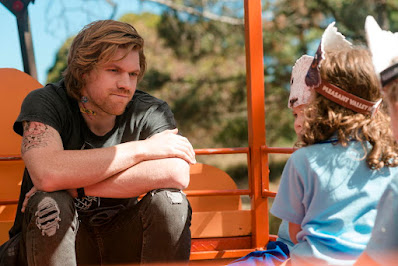 And her dedication and resolve does something to Dave, as well: it helps him grow beyond himself, take on responsibility, actively get involved in saving the children and not just himself. His growth and corresponding actions are also played well against the only other adult that has survived the zombie outbreak, the kid-hating and even-more self-obsessed kid's show host Teddy McGiggles, a man who would be willing to let a whole class of kids become zombie fodder before opening a door and allowing them to enter a "safe" refuge. 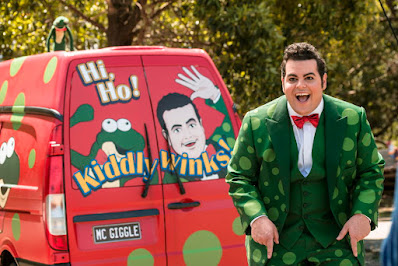 As is often the case, however, the final resolution is less than satisfying. They manner in which they escape, and the sheer luck that intervenes and plays a role in their survival, are both perfectly acceptable and humorous enough to be in line with the narrative development of the whole movie. The mounting tension regarding how the military might react as they get closer to the edges of the outbreak area is also well-cultivated, even as the situation of the class garners giggles. What doesn't work is the last five minutes, when the military talk to the parents and then everyone goes to see the survivors behind glass in quarantine. True, what one sees is only the culmination of Dave's journey to becoming a better person, but it nevertheless feels fake and too sugary. It is an ending that screams "rewrite me", and that shows that no one was listening. It's a shame that after all that preceded that scene, the filmmakers couldn't come up with a resolution a bit less G-rated and grating.

For all the good and bad of Little Monsters, it is on the whole and enjoyable zom com, one that you can even watch with your non-zombie-loving relationship. (Even more so than that other rom-zom-com for non-zombie-loving significant others, Warm Bodies [2013 / trailer].) But truth be told, were it not for the way Lupita Nyong'o literally steals the show and lights up every scene she's in (all the while remaining believable as a character), the movie would probably be a failure. She is an actor to watch, as she has talent to spare. 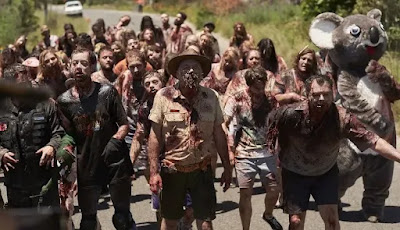