Back in 1982, Jim Wynorski entered the realm of low-budget Hollywood filmmaking when Roger Corman produced a script he had co-written with R. J. Robertson. The gore-heavy film, Forbidden World, one of the more outrageously entertaining Alien rip-offs ever, flickered across grindhouse screens that same year, grossing out enough people to fill Corman’s pocket with some extra change. Corman, always ready to take advantage of any new filmmaker willing to work cheaply, soon had Wynorski sitting in the director’s chair for a variety of low-budget productions, including one of Angie Dickenson’s most embarrassing projects, Big Bad Mama II (1987), and the abysmal remake of Not of this Earth (1988), Traci Lords’ unbearable first foray into non-porn film making (though she still did shake her attractively natural big floppers a lot in the film). In more than one interview Jim Wynorski has claimed that he loves working in the realm of low-budget film because he himself likes movies with lots of naked babes. (Often enough, it is the naked babes—of which there are way too few in this direct-to-video turd—that are the best aspect of his films.) Indeed, according to Maitland McDonagh in Filmmaking on the Fringe, Wynorski is the “first to admit (that) he got into movies to make money and get laid.”

When it comes to Vampirella, one can’t help but feel that whatever money he made, he made too much, and that even if he didn’t fuck any of the women in the film, he sure did fuck up the film and fuck over the audience. For despite the supposed presence of Vampirella’s creator Forrest J. Ackerman as Associate Producer, this film presentation of one of the all-time classic characters of 1970s b&w pulp comic magazines does the character no justice, and is painful for anyone who remembers Vampi’s vintage years to watch. (As for the fans of the revamped 4-color comic Vampirella, they won’t find the flick any better.)
That said, it must also be admitted that Wynorski’s Vampirella is so unbelievably bad, so mind bogglingly pathetic, it could easily one day become a classic of Golden Turkey Cinema, along the lines of Robot Monster (1953) or Santa Clause Conquers the Martians (1964). Nothing works in this film: not the acting, the music, the costumes, the story, the special effects or the direction—maybe one can say that they at least managed to film Vampirella in focus, but since the movie is painful to watch in every other aspect, it really doesn’t matter. Hard to believe that scriptwriter Gary Gerani also penned the entertaining Pumpkinhead (1988), his only other script credit to date.

Vampirella starts long, long ago in a galaxy far, far away, on the planet of Drakulon, where the blood imbibing New Age Drakolonians take their nourishment from the natural rivers of blood that flow freely on their planet. Vlad (Roger Daltrey), the leader of a cult that has reverted to drinking blood from the living, is to be sentenced for his crimes by the magistrates of Drakulon. Three of his followers help him escape and along the way they kill all the magistrates, including the Head Magistrate, the father of Ella (Talisa Soto). Against her father’s dying wish that she not seek revenge and with the help of her mother, Ella dons a cheap looking red plastic one-piece and follows Vlad’s spaceship to earth, taking a short 30,000 year detour to Mars when the cardboard control panel of her ship explodes and she crash lands on the fourth planet. (Amongst other reasons given, it has been said that the weird bastardization of Vampi’s original costume that Soto wears in the film was required because the actress couldn’t do any fight scenes without everything popping out. Seeing how little she actually has, that excuse seems doubtful. Considering how ridiculously stupid every outfit in the film looks, a more viable excuse for the impressively lame wardrobe is simply that costume designer Roxanne Miller got her job because of something other than talent.) Brought back to earth by John Landis and some other dork, she takes on the name Vampirella before killing one of the bad guys who killed her Daddy. Soon thereafter, she finds out that Vlad, now wearing an embarrassingly idiotic hairpiece, is a rock star named Johnny Blood. Going to one of his shows, Vampirella ignores Forrest J. Ackermann’s prancing in the background and sits through one truly abysmal rock song (performed by one washed up Roger Daltrey) before she hooks up with Blood, intent on revenge. But before she can do anything, Blood first beats her up as foreplay and then they both get busted by agents from Operation: Purge, a secret governmental agency out to destroy all vampires. Joining forces with Purge, Vampirella tries to get top agent Adam Van Helsing (Richard Joseph Paul) interested in exchanging some body fluids other than blood, but before she can convince him that her intentions are honorable, he gets kidnapped by two stacked blond vampires. 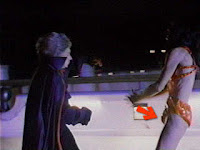 (Either one, if they were brunettes, physically closer to the real Vampi than Soto is.) Eventually, just as Vlad and his world wide web of evil industrialist vampire cronies are about to put their big plan into action and bring eternal darkness to the planet, everyone ends up on Vlad’s coral somewhere in Nevada for the big showdown. Vampirella and Vlad fly off to the Hoover Dam for a laughable chase scene and a hilarious fight-to-the-end, during which Vampirella’s body size not only keeps changing but she develops a noticeable bulge in her crotch.....
Talisa Soto, a 1967 product of Brooklyn, has proven her inability to act with parts of varying importance in such films as License to Kill (1989), The Mambo Kings (1992) and Mortal Kombat (1995). Though she might still live up to People magazines (1990) opinion that she is one of “The Most Beautiful People In The World,” in Vampirella she is woefully miscast, lacking any and all the voluptuous excesses of the Vampirella we all know and love. Her obvious lack of pulchritude is only exceeded by her definite lack in acting talent, her inability to emote easily matching that of Roger Daltrey. Has that man no shame? Why didn’t he die before he got old so as to save himself from such an ignoble fate as to star in a film like this? While Daltrey’s thespian inabilities are easy enough to overlook in such visually over the top excesses as Kurt Russell’s film version of 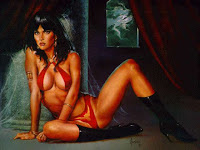 The Who’s rock opera Tommy (1975) or Russell’s even more unbelievably immoderate Lisztomania (1975), in Vampirella his obvious lack of talent is repulsively pathetic. As for Wynorski, whatever he got paid for doing this film, he got too much.
What a horrible film....if you must watch it, make sure you have a lot of beer and a lot of pot close by. Otherwise, your time is better spent on something more fun, like going down on the fat lady next door while she’s on the rag.
Posted by Abraham at 4:12:00 PM