When it comes to a film like Basket Case, the question arises whether there is really any reason at all to write yet another review of one of the true classics of 1980’s fringe moviedom. But, shit, I love this film, so I want my chance to sing my short song of praise to the first of Frank Henenlotter's two masterpieces. His other true masterpiece is Brain Damage (1988), which is also his second film. Since then his films have ranged from lightly entertaining (Frankenhooker (1990)) to possibly unnecessary (Basket Case 2 (1990) & Basket Case 3: The Progeny (1992), but even his less successful products exudes more idiosyncratic individuality than 1,000 normal teen horror flicks, despite having a film budget below that of almost any given direct-to-dvd teen slasher (according to the book Filmmaking on the Fringe, while the total production budget for Basket Case was around $155,000, the actual filming itself only cost $35,000.)

Basket Case opens with a brief prologue in which we get to see Dr. Julius Lifflander (the only known feature film appearance by Bill Freeman, an 11-time American League All Star who played catcher and first base for the Detroit Tigers from 1961-1976) get killed by an unseen assailant. The credits roll as Duane Bradley (Kevin Van Hentenryck) arrives to Times Square and takes a room is a sleazy hotel filled with "personalities." A naive, pleasantly friendly and ingenuous young man, Kevin has little with him but a big wad of cash and an over-sized wicker basket. "What’s in the basket?" is an oft-placed question, and in no short time the answer is revealed: Belial, Duane’s malformed and twisted freak brother. Originally Siamese Twins, the two are bent on getting revenge on the doctors that separated them in their childhood during an illegal nighttime operation on a kitchen table—one doctor eventually even turns out to be a veterinarian! 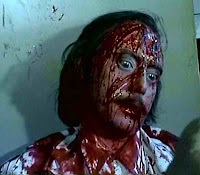 What follows is sleazy, grotesque and cheaply-made revenge film that is as easy to enjoy for its imaginatively extreme humor and squalid violence as it is to view as a grindhouse intellectualization of the human condition. (A few of the numerous questions film poses include: How does one measure "evil"? At what point does the urge for revenge become unbridled bloodthirst? Can you kill evil without eventually becoming evil? At what point do you become that which you hate?) Somewhere between dead doctors and mutilated thieves Duane finds love in Sharon, a receptionist with truly lousy hair (played by Terri Susan Smith, who seemingly never made another film), a situation that riles both the anger and envy of Belial and eventually leads to two of the films more infamous and controversial scenes: the full frontal dream sequence of Duane running down empty NYC streets and Belial pumping away between the bloody crotch of a dead and naked innocent. (Why the frontal gets so much attention is hard to understand—I mean, it’s just some guy running naked—but the necrophilic sex scene does make one shudder.) The depressing ending is hardly as final as it appears, of course, for as is common knowledge two inferior but interesting sequels followed. In all truth, a person really shouldn’t bother reading about this film; a person should simply go see it. It is, like all Henenlotter’s films, an obvious labor of love and, alongside Henenlotter's other sleazy love child Brain Damage, Basket Case is one of the most entertainingly sick and unique film products of the last quarter of the 20th century. Perverse puerility and tastelessness aside, if art is measured by individuality and personal vision, then the day will surely come when the National Film Registry is going to add this baby to its collection, placing it somewhere between Eraserhead (1977) and Night of the Living Dead (1968)—if it hasn't already. Backet Case is in no way recommended viewing: it is required viewing.
Posted by Abraham at 4:49:00 PM