Directed by Vincent Kok, Bor lei jun—a.k.a. Under Control and Gorgeous—is a sub-standard Jackie Chan entry that can only be described as a waste of time. Trimmed by over twenty minutes for the US and European market, one can only imagine that the full two-hour version must be positively sleep inducing. The film generates a lot of laughs not because it is funny, but because it is so bad that one has a hard time believing it was actually made. A comic romance with occasional action interludes, the film never surpasses the level of anything other than a child's film, but the excessive romance aspects will drive the average young boy to screaming distraction. Bor lei jun is best suited for young girls dreaming of prince charming, and, in fact, the film is built around a young girl named Ah Bu (Qi Shu, the babe from The Transporter (2002)) who not only dreams of prince charming, but actually gets him (Jacki Chan as C. N. Chan). 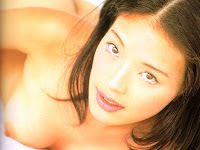 That there is a 22-year age difference between the two wouldn't be too bothersome if it weren't that the female object of beauty comes across less as an actual 23-year-old than as an exceedingly immature and young teenager. Qi Shu is indeed a beautiful sight to see, but she looks and acts so young that in the end of the movie Chan comes across less a prince charming than as a child molester—or at least as an emotionally stunted and immature pervert.
The movie tells of Bu, a young girl living in a small Taiwan coastal fishing village who dreams of perfect love.

When she finds a corked bottle floating in the bay containing a love letter from someone named "Albert" in Hong Kong, she hops on the next airplane for the big city in search of the man of her dreams. Unluckily, Albert (Tony Leung Chiu Wai) turns out to be a three dollar bill. Soon thereafter Bu meets up with Chan, a super-rich, playboy securities player and corporate boss who is both single and, deep inside, rather alone and in need of love. Chan has a love/hate friendship with his old school chum L.W. Lo (Emil Chan), who is also a rich, playboy corporate boss. Bu decides she must have Chan, and with the help of Albert and his numerous true but fey friends, she finagles her way back into his company, posing as a sought for mob-girlfriend on the run. There are a few typical Jackie Chan fight scenes interspersed throughout the film, but for the most part they seem forced and do nothing to improve the film.

True, the two fight scenes against Allan (Bradley James Allan) are very good—the guy actually manages to even upstage Chan—but two good fight scenes do not make a film interesting.
Bor lei jun is product and nothing more. Much like a by-the-number television flick, the movie has everything one expects in a movie that connects the dots, including no creativity or anything to hold your interest. To be avoided at all costs, unless you suffer from insomnia.

(Note: The photos of the lead female that are featured here in this article come from the Net and DO NOT come from the film… had they, the film would’ve been much more entertaining.)