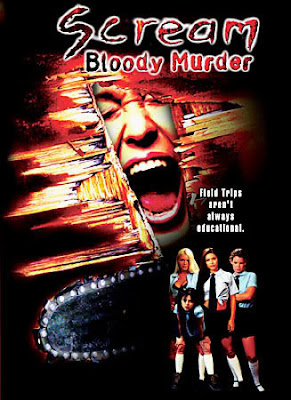 (The following trailer for Scream Bloody Murder is the perfect example of how not to make a trailer. If you have any intention of ever even bothering to see this film, don't watch the trailer, as it reveals everything that happens, right down to the big denouncement and twist. Not good. If this were a film school project, the trailer would get an F minus.)

"I don't think you're too lame to kill somebody."
Beaumont (Drew Droege) 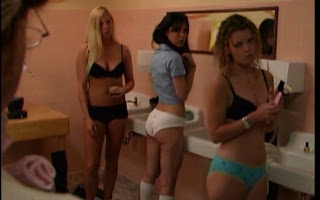 Just so you know, the Scream Bloody Murder discussed here is not legendary and legendarily brainless and gory 1973 cult slasher about Matthew hook-handed killer (trailer). Sorry. The film in question in this review, also entitled Scream Bloody Murder, is the unknown and somewhat brainless direct-to-DVD debut film of director John Hoffman, who followed up two years later with the less-unknown but generally dissed direct-to-DVD flick Scarred (2005 / trailer), which he co-directed with Dave Rock, Hoffman's co-scribe for Scream Bloody Murder. Rock is still around editing films; who know where Hoffman is. Making trailers, maybe? 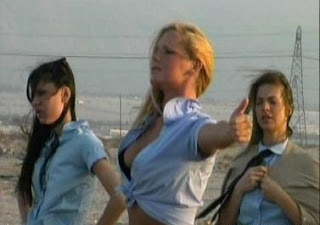 Scream Bloody Murder is an oddly endearing if totally stupid and extremely ineptly made horror spoof. Oddly enough, as flawed as the film is, it is also inexplicable appealing. Aside from actually generating a number of hearty laughs and an equal number of light giggles, the ending alone is justly noteworthy: it truly and effectively takes the piss out of both the twist ending and typically obtuse explanation of the killer's motivation found in 99% of all body-count and dead-teenager films. For that alone, Scream Bloody Murder is hard to hate completely, no matter how many directorial and technical and narrative flaws it might have. Besides, even if the film never does come anywhere close to showing nipple, who can really hate a film that features 6 nubiles in private school uniforms (as in: mini-dresses) terrorized by an unseen killer? I sure can't. Them girls there be all so durn cute… Here, kitty, kitty, kitty!
Of course, as might be expected, none of them jail-bait babes have since done any other film project of any note. 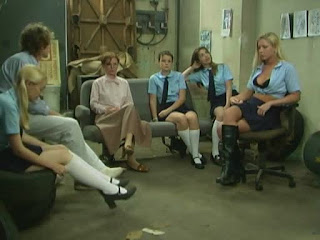 Five girls from the private all-girls Cherry Mount Academy are set to leave to go to a dance at an all-boys academy, chaperoned by the uptight Miss Beaver (Tara Thomson). Just prior to leaving the academy, Principal Burden (voice-over artist Michael McConnohie, who supplied the voice to the titular Vampire Hunter D [1985], amongst others) ups the count to six by adding a new, bitchy transfer student from Alaska. Along the way to ballroom mania their van breaks down in the middle of the desert and a sub-mental man with a tow truck ends up towing them to his nearby automobile graveyard where he says he'll repair the van. Before you know it, they are being offed one-by-one by an unknown killer and have no means of escape.... 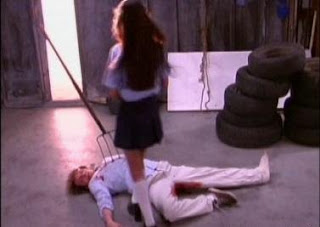 Pretty generic plot, huh? But that would be the point, wouldn't it? Needless to say, all characters are stereotypes, so much so that it is surprising that Hoffman didn't literally label them by type with superimposed descriptions – "The Goth," "The Bitch," etc. – as was done in the much better made but less enjoyable semi-spoof Demon Slayer (2003). It is also odd, considering the light gore and "adult" dialog, that not one of the nubiles ever got past their showing their bras – the lesbian scenes, for example, despite the almost childish way they were dealt with, fairly moaned for more nudity. But then, the lesbian angle – like the whole virginity bit – was extremely soph-moronic; both aspects come across as if the filmmaker is the type of guy that giggles at words like "kaka" and "pee-pee." Indeed, Scream Bloody Murder is sometimes so adolescent in its humor that it comes across like a kiddy dead-teenager film – but then, it is this childish, unprofessional aspect to the film that also makes it endearing. 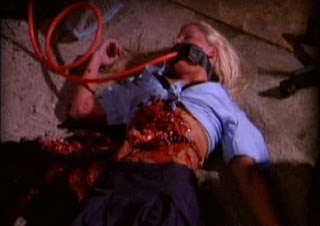 In regard to "horror," the film is about as scary (and as bloody) as a used tampon – in other words, not very scary and there are bloodier things out there even when fit to be used as a Transylvanian teabag. The acting us sitcom level, but cuteness goes a long way to making it bearable, as does the many good one-liners and inspired exchanges. The bitchiness does get tiresome sometimes, and the film would have been well served had Hoffman and Rock cut out more of the endless faux-Agatha-Christie deductions of the unexpected final girl (Stephanie Northrup of Black Magic [2002 / trailer]). Luckily, in-between such stuff the dialog is sometimes truly inspired, both subtly and obviously. Technically, however, the film is a mess – the day-for-night shots, for example, look as if the technique were still in its developmental phase and outdo anything William Beaudine ever did. 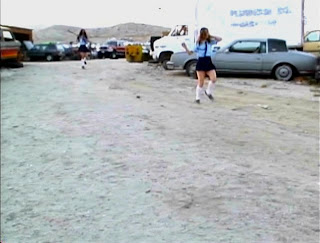 But then, the question does arise whether or not the unprofessionalism is sometimes on purpose; sort of an ironic spoofing of the ineptitude of so many body-count films. This concept almost seems too arty, too intelligent for the film, but the scene in which the first dead teenager goes from dark-haired while alive to blonde when dead is such an extreme fuck-up that it does lend credence to the argument of intentional ineptitude. (But then again, maybe I'm overestimating the abilities and intelligence of the filmmakers here…)
Scream Bloody Murder is not a good film in any sense of the word, but it is an oddly fun and enjoyable one. It's like a Butterfingers candy bar or Mountain Dew: so crappy it's hard not to like it. And it goes great with some good smoke. 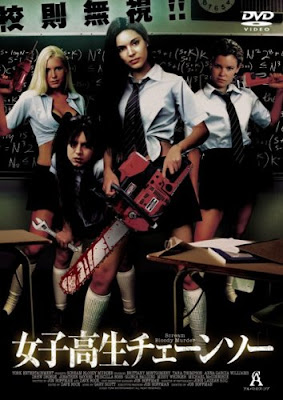