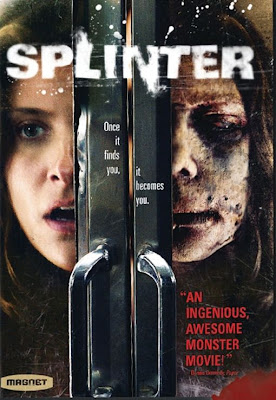 "It's okay, we're cutting your arm off."
Polly Watt 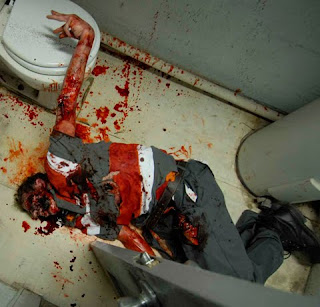 On late-night or mid-afternoon local TV you used to catch them all the time: tight and crisp (usually) B&W sci-fi horror flicks of manly male scientists and their resourceful and dependable wives or fiancés or girlfriends who suddenly get confronted by a danger new and unknown that could destroy the world; often the couple alone must overcome and destroy the menace because no help is on the way, other times the army might be called but it is the sudden insight of the manly male scientist or an off-hand remark of the resourceful and dependable token curves that leads to the world's safety. We're not talking of teen-hero films like The Blob (1958 / trailer) or The Giant Gila Monster (1959 / trailer / full film), which are a genre of their own, but of films with unambiguously manly males and curvaceous but smart women being as brave and intelligent as the social concepts of the time permitted them to be – for example: Them (1954 / trailer), The Monolith Monsters (1957 / trailer), or Tarantula (1955 / trailer / full film). More recent example of the genre – a genre that substantially lost popularity as other genres such as the body count and slasher film grew – would be womanless but nonetheless manly The Thing (1982 / trailer), itself a remake of a far more innocent classic of the genre with woman, The Thing from another World (1951 / trailer), Tremors (1990 / trailer), and Slither (2006 / trailer).

Unlike Tremors and Slither, however, Splinter pretty much jettisons the humor and instead goes for pure tension and horror – and succeeds aces down! Splinter, the debut film of Toby Wilkins, who went on to do the much less interesting and arguably totally unnecessary horror film The Grudge III (2009 / trailer), is very much an updated version of the Jack Arnold and/or Bert I. Gordon and/or Gordon Douglas films of yesteryear. (Indeed, were any of the three named dead dinosaurs living Young Turks in today's film market, they might well be making films like this one.) The script supplied by Ian Shorr and Kai Barry reduces the ingredients of the genre to the barest minimum – tiny cast, deadly and unstoppable danger, isolated location, a vulnerable haven – and the result is a lean and mean and quick monster film that never bores but almost always keeps you at the edge of the seat.

Splinter might be a low budget baby, but its sights are set high and it succeeds at what it aims for: to thrill you, chill you, gross you out and make you feel like you just saw some scary shit. Unlike most films of its ilk, the origin of the titular splinter monster is never explained; it is simply suddenly there – one can easily assume, however, that like most films of the genre the origins of the creature must be astral for otherwise the world would have long gone spiney. But this lack of explanation is typical of the leanness of the film: Why explain something that really doesn't need to be? 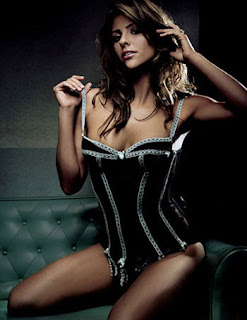 (Some spoilers.) Splinter opens on a sunny day at some backwoods gas station with a brief scene in which the attendant (Charles Baker) falls victim to an attack by something and then, screaming and contorting, begins to bloodily mutate. Then two couples are introduced: a young Starkweather and Fugate on the run named Dennis (Shea Whigham) and Lacy (Rachel Kerbs), whose car dies on them, and the curvaceous wife Polly (Jill Wagner – seen here not as she appears in the film) and her wimpy biologist husband Seth (Paulo Costanzo of Road Trip [2000 / trailer]), who are out on an anniversary camping trip. In no short time, Seth and Polly are the hostages of Dennis and Lacy, and a flat tire later, when their truck overheats, they pull up to an isolated, backwoods gas station... and what starts out almost like a psychos-on-the-loose-takes-hostages film – see The Sadist (1963 / full film), Kalifornia (1993 / trailer) or Perdita Durango (1997 / trailer) – goes hardcore monsters-terrorize-helpless-humans horror instead when the four are confronted by a mutated and aggressive attendant, his bloody body a horrific version of a porcupine, who, as his body contorts to the sound of breaking bones and tearing flesh, attacks and kills Lacy. The other three take refuge within the store, where they see the dead Lacy mutate in front of their eyes into another spine-covered, voracious monster. With no way out and no way to fight back, a bad situation gets worse when Dennis realizes that the splinter he took in his hand while changing the flat tire is beginning to cause his hand to mutate, too... 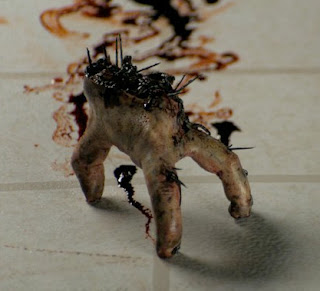 Splinter follows the structure of the classic 50s monster films down to the T, but of course with totally contemporary clothing. Polly is hot, spunky, intelligent and a fighter, but in the end her main function is to be eye-candy – which she is. Her husband might seem like a wimp, but he's the scientist that puts the clues together to explain what the monster is and why it does this or that; by the end of the film, he has won the respect of Dennis as much as Dennis has won his and Polly's respect. Dennis does a fine and convincing job in his transition from psycho to simpatico, complete with an end that would make Hemingway proud.
In all truth, Splinter really doesn't even add anything new to the genre other than the form of the monster, but derivative or traditional or not, the film is an enthralling and well-acted ride, both scary and exciting, and thus it manages to overcome its own traditionalism and occasional narrative flaws – an exacto knife amputation? – to become enjoyable. 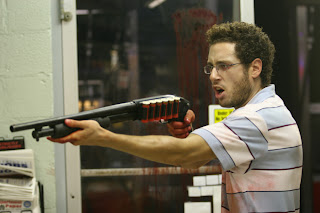 And, damn! Finally: no vampires, no zombies, no unstoppable psycho with a hidden grudge.
One really wonders why, after making a film like this, director Toby Wilkins was "awarded" a project as pointless as The Grudge III.
Posted by Abraham at 10:16:00 AM