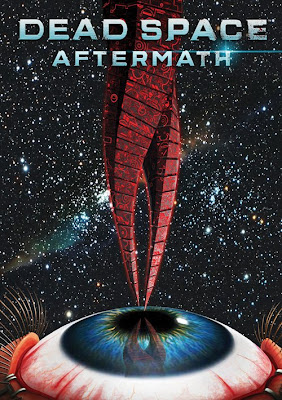 As with so many films, we went into this direct-to-DVD film a total virgin: the only reasons we pulled the movie from our buddy's file of 3-D films were: A) it was an animation science fiction film, and B) it was in 3-D. (The latter has had particular weight in our choice of trashy films to watch these past months, ever since our buddy sunk his dough into a 3-D capable TV set.) Only later, after the film had been watched, did we learn: A) the film is based on a popular computer game, and B) Dead Space: Aftermath is the second of two films based on the game.

But to fill you in a bit on the timeline, the game Dead Space, which features Isaac Clarke, "an engineer who must fight his way through a mining starship infested with hostile, grotesque monstrosities called Necromorphs," was released in 2008 and became a hit; an animated film entitled Dead Space: Downfall (2008 / trailer), a prequel to the game, followed around the same time. This in turn was followed by the computer game Dead Space: Extraction in 2009, which takes place prior to the game it follows and at the same time as Dead Space: Downfall. (Both Dead Space: Downfall and Dead Space: Extraction, by the way, had a six-issue Dead Space comic book prequel that appeared in 2008.) A third game in the series, Dead Space 2, came in 2011 and as a sequel to the first game it once again features Isaac Clarke. The movie at hand here, Dead Space: Aftermath, was released the same year, and is a prequel of sorts to Dead Space 2 – one of its main characters, Nolan Stross, appears in the game subsequent to his fate in the film – that offers some bridges to the continuity of the game.

But does one really have to know all that to be able to watch – and follow – Dead Space: Aftermath? Well, actually, no. Dead Space: Aftermath is extremely understandable, and despite its temporal location in the timeline of the Dead Space universe, the movie functions fine as a standalone product and can be enjoyed as such; it even manages to quickly and understandably present the religious and political aspects important to the series and narrative (the main religion is decidedly non-Christian; the government decidedly totalitarian), thus ensuring that even a total newbie or virgin can follow what's going on.

Dead Space: Aftermath is a fun, trashy, violent animated film, and anyone who likes movies that correspond to one or more of those four adjectives will probably enjoy this movie, too. Nevertheless, on occasion Dead Space: Aftermath did make us think of movies such as They Saved Hitler's Brain (1966 / trailer) or The Queen of Blood (1966 / trailer) or the legendary Night Train to Terror (1985), three films we've enjoyed in the past that are, in theory, not truly films of their own – as in conceived and made as an independent movie. In fact, all three of the films mentioned were cobbled together from other already existing productions of differing levels of completion and padded with additional, newly shot material to bridge any existing narrative gaps. And as entertaining as Dead Space: Aftermath is, it also definitely conveys a similar feeling. The reason that Dead Space: Aftermath does so is because it, like the three film mentioned above, also suffers from an intense visual schizophrenia that is, in the end, severely detrimental to its overall impression: the framing events and the four narratives of the survivors are all from different animation studios, the framing events being rendered in an almost primitive 3-D computer animation style while the four narratives are presented in an anime style comparable to (but less detailed than) that of Vampire Hunter D: Bloodlust (2000). But despite the involvement of five different animation studios, the styles of four character-narrated segments feature enough similarities that they convey a continuity of production which clashes severely with the framing narrative.

Thus, the impression is conveyed that an unfinished film with a continuous storyline that re-edited into a flashback structure and padded with new material created by 3-D computer animation students so as to produce a final product with a viable running time. (This impression is emphasized by the fact that one studio obviously didn't know that the daughter of the token black character was also black, and not manga-white.)

What? You want to know what the movie is about? Well, basically, in deep space an ancient relic is found that totally fucks with your mind. When a small piece of it is brought aboard the USG Bannon, the shit quickly hits the fan and almost everyone dies and mutates into monsters out to rip apart everyone else that is still alive – who then also monsterize. Dead Space: Aftermath opens with the last four survivors, having finally destroyed all the monsters, being "saved" by space marines. The final four are then taken prisoner and tortured and reveal the events that happened in flashback from their own point of view.

As a result of the opening and corresponding flashback structure, you know the semi-final girl and guys in advance so there is no real tension regarding who's gonna die, but the movie makes up for that by doubling up the blood and violence and speed (while, of course, giving only a slight nod to characterization) and at least one scene with typically pneumatic anime tits (though nowhere in proportion to those found on the great Japanese TV show Gakuen Mokushiroku: High School of the Dead [8 minutes]). Dead Space: Aftermath also features some surprisingly depressing turn of events that, like the torture, makes the ruthless Dead Space government seem like a direct descendant of the Umbrella Corporation.

In short: a visually schizo film full of violence and profanity and violence and violence and two-dimensional characters (even when watched in 3-D) and profanity and violence and a lot of sub-plots that remain unexplored and violence and blood. The movie may be about as intellectual challenging as a slug, but we've never been particularly intrigued by films with a message. This is trash, and like a bottle of Jack Daniels or a Viagra tablet,* it does what it is intended to do very well. Dead Space: Aftermath definitely gets a dozen severed thumbs-up from us!
*Want to hear our anti-German joke of the day? We got it off German national television...
Question: Why do German men always take two Viagra tablets?
Answer: Because with the first one, only their right arm goes up.
Posted by Abraham at 12:28:00 PM