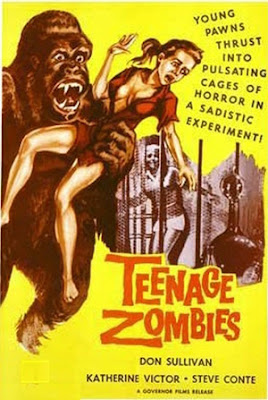 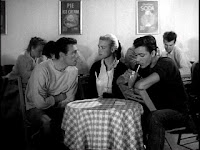 The now mostly disdained 1980 book The Golden Turkey Awards by the Medved Brothers did wonders for the reputation of many a film-maker and film. The book, in case you don't already know – do you live under a rock? – was an early survey of the great turkeys of the film business, both high and low budgeted. An entertaining if condescending read, among other things the book and the Medved Brothers did was help to cement the reputation of the auteur and Outsider director Ed Wood Jr. as the "World's Worst Director," even going so far as to award his film Plan 9 From Outer Space (1959 / trailer / full film), featuring the final appearance of Bela Lugosi, a Golden Turkey as the "Worst Film Ever" – unjust labels in both cases that are still bantered around today.

We won't go into the arguments about what makes Wood (and any of his films, including that film) anything but "the worst," but we do wonder why the Medveds, if they so wanted to present superlatives, didn't do a bit more research when deciding upon the world's worst director and movie, for they not only bypassed a far more productive and lousy director than Wood, they also even missed one of his low points, a film that was released the very same year as Plan 9 From Outer Space and probably even had a comparable shoestring budget. 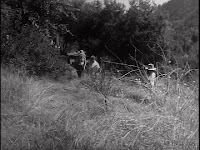 The director we speak of is, of course, Jerry Warren, and the overlooked low budget debacle that was released the same time as Wood's more famous film but that might more justifiably be called "The World's Worst Film" is none other than this disasterpiece, Teenage Zombies (aka Teenage Torture). But then, in all truth, all the films of Jerry Warren, who died in Escondido, CA, of cancer on 21 August 1988, are disasterpieces of unbelievable proportions, so to ladle scorn upon just one film is a bit unjust. And, indeed, he less directed his "movies" than he did usually re-edit stock footage or foreign cheapies and occasionally point a camera for some new footage to flesh out the new non-story, so it is perhaps also a disservice to the term "director" to even refer to Warren as such. That aside, Warren was a master of anti-style and of the anti-film, and Teenage Zombies is a prime example of what he did best: make truly terrible movies. 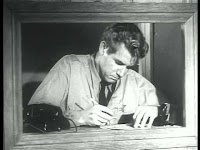 All aspects of Warren's anti-style were all already apparent in full maturity in his first film, 1956's Man Beast (trailer), which Fantastic Movie Musings and Ramblings is kind enough to describe as "probably the best thing Jerry Warren ever did": static camera, wooden acting, flat line delivery, and cheap studio shots that don't match the stock footage and scenes culled from forgotten Z-level Mexican imports. Two films later, with Teenage Zombies, Warren's anti-style really hadn't changed any – indeed, it remained the same all the way up to his outrageously entertaining last film in 1981, Frankenstein Island (full film), which can be considered a remake of and minuscule improvement to Teenage Zombies. Perhaps the only directorial development to be found in Teenage Zombies is that it is the first and one of the few of his movies that seems to forgo the use of any stock footage.

The plot of Teenage Zombies is one of hip-talking teens – including Reg (Don Sullivan of The Monster of Piedras Blancas [1959 / trailer / full film], the ever-popular hot-rod horror The Giant Gila Monster  [1959 / trailer / full film] and The Rebel Set [1959 / full film]), Skip (Paul Pepper), Julie (Mitzie Albertson), and Pam (Brianne Murphy*) – that end up in the clutches of a mad scientist named Dr. Myra (Katherine Victor  of Superguy: Behind the Cape [2000 / trailer], Warren's The Wild World of Batwoman [1966 / trailer], The Cape Canaveral Monsters [1960 / first 9.45 minutes], Invasion of the Animal People [1959 / trailer] and the trash classic Mesa of Lost Women [1953 / trailer / full film]). Dr. Myra, dressed in high-style clothing and a white lab coat and funded by foreign agents from "the East," is working on a gas that should turn everyone in the US into mindless zombies because she doesn't want "the East" to drop the bomb.

(The zombies of this film are not of the contemporary flesh-eating kind, but rather of the mindless we-do-your-bidding kind found in such much better films as White Zombie [1932 / trailer / full film], I Walked with a Zombie [1942 / trailer], or even Zombies on Broadway [1945 / scene]. Two of the teenage girls go zombie all of four minutes in the film, but you don't notice it really because they don't act all that differently from when they weren't zombies.) Of course, the good guys win in the end, but nowhere in the movie is there any sense of suspense or terror, any convincing action or anything that might add any thrill to the film. In fact, there are probably few films out there as dull and as static as this one. 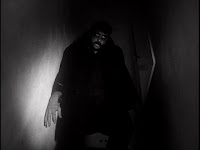 The nonsensical plot includes a zombified henchman named Ivan (an uncredited Chuck Niles, a Jazz disc jockey that has his name on the Hollywood Walk of Fame and later appeared in Nightmare Circus [1974 / fan-made photo trailer]) and a deus ex machina in the form of a "gorilla" (an uncredited Mitch Evans of Gallery of Horror [1967 / full film] and Paul Hunt's The Harem Bunch [1968]) that ends up unwittingly assisting in the escape of the teenagers. In the quality of the ape suit and the sets, the film shows its budget as prominently as a plumber shows the crack of his ass, though a plumber's ass offers more terror and entertainment. There is virtually no action to speak of, with some scenes repeated endlessly (there is a ridge, for example, that the teens run up and down at least six times always shot from the same angle, and the "island" itself seems to consist of only one beach),

and when there finally is the big fight scene Warren's camera seems to remain glued to one location no matter where the actors move to – when they do even move. Indeed, Warren uses the static camera of the classic exploitation mode with long full-frontal scenes and stiff blocking and as little cross-editing as possible; when there is finally a rare if short pan of the camera, it is so unexpected that it actually shocks the viewer more than anything else in the movie does.

In regards to the cinematography, the lighting of some interior shots is so bad that shadows often come across as mysteriously appearing and disappearing appendages or huge tumors, while the B&W photography is shot in three shades of gray. The pompous score of stock music – supposedly taken from the granddaddy of all killer asteroid films Kronos (1957 / trailer / full film) and by Bert Shefter and Paul Sawtell who, among other things, went on to work on the exploitation masterpiece Faster Pussycat! Kill! Kill! [1965 / trailer]) – is unduly bombastic for all the inactivity it underscores, and thus does less to add any suspense or mood than to simply call attention to itself and to how out of place it is.

As for the acting, it veers from being wooden to cheesy without ever coming close to achieving any level of verisimilitude; that many of the actors (J.L.D. Morrison, Mitzie Albertson, Jay Hawk, Nan Green, Don Neeley) never made another film isn't surprising, but what is amazing is that some actually had an acting career of sorts, even if only barely. (Paul "Skip" Pepper was a glorified extra up until the 1980s, while Steve Conte, who plays one of the agents from "the East" that comes to Myra's island to check the progress of her work, was regularly face on the large and small screen for almost a good 40 years.)
Yep, Teenage Zombies is an amazing film. Watch it at your own peril – or when you're trying to get unwanted house guests to leave early. And Medveds: if your book should ever go for a reprint, make sure to update and correct your awards.

** At the time of Teenage Zombies, Brianne Murphy was married to Ralph Brooke, the director of Bloodlust! (1961) – she appears as the dead female body floating in the tank in that film. She married Warren soon after Brooke's death in 1964 and went onto a successful career as cinematographer, even becoming the first female director of photography on a major studio, union picture (the flop that is Fatso [1980 / trailer]). She also directed a sleaze flick of her own, Blood Sabbath (1972 / first 15 minutes), featuring the great Dyanne Thorne. 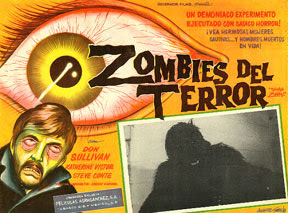 It feels so much longer than it is. It felt like I watching it for a week.

I watched it today on Comet
...it is really as bad as you say...made me want to see Glen or Glenda next just to compare