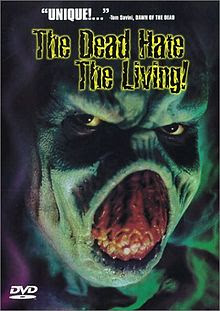 "Why are the hunky guys always dead before I get to meet them?"* 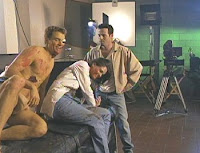 The basic plot of this super-low-budget zombie flick is that a film crew making a no-budget zombie flick in a deserted hospital that they've broken into accidently wake the dead and, as tends to happen, become undead themselves one by one. Long before the mayhem of the film finally begins – and the mayhem really does take a looooooooooong time coming – there is a scene in The Dead Hate the Living! in which the young director of the film, David Poe, (Eric Clawson) tries to reassure Eric (Benjamin P. Morris), the less than bright hunk wannabe-actor playing a zombie in the film-within-the-film that the project at hand will help make him the next Dick Miller – a name that he, like everyone who isn't a true fan of genre films, doesn't know. Not soon after, we for one were convinced that if The Dead Hate the Living! was in any way indicative of the directorial and scriptwriting talents of Dave Parker, the man who wrote and directed the film, then he could well one day be the next Del Tenney – or maybe even Phil Tucker. 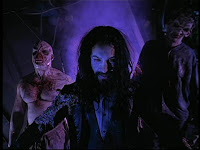 In all truth, however, Parker's film seriously lacks the enjoyable patina that passing generations – almost six in the case of Tucker's Robot Monster (1953 / trailer / full film) and almost five for Tenney's I Eat Your Skin (1964 / full film) – have lent those two infamous and miserable directorial debuts, a patina that helps to make then so enjoyable now. But then, who knows, perhaps age won't even help The Dead Hate the Living! for as bad as it is, it isn't in any way enjoyably bad as, for example, the infamous Troll 2 (1990 / trailer), which is only ten years older (but actually has both better production values and better bad acting and better bad script and, in likelihood, had a bigger budget). 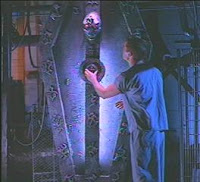 The Dead Hate the Living! drips homage, in its dialogue, in its scenes, in its plot development: it is a film made for horror fans by horror fans. Regrettably, the final product does nothing less than prove that one must be more than just a horror fan to make a good horror movie – or even a good bad horror movie. And as for the horror fans it was made for, well, only the least demanding of them will find the film in any way palatable. Allegedly it was shot on a 10-day shooting schedule and is the first zombie movie produced by Full Moon Entertainment, but nevertheless it makes films such as Dollman (1991 / trailer) or Killjoy (2000 / trailer) – both Full Moon productions made around the same time – look like blockbuster Hollywood productions and the directorial talents of David DeCoteau seem comparable to those of Kubrick. 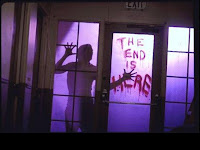 As mentioned before, The Dead Hate the Living! takes forever to get started: over 30 minutes after the short opening scene in which the then still-living Dr. Eibon (Matt Stephens) gets attacked and killed by a zombie – who, considering where Eibon is later found, puts Eibon's body neatly into the portal to hell, unplugs the machine and then goes home to mommy (as that zombie is never seen again). Later, when the young filmmakers find the still not decomposed body in the deserted hospital they're shooting their film in – a deserted hospital that still has electricity – they do the logical thing and use the corpse in their film instead of hightailing away or contacting the police. (We'd sort of forgotten how commonplace it is in the US to find dead people lying around; we tend to think people here in Europe would still either skedaddle or call the cops.) When the filmmakers plug in the portal, they not only revive all sorts of hate-filled zombies (including Eibon), but now the portal also sends the whole hospital to hell – something it obviously was unable to do when the Eibon was killed, otherwise the hospital wouldn't be there for the young filmmakers to make their film in.

These and many other total lapses in logic or natural behavior have to be swallowed whole when watching the film, and it is these very total lapses in logic or natural behavior (alongside its slow pace) that make the film so unbearable – much more so than the dilettantish acting, which is sort of cute after awhile. The genre-referential lines of dialog (like: "What would Bruce Campbell do?") don't bother as much as the various self-referential "jokes" like a line about how they are filming on real film when the film itself is obviously on video;  the entire film-within-a-film scene at the beginning sort of sucks, too. Basically, almost nothing that is meant to be intentionally funny is funny, while the unintentional funny stuff is too far in-between to carry the film. Most of the special effects are passable to good, but when they are bad – like that CGI scene in which some zombies burn away – they deep-throat an elephantiasis-suffered third leg. 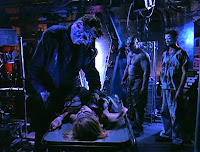 We could easily go for another 10,000 lines about what is wrong with this flick, but it is worth neither the time nor energy. Rest assured, however, there is really nothing about The Dead Hate the Living! that in any way makes it recommendable or worth watching. It is simply another movie to name when you want to pursue that popular (but false) argument that all Full Moon films suck. To put it simply, The Dead Hate the Living! stinks like your fingers when the toilet paper rips while you wipe your ass.
*A statement made in a scene that had us wondering about when it was that Americans became such prudes that they even put underpants on the dead men in the morgue.
Posted by Abraham at 4:20:00 PM

THIS MOVIE IS A COMPLETE PIECE OF SHIT. As I have said, it should have been called, The Film Makers Hate the Audience.

You won't see me contradict your statement... Nice "unwatchables" list – I see we share the same distaste for The Dead and the Damned, too.