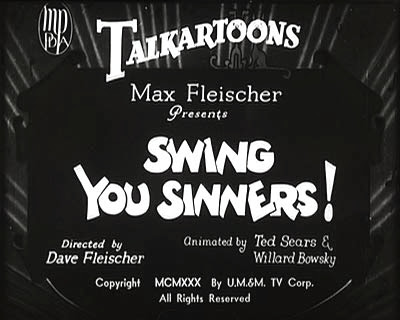 The great master Max Fleischer, the producer behind Betty Boop and so much more, was always good for animated weirdness, as we already revealed last January when we presented one of his weirder early cartoons, Bimbo's Initiation (1931), as the Short Film of the Month. Since then, on one of those rare days when we weren't just surfing the web for porn, we stumbled upon an online article over at Cracked.com entitled 5 Old Children's Cartoons Way Darker Than Most Horror Movies which, aside from also including Bimbo's Initiation as one of the five, also introduced us to this cartoon, the 9th of Fleischer's Talkartoons, Swing You Sinners!, which the website rates as the darkest of them all. As Cracked says, "Officially, LSD was first produced in 1938. We say 'officially' because this cartoon says it's from 1930, and there's no way it was created without massive doses of acid being pumped into everyone involved." Without a doubt, Swing You Sinners! is as weird as it is disturbing, and a perfect short for us to share with you. 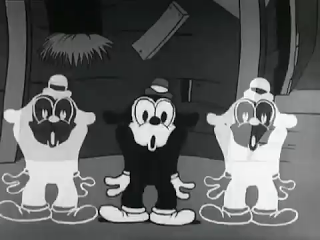 Not that the short would indicate just how weird it is as a whole when it starts, as the first few moments are as generic as it gets, featuring a situation — attempted theft and subsequent chase — that echoes many a later cartoon, be it Bugs Bunny, Tom and Jerry, Sylvester and Tweety, Foghorn Leghorn or any number of lesser- or better-known characters. But just wait until our wanna-be chicken-thief on the run enters the graveyard... Like so many cartoons, a then-current aspect of pop culture plays an integral part of Swing You Sinners! Namely, the hit foxtrot entitled Sing You Sinners (music, W. Franke Harling; lyrics Sam Coslow) from the 1930 movie musical Honey starring Lillian Roth (of Alice, Sweet Alive [1976]). The original song was used again as the title track to the 1938 Bing Crosby movie Sing You Sinners (first 14 minutes) — like Honey, also directed by Wesley Ruggles (11 June 1889 – 8 January 1972) — and, before and since, has been covered dozens of times. The original lyrics, if course, were somewhat changed for the Fleischer cartoon. 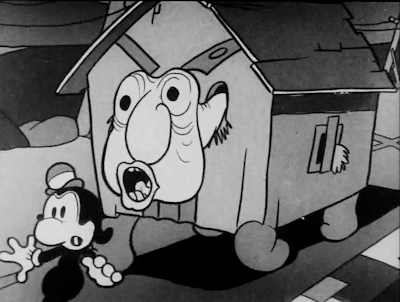 Though the main character in Swing Your Sinners! remains unnamed, he is generally viewed as an another early version of Bimbo, who, if you discount the even earlier (and forgotten) Fleischer dog character Fitz the Dog as a forerunner, had debuted earlier that year in the Talkartoon Hot Dog (1930 / full cartoon) as a skirt-chasing cat-caller — or possibly a john is search of a hooker — but only got his name seven shorts later in Sky Scraping (1930 / full cartoon) and, the following year, his best-known and characteristic appearance in The Herring Murder Case (1931 / full cartoon). Here, although obviously (?) a dog, his nose is oddly reminiscent of how a much more famous mouse looked around that time. 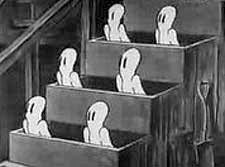 Sing You Sinners by the Harlem Hot Chocolates (1930):

The animation of Swing You Sinners!, credited to Willard Bowsky and Ted Sears, is uneven, varying from primitive to pretty decent,  but the schizophrenia of the drawing only adds to the overall strangeness of the events. But to describe this short as strange is a bit of a disservice, for not only does more than one scene move it into the realm of seriously disturbing and a good two thirds of the short is simply macabre, but the character basically seems to die at the extremely abrupt ending. To put it simply, Swing You Sinners! is a masterpiece of irreal insanity. Enjoy.