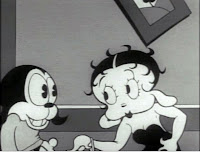 For a long time now we here at A Wasted Life have thought about presenting a Betty Boop cartoon as the Short Film of the Month, but the big problem faced was that there are so many excellent early Betty Boop cartoons out there — especially among the pre-Hays Code productions — that to choose just one is a daunting task.
Those that immediately come to mind are, of course, the great if slightly racist I'll Be Glad When You're Dead You Rascal You (1932 / full cartoon), in which Betty joins her pals Koko and Bimbo for a jungle safari and runs into trouble with cannibals (a very young Louis Armstrong and his band), and Betty Boop's Bamboo Isle (1932 / full short), which features her famous "topless" hula dance, and naturally any of the cartoons featuring Cab Calloway, like The Old Man of the Mountain (1933 / full short) or the classic Minnie the Moocher (1932 / full short), the latter of which indicates a German Jewish ancestry on Betty's part. 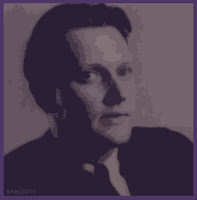 But while going through the Betty Boop films on YouTube, we stumbled upon this oddity, Bimbo's Initiation, which — as the title indicates — is less a Betty Boop vehicle than a Bimbo short. Bimbo was a dog character introduced in Max Fleischer's Out of the Inkwell series (1918 to 1929) that, along with his fellow Out of the Inkwell alumni Koko the Clown, was an early and popular star of the Fleischer animated films. Betty Boop, in her original incarnation with doggy ears (seen above with Bimbo from Bimbo's Initiation) as introduced by her creator Grim Natwick (seen here to the left) in the less-than-spectacular short Dizzy Dishes (1930 / full short), was initially a tertiary character who often served as Bimbo's girlfriend or foil — a good example being her fourth doggy-eared appearance, as "Nan McGrew", in The Bum Bandit (1931 / full short)  in which, despite her doggy ears, she is well on her way to appropriating the look of the non-Betty character Betty Co-ed (1931 / full film) — seen below to the left from the short — to become the good-time gal we all know and love. (If you watch with but a little attention, by the way, you will see a split-second appearance of Mickey Mouse in The Bum Bandit; Mickey, in his early form, appears briefly in many a Fleischer carton, including Bimbo's Initiation.)

Prior to deciding on Bimbo's Initiation, we considered featuring Mysterious Mose (1930 / full short), which is definitely a strange and cool film and also features more of a still-unnamed Betty than Bimbo's Initiation. (In Mysterious Mose, as in B.I., Bimbo is still the credited star of the short; Betty herself was already a feature character in cartoons as early as, say, Dizzy Red Riding Hood (1931 / full cartoon), but she only got her own headlining series of cartoons beginning in 1932 with Stopping the Show [full short].) But the fact of the matter is, Bimbo's Initiation is not only the far more consistently weird short of all that are mentioned in this blog entry, it is also the most sadistic and fucked-up and, in a bizarre way, also features the most Betties.
It is also an early attempt to brainwash the American youth and convert them all into devil-worshipping sodomites, if we are to believe the blog The Open Scroll, which points out — among other things — "Betty was a secret transvestite or a hermaphrodite, a sodomizer." The Vigilant Citizen, in turn, offers the more convincing argument that the short "is all about secret societies and the ordeals an initiate must go through to be accepted."
Encyclopedia Britannica rightfully calls Bimbo's Initiation "a prime example of the Fleischers' quirky perverseness," while the great Jim Woodring says, "[The film] is an ingenious piece of work, made by men who I now realize were well aware of its metaphysical content, as evidenced in part by the use of Offenbach's Orpheus in the Underworld in the soundtrack. Perhaps its creators were trying to amuse themselves by making a cartoon that combined madcap whimsy with philosophical depth. Or maybe they were just high." You needn't be high to enjoy the short, though...
Six minutes long, directed by Dave Fleischer, animated by Grim Natwick, produced by Max Fleischer, and with Mae Questel doing Betty' voice, Bimbo's Initiation is an early and totally surreal masterpiece of animation. Enjoy it! And keep your eyes open for the obligatory split-second appearance of Mickey Mouse.

The full story of Betty and her creation, by the way,  can be found here at Wikipedia; we here at A Wasted Life personally think that Helen Kane got shafted when she unjustly lost the case against the Fleischer studios, but not only is that another story, we also all know that justice is not blind when it comes to who has the cash.
The GIF of Bimbo running comes from Gif Movie.
Posted by Abraham at 9:44:00 AM