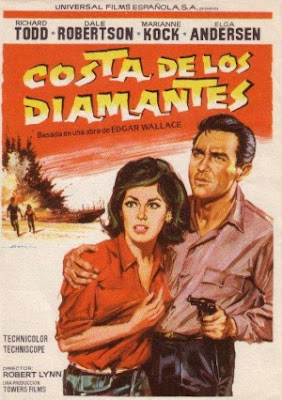 The third film based on Edgar Wallace's book Sanders of the Rivers, one of his earliest works of fiction, which was first published in 1911. Wallace based the hero of his stories on an actual man, a Belgium civil servant in the then Belgium Congo, who had acted as a sort of unofficial policeman for his government. Wallace met the man while in Africa working as a reporter for the Daily Mail and was so inspired by the civil servant's exploits that he wrote a number of books around the man, renaming him Sanders. The first film version, likewise entitled Sanders of the Rivers, was made by the legendary Zoltan Korda in 1935; Korda's version presents the character as truly heroic and a British exemplification of all that is good about Colonization. (The movie is even dedicated to "the handful of white men whose everyday work is an unsung saga of courage and efficiency.") Needless to say, Korda's Sanders of the Rivers has dated badly — though its location shooting still packs some punch. 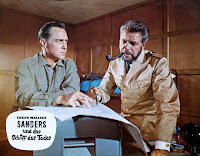 The two other movies based on the book that came later, this movie and Death Drums along the River (1963), pretty much jettison the entire concept of colonization and simply go for adventure. Actually, Death Drums along the River (1963) and Coast of Skeletons work almost as a two-instalment series since they both feature the same person, well-known character actor Richard Todd (of House of the Long Shadows [1983 / trailer] and Stage Fright [1950 / trailer]), playing the title character. Furthermore, both films also share a number of other actors, but unlike Todd these actors do not repeat the same roll and instead play completely new characters in each film. (Including Marianne Koch, who that same year played the part of Marisol, the lead female role opposite Clint Eastwood's Man-with-No-Name in the spaghetti western A Fistful of Dollars (1964); Koch left the industry by 1971 to become a medical internist.) 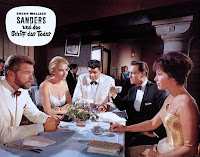 In Coast of Skeletons, Sanders (Todd) returns briefly to England from the "Republic of Gondra" after being unceremoniously fired by the newly independent land. Taking on a job at an insurance company, he is promptly assigned to accompany the Texan entrepreneur A.J. Magnus (Dale Robertson of Son of Sinbad [1955 / scene with Lily St Cyr dancing]) to West Africa, were the business man is attempting to excavate diamonds off the coast of the continent. Arriving in Africa, Sanders first survives a murder attempt only by chance, and then comes too late to save Piet van Houten (Dietmar Schönherr, who achieved cult immortality in Germany two years later as Cliff Allister Mclane of Raumschiff Orion [1966 / trailer]), the son of Magnus' previous (and dead) partner. 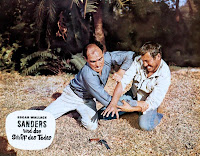 Piet had come to tell Sanders all that he knew about the prior boat of Magnus that sank off the coast (and cost the insurance firm Sanders works for a small fortune), only to have his neck broken by Magnus' right-hand man. The captain of Magnus' new ship, Johnny von Karston (Heinz Drache of Hypnosis [1962]), in an attempt to keep his superficial wife Elisabeth (Elga Andersen) by his side rather than by that of Magnus, uses the excavation as a chance to locate a fortune of gold that he knows sank in the area during the Second World War. Sanders discovers proof that Magnus' previous ship was sunk on purpose and Magnus finds out about the sunken treasure, so the latter locks everyone — including Helga (Marianne Koch), von Kaston's photographer sister and convenient love interest for Sander — in the ship's hold and opens all the hatches... 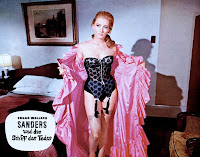 Do they all escape? Do they all trudge through the dessert to the now-landlocked shipwreck that holds the gold? (It seems that the water at the coast of Africa is steadily receding every year, so a ship sunk two miles off shore 20 years previously is now actually in the middle of the desert two miles inland). Are guns shot and do bad guys get double-crossed? Does a superficial girl seemingly simply disappear from one scene to the other? Does dynamite explode and all the good guys fly away? What do you think? 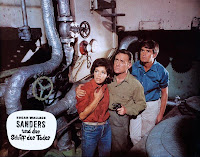 According to Florian Pauer in his book Die Edgar Wallace Filme, Coast of Skeletons is the first Wallace film treated to both color and widescreen. Keeping this in mind, it almost seems a bit odd that director Robert Lynn was chosen to helm the project, considering that he was primarily a TV director and his only feature film of note was Dr. Crippen (1964), a low budget B&W film based on the true story of the pathetic, murdering doctor, starring Donald Pleasence as Dr. Crippen and an unknown Samantha Eggar as the woman he kills for, Ethel le Neve. (Just how true the story is, actually, is now open to speculation seeing that DNA tests have cast doubts on Dr. Crippen's guilt.) Perhaps the producers were simply looking for an affordable director and took note less of Lynn's solo work than of some of the sumptuous color films he had previously worked on as a second unit director, such as the Hammer classics Horror of Dracula (1958 / trailer) and Revenge of Frankenstein (1958 / trailer). Needless to say, Coast of Skeletons is hardly as lush as those two Gothic horrors, but Lynn does a competent if unimpressive directorial job.

All in all, Coast of Skeletons is a slight film that feels more like an extra-long episode of one of those popular television series of the 60s that always took place in the outback of Australia or Africa, like Daktari. True, the plot is both more believable and much better constructed than the average episode of those adventure series of yesteryear, but the violence is comparably bloodless with the dead always lying limply with closed eyes and the punches thrown always obviously missing the face of the person who then goes flying backwards. Coast of Skeletons isn't bad for what it is, but anyone over the age of 13 will probably find it both juvenile and dated. 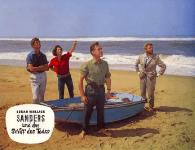 We couldn't find any trailer or outtakes online from Coast of Skeletons — or Sanders und das Schiff des Todes, as it was entitled in Germany — but there is a public domain version of Korda's offensively dated Sanders of the Rivers to be found online. It should be noted that the great Afro-American actor Paul Robeson was so disgusted by the final edit of Korda's film that at one point he supposedly tried to buy up all copies so as to ensure that the film could never be seen. He failed. 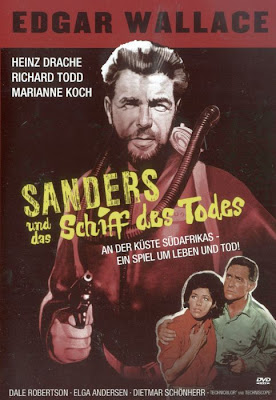