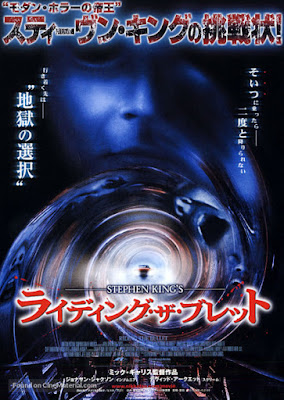 Some years ago, in 2009, we watched another of Mick Garris's Stephen King adaptations, the miscarriage entitled Sleepwalkers (1992 / trailer), and were moved to scream, among other things, "Director Mick Garris has since made a career out of making bad Stephan King television mini-series, including The Stand (1994 / trailer) and The Shining (1997 / trailer), which is a good reason to shoot him. Until that happens, however, one is advised to avoid this embarrassing piece of shit." 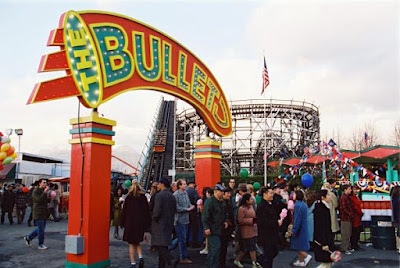 Nowadays, older, wiser, mellower, were we to write that review today it is doubtful that we would be so Gamergate evil in our screed against the director; and perhaps we would even now appreciate Sleepwalkers for what it truly is — a bad film — but we feel little desire to do the necessary re-watch of Sleepwalkers to find out if the latter is true. (So many other bad films out there to see, and so little time.) 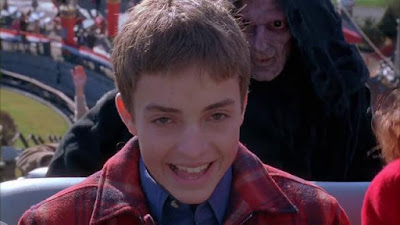 Riding the Bullet is of a slightly different caliber than Sleepwalker. In the end, it is also a failure, but at least it is an intriguing failure, and is much more a failure of note than simply a bad movie. But then, perhaps its source material — Stephan King's novella of the same name — is simply unfilmable.* In any event, if the novella is anything like the movie, then it is very much a message book — decipher it yourself: "Nothing seems to last. But the bullet. The bullet is constant. The bullet is always there. You wait in line, that's all. And when it's your turn to ride the bullet, maybe you ride, maybe you run. Either way it comes to the same thing. Fun is fun. And done is done. Nobody lives forever, but we all shine on."** 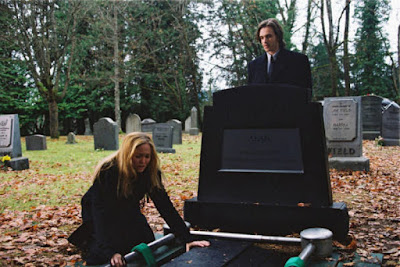 * We admit to never having read the book. We no longer read King novels. We admit trying to, again, last year, Rose Madder, but while we did make it through the book we decided we like badly made, crappy movies more than well-written, bad books. Life is too short for the latter. Fun is fun. And done is done.
** We admit to believing more in the direction of all we are is dust in the wind. 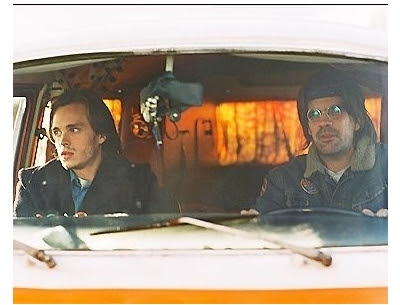 Riding the Bullet is a film one wants to like, but can't in the end. Well-shot and well-paced, its most interesting feature — the narrative flip-flopping between reality and the imagined — also causes it to fail. 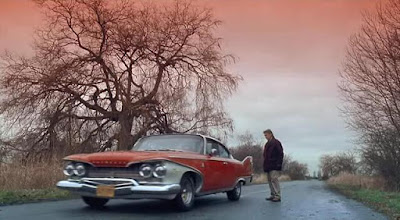 The credit sequence, while not the most interesting feature, is great: true, the idea of homemovies to provide needed past knowledge might not be new, but it generally works, as it does here, and supplies a wonderfully encapsulated presentation of the past that has made the main character who he is, while also revealing the personality of his mother (the always excellent Barbara Hershey). Also, elsewhere in the movie Mick Garris uses an occasional flourish of the camera that is surprisingly eye-catching and creative — our favorite being the traveling camera that flows over one open coffin and gravestone after the other before getting to the money shot. We also found the opening yawn hilarious: it truly catches just how dull nudity normally is in art school drawing classes. (Anyone recognize the teacher as the doomed, loving Dad in Zack Snyder's excellent remake, Dawn of the Dead [2004 / trailer]?) 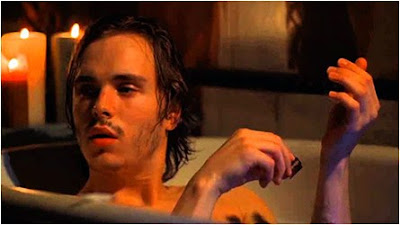 Set in 1969, the basic plot of Riding the Bullet revolves around a somewhat whiny art student with an extremely active fantasy named Alan Parker (an oddly unlikable Jonathan Jackson of Venom [2005 / trailer]) hitchhiking his way home on Halloween night to see his mother, who's in the hospital from a heart attack. The baggage he has on his shoulders, other than a small backpack, is that his girlfriend Jessica (of The Tortured [2010 / trailer]) has broken up with him and that he has a recent, failed suicide attempt behind him. (A great scene involving a visit from Death, whose look is modeled after The Seventh Seal [1957 / trailer] but with acne, and some extra goading by female wall murals. The latter could be probably be interpreted on a Freudian level, considering Alan's attitude towards the women in his life.) 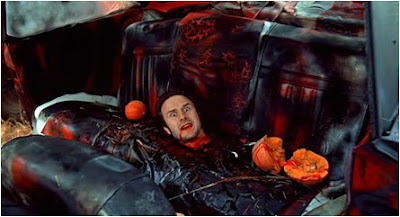 It is Alan's active imagination that drives most of the movie. Initially introduced in a quick scene in which Alan berates Alan, Alan's visions soon become extremely corporal and long. Usually one can quickly catch on that a transpiring scene is a fantasy, but sometimes the fantasy segues into reality while, elsewhere, the viewer doesn't know what is real and what is imagined until well after the given scene has transpired. This, combined with the various (we assume) real "adventures" he has along the way — a ride with an incontinent and half-demented farmer (Cliff Robertson of The 13th Child [2002 / trailer] and Dominique [1979 / trailer]), a car accident in a VW bus driven by a pseudo-hippy, a possibly rabid dog, other people's car accidents, and kill-happy rednecks among other things — results in a disquieting road trip of hellish proportions. 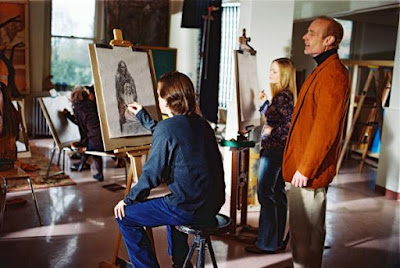 And therein lies the problem with the movie. By the time Alan hooks up the ghost-driver George Straub (David Arquette of Wes Craven's Scream [1996 / trailer] + ad nauseam, Bone Tomahawk (2015 / trailer), Eight-Legged Freaks (2002 / trailer), Ravenous (1999 / trailer), Grey Night / Ghost Brigade (1993 / trailer) and President Evil [2006 / trailer]), he has experienced so much horror that his whole ride with George, including the titular riding-The-Bullet interlude, is rather anticlimactic and ineffective. The jokey film-in-a-film explanation of George's death is actually far more suspenseful and blackly funny than any of the interaction between George and Alan. 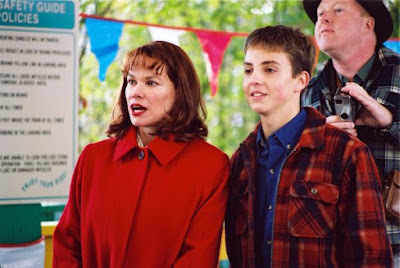 Likewise, the subsequent stuff at the hospital after Alan has made his unlucky choice, has its stabs of effective black humor (again due to Alan's active imagination), but is neither very scary nor particularly heart-rendering. Worse, the whole epilogue bit in which Alan goes on to become a Mamma's Boy times ten, is as gag-worthy as it is unrealistic. (Like, why would Ghostly George, an obvious asshole, suddenly be a nice guy and give the two a few more years together?) By its structure — it is used to hammer the movie's core theme over the viewer's head — the epilogue sequence seems probably to have been taken from the source novel, for it strongly echoes Stephan King's inability to know when to end his tale. 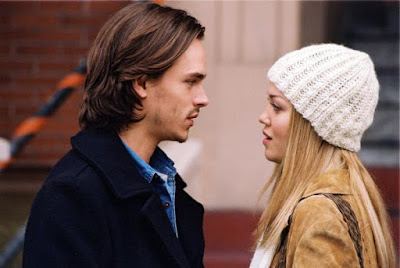 So there you have it. The first two-thirds of Riding the Bullet maintains a certain level of unease and originality due to its intermingling of fantasy and reality and occasional visual flare, but in the minute the movie reaches its titular highlight it quickly loses its steam and peters out into toothlessness. 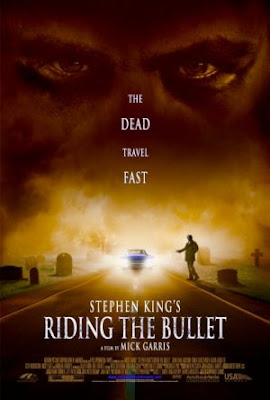