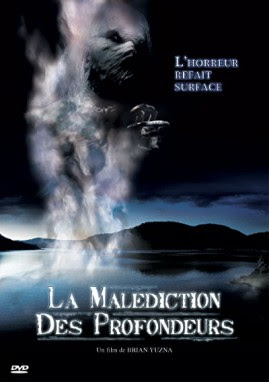 Beneath Still Waters is an emphatically serious Spanish-lensed horror movie based on a 1989 novel of the same name by Matthew Costello. The tale is clearly Lovecraftian when reduced to it intrinsic plotline — an unseen evil lowers unseen, biding its time (40 years, actually) to escape and wreak havoc — and possibly even includes aspects that might have made a good movie. But a good movie this is not. 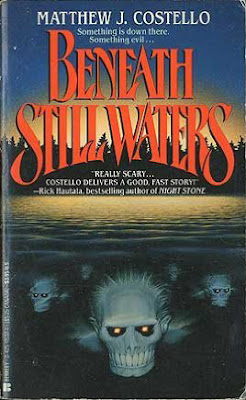 True, there are worse films out there, but there are also many better ones, more memorable ones, more interesting ones. This one here, on the whole, is simply another disappointment from the film's director, Brian Yuzna, who long ago burst onto the horror movie scene with the highly entertaining, flawed and once overly-praised but now unjustly forgotten slice of 80s horror entitled Society (1989 / trailer). Yuzna quickly became (along with Stuart Gordon, with whom he regularly collaborates) one of the great white hopes of contemporary horror, and since his second directorial effort, the bloody but funny sequel Bride of the Re-Animator (1990 / trailer), his activities (as producer, writer and/or director) in the independent horror scene have been extremely regular but uneven. Nevertheless, he remains a name to be respected ... or at least we like to think that, even though we do slowly have our doubts that he'll ever direct another good film that doesn't have "Re-animator" in its title. 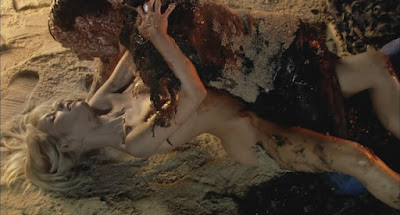 Regrettably, Beneath Still Waters, despite some notable shock scenes, a few rare moments of suspense, and some other mildly entertaining aspects, is definitely one of Yuzna's minor works and is also decisively uninteresting. In fact, three days after having watched it, were it not for the notes we took while screening the DVD, we wouldn't be able to remember anything about the movie — other than the fact that some of the special effects (particularly the underwater scenes) are decidedly dodgy, and that Susana (Pilar Soto) reveals, in her mildly memorable nighttime nude scene in which she gets porked and eaten by a half-rotten waterlogged zombie, that her implants are of the unrealistically immobile type. (Really, though: even if you were miserably sad about how your unsung love drowned in a lake, would you stand around when his rotting, partially dismembered body rises out of the water and, instead of running away, let him mount you for a midnight fuck?) 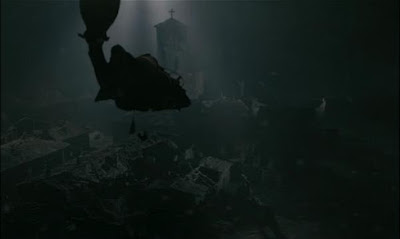 The movie opens, like the book, with two young boys going to explore and play in the fenced-off town of Marienbad, which is due to be flooded by the rising waters of the  new damn. But they stumble upon an unexpected cellar full of chained-up people, and soon one person, Mordecai (Patrick Gordon), is freed and one boy is dead — and the movie jumps forward to the present day. The evil freed that day seems to have slumbered all those decades deep beneath the sea, or somewhere, and now, on the eve of the local celebration of the creation of the man-made lake and resulting tourist industry, is suddenly getting ornery. 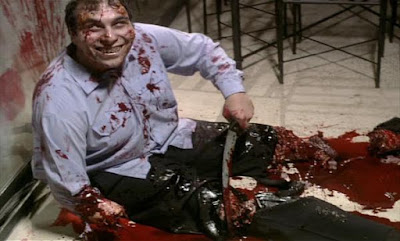 Why the evil waited so long to get active is never really made clear, but then, there are many aspects of the tale that don't really hold water when looked at. For example, the book that our scuba-diving hero Dan Quarry (Michael McKell of Outpost 3: Rise of the Spetsnaz [2013 / trailer]) and O [2014 / trailer]) decides to throw into the fire to destroy the evil: one can only wonder how he came to know that was the magic solution, and why it wasn't done 40 years earlier by those who originally set out to destroy the evil. (Indeed, they still could have sunk the village, but with the knowledge that the evil was really dead and not just sunken.) And even if the new village possessed having a wild orgy was fun to watch, why were the main characters not likewise possessed? Why is the evil so selective in who it kills along the way — a drunkard, a boyfriend, one diver, but not the others? Seriously: the black demon-gunk in the water is killing people left and right, but when it envelopes scuba-diving Dan he survives unscathed and later only comments about some strong water currents? These are but a few of many "Huh?" questions that arise and never get answered as the meandering tale full disparate and badly integrated horror interludes slowly unfolds to nowhere interesting. 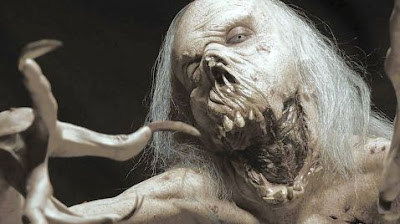 If you get down to it, the best thing about the movie are the babes, none of whom will ever win any acting awards. OK, tertiary character Susana with the immobile boobs is only interesting in that her naked death is grotty but laughable, but main gal-in-danger Clara Borgia (Charlotte Salt of The Hoarder [2015 / trailer]) is a hot tamale, and her mom Teresa Borgia (Raquel Meroño of The Mark [2003 / trailer] and Dagon [2001 / trailer]) is a total MILF. But Beneath Still Waters isn't a soft-core sex film and neither babe gets naked much less has any sex scenes, and while eye candy is always appreciated it doesn't do all that much to make the dullness between the occasional gore interludes all that less boring. 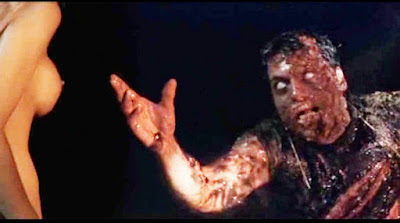 In the end, Beneath Still Waters is a forgettable and pointless movie that really could have been so much more. 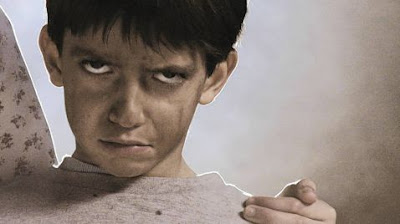