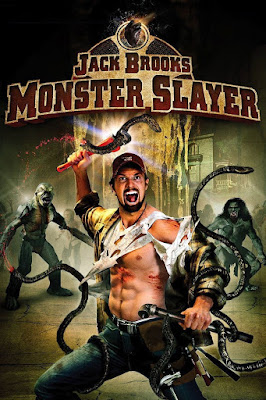 The feature-film directorial début of Canadian director Jon Knautz, the title of this horror comedy is of course an obvious homage to a far more successful movie (1992 / trailer) and series (1997-2003 / trailer) featuring everyone's favorite blonde-haired, ditzy vampire slayer(s). And much like that film, and less like the series, Jack Brooks, Monster Slayer is a mildly diverting piece of fluff that offers occasional entertainment but is far from being either a masterpiece or even imperative viewing. In this regard, perhaps the biggest flaw of the movie — if one ignores the truly embarrassing framing sequence that, while obviously meant as a joke, is far less funny than it is both subconsciously racist and an overt example of the white savior syndrome — is that the flick obviously had so much more potential, and thus comes across as underdeveloped. 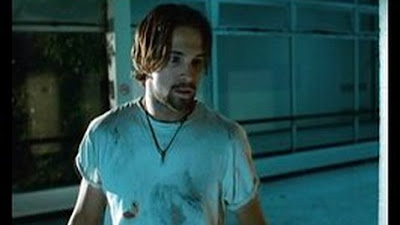 The basic plot involves the loser plumber Jack Brooks, who, as a result of being the only survivor when his family was slaughtered by a monster during a childhood camping trip, has some serious anger management problems. By the end of the movie, however, our plumber inadvertently finds a perfect outlet for his inner-anger as well as his purpose in life. And, of course, the film earns its title.

As played by the not unattractive Trevor Matthews, Brooks is more uptight and prone to uncontrolled rants or smoldering silence than he is, say, an entertaining and loquacious buffoon like Ash (see: Army of the Darkness [1992 / trailer]). Thus, though he occasionally does make a drily humorous statement, he is not truly entertaining or particularly likable. Indeed, if he is sympathetic at all, it is because most of those around him — his bitchy blonde girlfriend Eve (Rachel Skarsten of Fear of the Dark [2003 / German trailer]), an annoyingly touchy-feely stoner classmate John (James A. Woods) — are so obnoxiously dislikable. 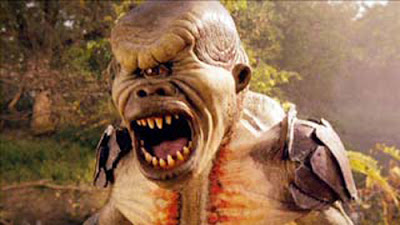 But for being such a dud of a personality, the movie spends way too much time on him before finally unleashing the monsters, the gore, the humor, the fun. So, while the movie does feature some amusing horror and monster slaying, particularly 55 minutes into the events, it delivers far less than one is led to expect by the film's title and the DVD's comic-book-like cover. And therein lies the rub that makes the movie so disappointing on the whole. 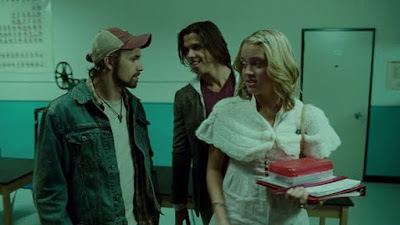 Giving credit where credit is due, the obviously low-budget movie uses no CGI, relying instead on good old make-up, rubber, and ketchup. The results are variable — the monster of the framing sequence looks like a rubber suit, as does the Jabba-the-Hut-looking demon Prof. Gordon Crowley (Robert Englund) mutates into — but cheesy effects do fit well into horror comedies, this one too. The limited number of mobile demons that Brooks ends up facing off in the high school, on the other hand, are a bit more "realistic" and owe their look more to the possessed of Demons (1985 / trailer) and Demons II (1986 / trailer) than rubber casting. 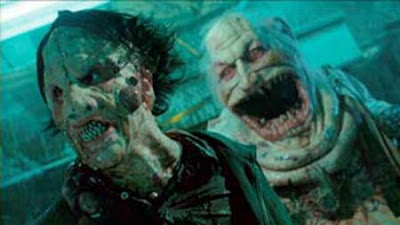 Whenever the demon shit hits the fan, director Knautz does a good job at keeping everything moving and bloody; indeed, his direction is better than his weak if tightly plotted script. (How tightly plotted? He even explains how the demon heart came to be buried in Prof. Gordon Crowley's back yard. And, actually, the revelation leads up to one of the best dialogue exchanges in the whole film.) And if the various characters are all relatively one-note in nature, the cast is obviously game and give their best across the board. Indeed, Jack Brooks, Monster Slayer comes across as such a labor of love one really ends up wishing that the movie was better than it is. But the simple fact is, it is slow to get moving, the real laughs (like most of the gore) start too late, and most laughs really aren't that deep. 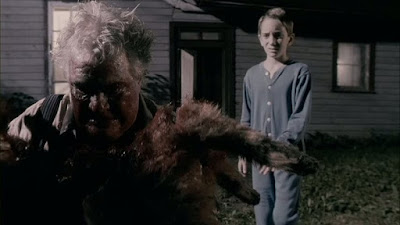 The true flaw with Jack Brooks, Monster Slayer is not that the movie is truly bad, it's just that there are funnier ones out there. We really expected a lot more than it gave, and were thus disappointed. Go in with low expectations, and you will probably actually find it relatively entertaining. We went in with high expectations and, well, sometimes found ourselves gazing into our beer bottle. 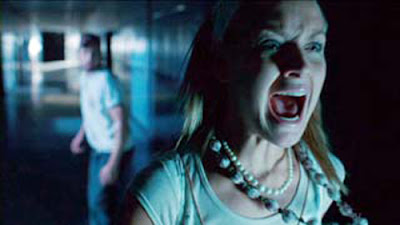 Director Jon Knautz has since gone out to direct a variety of serious (independent) horror feature films — Goddess of Love (2015 / trailer), Girl House (2014 / trailer) and The Shrine (2010 / trailer) — that haven't made waves, but all look interesting. 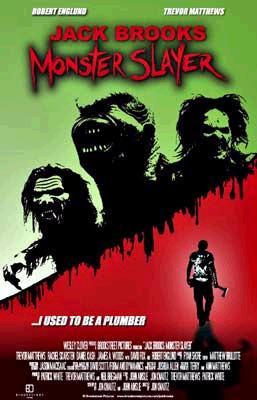 Used in the movie —
Bobby Darin's Beyond the Sea: