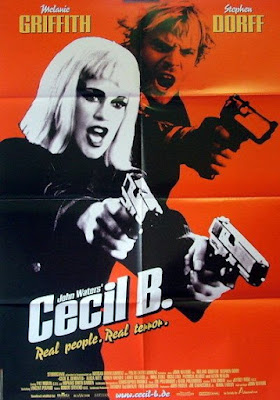 "Before I was a drug addict, I had so many different problems. Now I just have one — drugs! Gave my life a real focus."
Lyle (Adrian Grenier)
Trailer to
Cecil B. Demented:
We here at a wasted life don't know whom we feel sorrier for: John Waters or John Q. Public. John Waters deserves pity for the fact that his first three feature-length, Z-budget films — Pink Flamingos (1972), Female Trouble (1974 / trailer) and Desperate Living (1977 / trailer) — all masterpieces of transgressive humor, can never be equaled. And John Q. Public deserves pity that they have yet to realize that John Waters lite (basically, all his "mainstream" films between Polyester [1981 / trailer] and the somewhat boundary-pushing A Dirty Shame [2004 / trailer]), as sweet and almost mainstream as some of them are, still remain more idiosyncratic and personal and funny and genuine than most product of similar or larger budgets. But seeing that all his films since Hairspray (1988 / trailer), despite whatever cult status they may have now achieved or subsequent money they have earned on VHS/DVD, were losses at the box office (if not flops), the biggest loss for John Q. Public is that John Waters will probably never make another feature film again. (Please prove us wrong, John.)
"I'm not gay. I'm straight and I fucking hate it! Petey loves me and I can't love him back. I tried. I kiss him, and all I feel is whiskers. I can't take that certain thickness in his pants. I'm ashamed of my heterosexuality!"
Rodney (Jack Noseworthy) 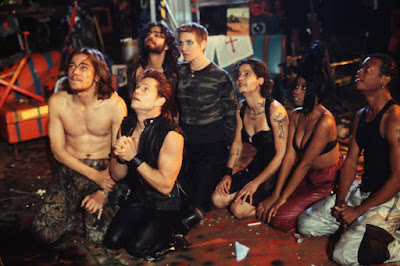 In a way, Cecil B. Demented could be seen as John Waters' love letter to his younger days as an underground filmmaker. True, he never kidnapped a movie star for his films — he didn't need to, first he had Divine (19 Oct 1945 – 1988), and then Liz Renay (14 Apr 1926 – 22 Jan 2007) — but up until Polyester, his films, which were very much a counterculture response to mainstream cinema, were all filmed at least in part on the sly on the streets of Baltimore. And as much as the City of Baltimore eventually came to love and embrace him, in his early years he was very much a rejected (if not hated) thorn in its side — a "pornographer", as his early municipal detractors were apt to call him. (OK, Pink Flamingos does have a blow-job scene, but the film really isn't any more pornographic than the substantially misfired Jane Campion thriller In the Cut [2003], which also shows in-mouth Oscar Meyer. It is more than ironic that Pink Flamingos, "one of the most vile, stupid and repulsive films ever made [Variety, 1972]", was selected in 2021 for preservation in the United States National Film Registry by the Library of Congress as being "culturally, historically, or aesthetically significant".)
"Technique is nothing more than failed style."
Cecil B. (Stephen Dorff) 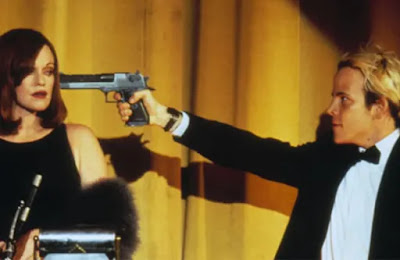 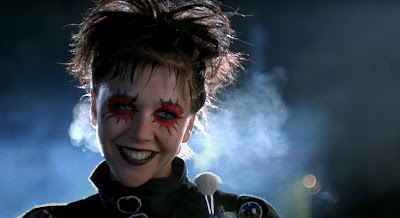 Perhaps the biggest surprise of Cecil B. Demented is that the kidnapping scene and subsequent escape, despite the obvious comic intention, are actually shot in a way that adds some tension and excitement. It all likelihood, were Waters ever given the rote job of directing a thriller or suspense movie, he would probably be more than up to snuff. Less surprising is the inspired dialogue that laces the entire film, a potpourri of imminently quotable bon-mots, swipes from past films, as well as obscure and not so obscure jokes delivered more or less as asides. (How many people are going to be able to catch the one about Honey winning an Oscar for her performance in Forced Entry even if they catch what is said amidst the scene?) 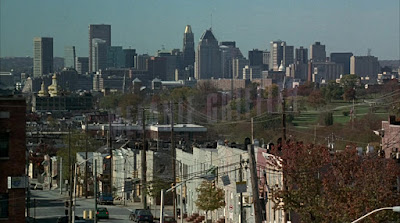 Of course, the movie never quiet pushes the boundaries as far as Waters's earlier films (or, for that matter, his last, A Dirty Shame), but he does once again prove himself of finding no topic too sacred (e.g., handicapped kids) to joke about or too disgusting to present almost sweetly (e.g., the film within a film involving gerbil sex). In that sense, one of the amazing things about the movie is that despite some of the topics it jokes about, it never actually shocks — barring an unexpected death or two.
"Family is just a dirty word for censorship."
Honey (Melanie Griffith) 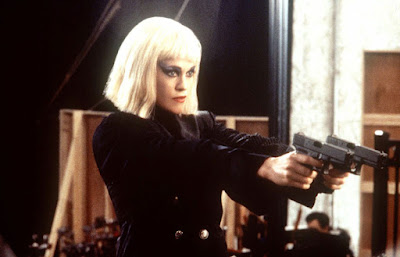 That films like Cecil B. Demented fail is a bit of a mystery. We screened this with a small group of six at our weekly bad-film night, where only two of us even knew who John Waters was or what his filmography includes. And the other four found the movie hilarious, openly agreeing that the movie was way too good to be shown at a bad-film night, that it was a movie one could watch with friends and family — and that despite jokes about zombie porno-film patrons or autographing sex toys, gerbils in the rear, kidnapping and terrorism, incestuous rape, Satanism and so forth.
"I'm Cecil B. Demented, and you're in my movie. Do not look into the lens and ruin the shot or you will be shot."
Cecil B.

Admittedly, Cecil B. Demented does seem a bit underdeveloped at times. Honey's Stockholm Syndrome hits pretty early and quick, considering how little coercion takes place, and it is hardly likely that she, a Hollywood insider, would be all that surprised at all the industry backstabbing in the aftermath of her kidnapping and first forced shoot. Nor, for that matter, does Cecil B. truly convince as a mesmerizing cult leader ala Jim Jones or Charlie. (But then, can that quality be caught on film? We have yet to see any visual recording of Jones or Mansion that does anything but make them seem like nutcases. But then, a Trump and co. prove, people like nutcases.) Likewise, the resolution at the drive-in seems a bit rushed, while the "Forrest Gump II" set-up with the teamsters doesn't seem to fully gel (despite some good lines).
"Dear Diary, another day, and it's the same old thing. Everywhere I go, everything I do just seems to lead to the same dead end: my derrière."
Cherish (Alicia Witt) 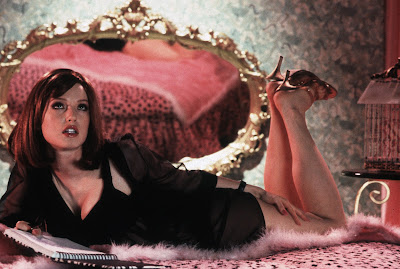 That said, Cecil B. Demented is a farce, a grotesque, a send-up, so by the very nature of the film there is no reason to expect or demand "believability". The question that counts in the end is whether the movie delivers what it is meant to deliver, laughs, and that it does so easily — despite the fact that so much of it, in theory, should speak to a specific audience (i.e., film fanatics). As a pleasant film that laughs at both unpleasant and innocuous things and that transcends its tight target group to be broadly funny, Cecil B. Demented deserves a much wider audience than it ever got. Give it a go — and watch it with friends.