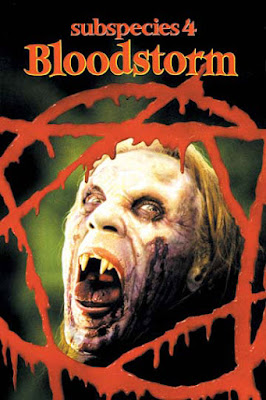 Subspecies IV: Bloodstorm — the film is the fourth and for a long time final film of Full Moon's Subspecies franchise, and tangentially related to the one-shot Subspecies spin-off, The Vampire Journals (1997 / trailer). And sitting as it does preceded by so much past — namely: Subspecies (1991 / trailer), Subspecies: Helldance (1993 / trailer) and Subspecies III: Bloodlust (1994 / trailer) — a pertinent question that arises is whether there is any point in watching the film if one is completely unfamiliar with the series and narratives that preceded this once-final franchise installment.* The answer to that, we are pleased to say, is yes: any and all knowledge of prior events that is really required is succinctly and well presented in the first five minutes, after which the movie strides resolutely and entertainingly forward to present its own story. And does so surprisingly well. 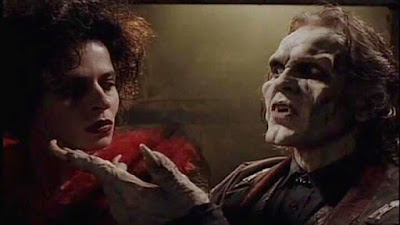 * We say "once final" because it would seem that currently, as in 2021/22, over two decades after Bloodstorm, a new installment is in production: Subspecies V: Blood Rise. This time around, the film is going to be a prequel. Thereafter, who knows — how about Subspecies VI: Blood in Space?
Trailer to
Subspecies IV: Bloodstorm:
In many ways, Full Moon films are like the Poverty Row films of yesteryear, only instead of being the second feature, they are direct to video/DVD. Populated with names that are usually far from big or even mildly familiar (unless the name is on the skids), the productions are a varied bag of terrible to fun time-wasters, with a rare, unexpectedly pleasant surprise sometimes amongst them. Logic and proportion are often sloppy or dead, the acting and direction variable. By way of example, you could compare a few of the second-feature Bela Lugosi films we've watched in the past: The Corpse Vanishes (1942), like BL vs the Brooklyn Gorilla (1952), is a pretty "terrible" film, but whereas the latter enjoyable merely as a Guilty Pleasure, the former displays a knowingly campy and surreal humor that reveals the filmmakers knew they were making crap and just had fun with it — to the advantage of the film. In turn, White Zombie (1932), for all its lowly roots and nano-budget, is an artistic achievement. It is a movie that seriously transcends its wrong-side-of-the-tracks roots and can stand proudly as a good movie. (How that ever happened is perhaps a mystery, seeing that all those involved never managed to rise that high again.) Full Moon projects are just as variable: terrible to absolutely great, you seldom know in advance which. 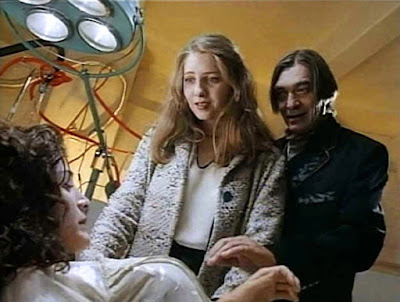 We can't speak for the earlier Subspecies entries, but when it comes to this one, Bloodstorm, the movie is less related to Brooklyn Gorilla than it is (if nevertheless extremely distantly) to White Zombie. The at-times somewhat disjointed story might have its lapses in logic, its cheap necessities, and its deus ex machinas, and the acting might be truly variable, but visually the direction is nothing to sneeze at: it is often a beautiful movie with pleasant (but in full color) references to the visual style of the silent horror classics. 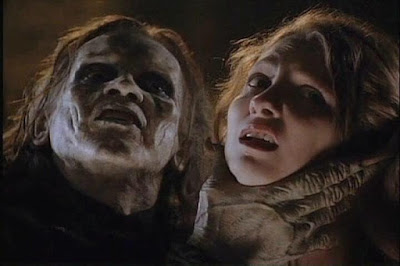 In that sense, director Ted Nicolaou, a low-budget director of prodigious output, reveals a visual talent and creativity sorely lacking in another, perhaps better-known, low-budget director of prodigious output, David DeCoteau. Lighting-wise, their films often look the same, but whereas DeCoteau seems to prefer a moribund camera and visual somnambulance, Nicolaou knows how to move or tilt the camera and keep the film visually appealing. This talent does a lot to give a movie some life, and make the flick a far more enjoyable cinematic experience; thus, though the narratives of the respective journeymen might be of equal feebleness, Nicolaou's movies are invariably better. 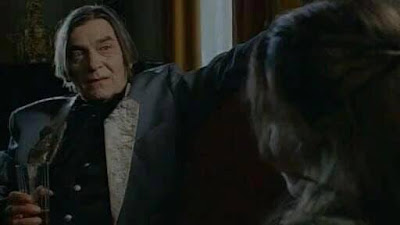 Dare we hypothesize that the filmic difference in the two directors' respective roots is apparent in the product of the two? DeCoteau learned the ropes doing no-budget porn, hardly the most visually creative genre (other than for rare exceptions like Thundercrack [1975 / scene / scene / scene] or Hardgore [1974]), while Nicolaue went from graduating from the University of Texas film program to recording sound for Tobe Hooper's original The Texas Chain Saw Massacre (1974) and then to editing idiosyncratic flicks like Tourist Trap (1979) and Butcher, Baker, Nightmare Maker (1983 / fan trailer, with Susan Tyrrell). Going by Bloodstorm, the man has some artistic intentions despite the lowly genres he works in and his definitely non-A employers. If DeCoteau has already long become today's William "One-shot" Beaudine (15 Jan 1970 – 18 Mar 1970), Nicolaue may be, maybe, on his way to becoming today's unsung Edgar Ulmer (17 Sep 1904 – 30 Sep 1972). 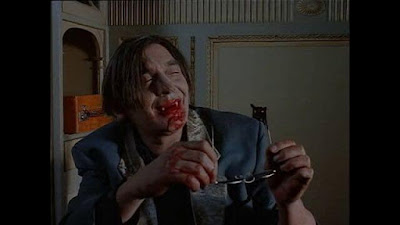 The titular "subspecies" of the other Subspecies films — monstrous minions to the undead — are missing from this entry, which is very much a contemporary, gothic-tinged vampire tale. Nosferatu's first cousin Radu Vladislas (Anders Hove), always killed at the end of each Subspecies film only to be resurrected in the next, is back again (thanks to a believably possible stroke of luck) and still obsessed with getting the beautiful Michelle Morgan (Denice Duff) to fully reject her humanity and accept her role as his vampire mate — something she comes very close to doing. 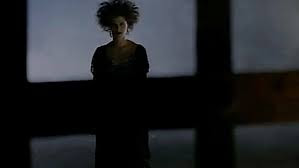 The two are basically the only characters (other than a pathetic and rather unnecessary policeman, Lt. Marin [Ion Haiduc of Last Gasp (1995 / trailer)], whose presence is more to fill running time than to advance the story) to return from the Subspecies franchise: since the actors Kevin Spirtas (of Albino Farm [2009 / trailer], Embrace the Darkness [1999 / some song in a foreign language] and Wes Craven's disgraceful The Hills Have Eyes II [1984]) and Melanie Shatner (of The Alien Within [1995 / trailer], Syngenor [1990 / German trailer] and Juan Piquer Simón's Cthulhu Mansion [1992 / trailer]) were unable to return to play Mel and Rebecca from Subspecies II and III, they are summarily killed off at the start of the Bloodstorm by means of a prudently edited (no faces shown) and auspiciously timed car accident. In a further case of fortuity as only occurs in movies, a passing doctor, Ana Lazar (Ioana Abur of The Crucifixion [2017 / trailer]), arrives on the scene and, thinking that Michelle is still alive, carts her off to the private clinic where she works. There, her former lover and current boss, Dr Niculescu (an over-acting and almost camp Mihai Dinvale of Shapeshifter [1999 / trailer] and Dark Angel: The Ascent [1994 / trailer]) recognizes a vampire when he sees one and is convinced he can cure her. Oh, as is pretty quickly obvious: he, too, is a vampire, though obviously not under the thrall of any master, and is hot to get hold of the legendary Bloodstone, the ancient relic that gives the master vampire Radu his power.... 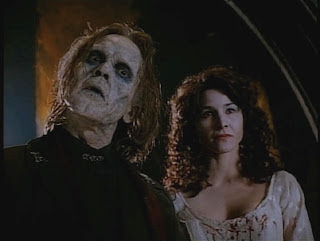 The Romanian locations are always attractive and fitting for the tale. As Dr Niculescu, Mihai Dinvale's acting takes a bit of time to get used to, as he is really the only cast member going for high camp and his style does clash a bit with the more naturalistic or non-style of the rest of the cast. The film plays well with his intentions and hidden agenda, and one is seldom sure of his loyalties, which adds a bit of depth to his overly arch character. Anders Hove is properly repulsive as the deeply evil Radu Vladislas, and while Denice Duff is arguably more an attractive than good actor, she does a half-way decent job in portraying Michelle's emotional indecisiveness and flipping and flopping between giving in to and fighting her rising evilness. It was a cute touch on part of Nicolaou to contrive to get her dressed in what is basically a flowing white nightgown, as it works both as a symbol of what Michelle would like to stay ("good") and as homage to the Gothic films of yore. It also functions as an intensification of the movie's own Gothic atmosphere. The two vampires written in from The Vampire Journals, Ash (Jonathon Morris of Screamtime [1983 / trailer]) and Serena (Floriela Grappini), fit better into the narrative than one might expect, though Serena definitely suffers from some bad 1990s fashion concepts. 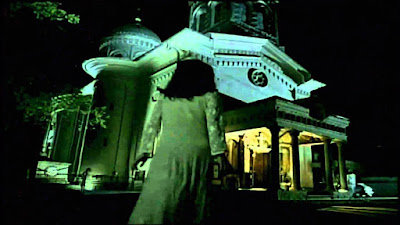 So there you have it: Bloodstorm is a surprisingly well-made and watchable low-budget vampire film of unexpected stylistic panache, the last of which helps greatly to smooth over the narrative and thespian weaknesses. We, in any event — and thanks only to this movie — are now definitely not averse to watching the earlier films of the franchise.
Posted by Abraham at 1:07:00 PM