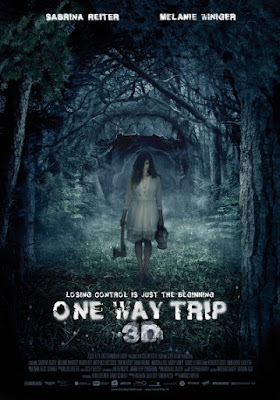 Spoilers. Hmmm, don't think we've ever caught a Swiss horror movie before this one. We wish we could say it was an experience of note, but, nope: One Way Ticket is nothing to write home about. It isn't even decent Swiss Cheese. 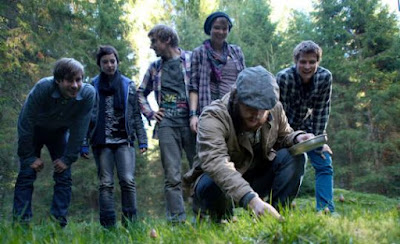 Indeed, it left us asking ourselves a rhetorical question: Would someone who has never had sex see themself as capable of directing a sex film? Because it sure seems that more than enough people out there who have obviously never taken this or that drug sure don't have any qualms about making films involving drugs. (Reefer Madness [1936 / full film], anyone?) This movie is a good example: it is more than obvious that none of the three forces behind the narrative (scriptwriters Matthias Bauer and Bastian Zach, and director Markus Welter) have ever taken mushrooms before. Nevertheless, their obvious lack of any knowledge about the subject didn't stop them from making this totally non-imperative, brainless, and by-the-numbers bodycounter, the only saving grace of which is not that it was released in 3-D, but that it has Miss Switzerland 1996, Melanie "Yummy-Yummy" Winiger, playing the hot, facially scarred red-herring Marlene. 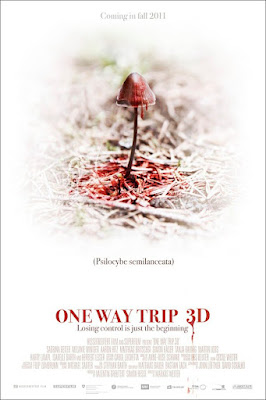 German-language Trailer to
One Way Trip:
The movie opens in Zurich, where five friends meet to drive off for a weekend outing. In less time that it takes for the viewer to catch all the names of the characters, two things become obvious, one: the five are the typically unrealistic friends of bad horror films, the kind that in real life you wouldn't spend any time with other than to whack across the face while screaming "Die! Die!" — and two: Valerie (Sabrina Reiter) is going to be the Final Girl. And she is. And that is how obvious the generic horror aspects of this movie are. It's where the film tries to be clever, tries to use its anti-mushroom sentiments as the foundation of the big twist, that it falls apart and reveals itself to be a car wreck of a movie: it holds water like a shit-stained, wet piece of toilet paper. And is only marginally more interesting. 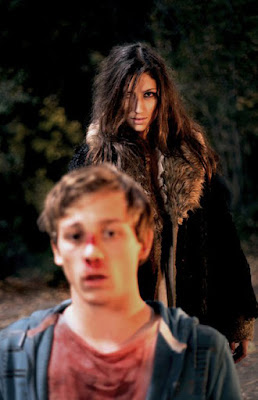 You ever see the equally stupid anti-mushroom movie Shrooms (2007)? We did, so you don't have to... but One Way Trip's scriptwriters Matthias Bauer and Bastian Zach obviously saw the movie and liked it, because they basically crib the idea but transplant the action from an Irish forest to a Swiss forest, and instead of special kind of shroom being bad (in Shrooms: the "Death Head" shroom), they make all magic mushrooms bad. (And really magic, too, as everyone basically is suffering the same bad trip. An impossibility, needless to say.) 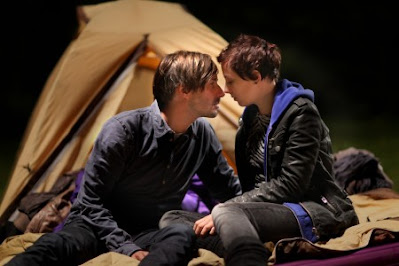 Oh, yeah: Bauer and Zach also obviously saw some stupid killer-hicks film — Wrong Turn (2003 / trailer), maybe? Deliverance (1972 / trailer)? It doesn't really matter; whatever film it was, it is surely a better one than One Way Trip — and decided to try to combine the two. Well, as Robert Burns was wont to say, "The best laid schemes o' mice an' men, Gang aft a-gley."*
* Speaking of Burns, actually, one good thing about the film is that although it is set in Switzerland and all the characters are supposedly Swiss, they all inexplicably speak dialect-free standard German — even the Swiss hicks. So if you speak German, it's easy enough to follow. 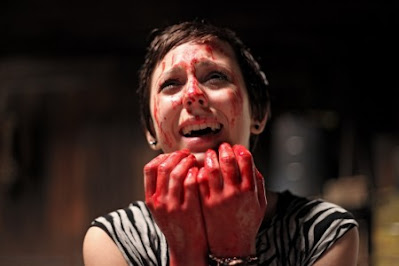 But back to the five friends. Obviously five over-aged young folks are not enough future dead, so contrivances of the most idiotic nature result in Valerie's ex-boyfriend joining the fray, and suddenly two strangers, clingy Lilli (Tanja Raunig) and sleazy Lars (Matthias Britschgi), join the troop. With eight, Bauer & Zach obviously thought they had enough fodder, for it is at this point that the movie tries (and ultimately fails) to go bodycount horror movie. 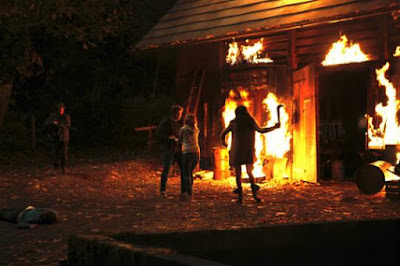 What happens? Well, the group all hunt, find, and take mushrooms and then while they all trip happily away, Timo (Harry Lampl of Initiation [2009 / scene]) suddenly gets injured, a thunder storm rolls in — seriously?!? — and they suddenly appear totally sober and head off in search of the car. They find a deserted manor house with courtyard buildings instead — and thus the bodies start to fall. Including one person who, before he's killed, is tied up and has his mouth stuffed and face covered with silk stockings (that all other fodder also later see): an impossibility because after the big twist, the viewer can't help but realize that the real killer was never wearing silk stockings. 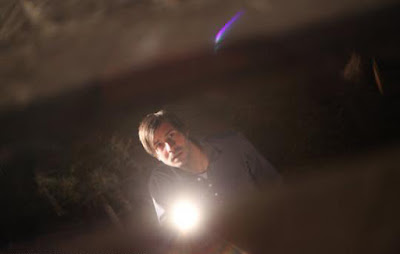 Okay, the film sucks, so we'll reveal the film's twist: They are all still tripping on shrooms (a drug that usually makes you happy and peaceful) and, under the influence of one major shared bad trip, are actually killing each other. 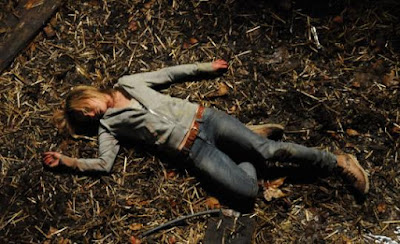 What bullshit. Like the whole film. When a film about drugs so obviously shrieks that it knows nothing about the drug, it fails to become anything other than a didactic tract. You know the great "educational film" maker Sid Davis (1 April 1916 – 16 Oct 2006)? (If not, see our Short Film of the Month for Sept 2017, Seduction of the Innocent [1961], and Sept 2013, Boys Beware [1961].) One Way Trip film tastes/feels as if Sid had suddenly decided to make one of his "informative" anti-drug movies in the form of a feature-length, German-language horror movie, and the movie is about as intelligent as one of his filmic tirades — unluckily, it is also a lot less funny. 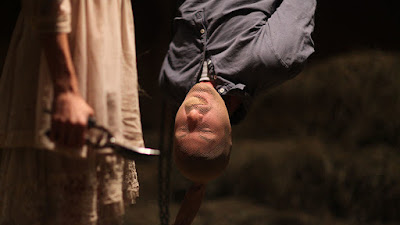 To sing praise where praise is undeserved because the film as a whole sucks so majorly, there are a few nice shots and moments in the movie. A death taken from the opening scene of that great Mario Bava movie Kill, Baby... Kill (1966 / trailer) is nicely staged; Lars is a convincing asshole and the hallucination of his big head is pretty funny; the extended shot following Valerie as she's being lifted out of the pit by a rescue crane is nice; the nonchalantly careless way the fat guy keeps pointing the found shotgun this and that way is unnerving; the 3-D isn't the worst 3-D out there; the mysterious way the entire interior of one room changes between the glances two different characters give into it is properly surprising; the scenery is great (indeed, we think we will make plans to visit the Canton of Jura); and... and... and... Well, that's it. 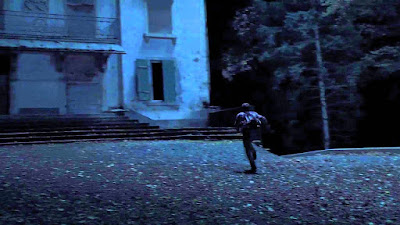 One of the characters says, more than once, "Wie im Lehrbuch," or "Like in a textbook." And that is what the horror aspects of One Way Trip feel like: taken from a textbook of how to make a dry and unoriginal horror movie, the filmmakers check off the boxes to "required scenes" one by one. (The step/box they overlooked was one says, "Try to be original.) One character even says "We should split up" at one point, and it doesn't come across as an in-film joke. 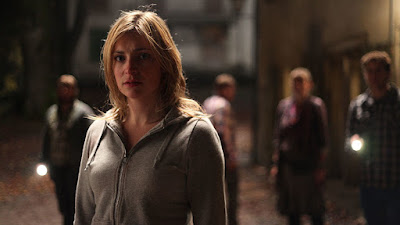 There is really nothing about One Way Trip that makes it worth watching. It is simply too unoriginal, unintelligent, unfunny, unscary, and uninteresting that the few plus points can in any way save it. It is a film that screams to be hated, and we here at a wasted life hated it. You will, too. 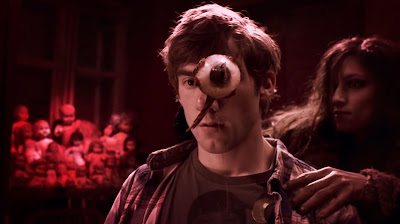 And as a last, very petty criticism: Why the fuck "One Way Trip" and not the grammatically correct "One-way Trip"? (Oh, yeah: because the people who made this flick are lazy idiots.) 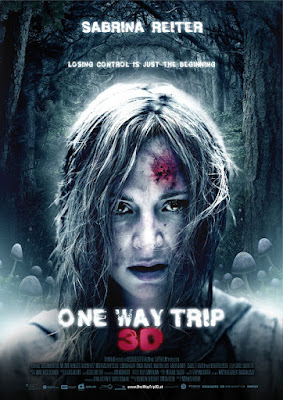