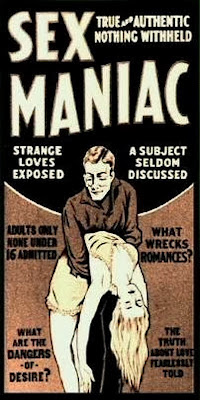 "The rats eat the cats, the cats eat the rats, and I get the skin."
The cat-farming neighbor 'Goof', whose real identity is unknown today. 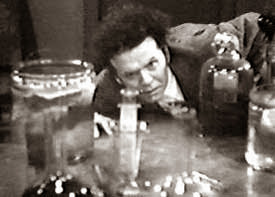 Aka Sex Maniac, under any title it remains another noteworthy what-the-fuck production from the great cinematic shyster Dwain Esper (7 Oct 1892 — 18 Oct 1982), one of the great non-talents of the early years of English-language exploitation cinema who for years carved a successful living as a fly-by-night, drive-by-night traveling filmmaker and roadshow film presenter. 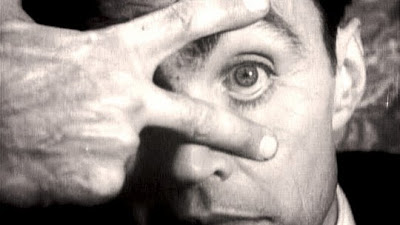 Like the great Kroger Babb, Esper helped shape early American exploitation films, which in those early years tended to be independent productions tackling topics that Hollywood avoided (drugs, venereal disease, pregnancy, bestiality, etc.) by presenting them in the supposed form of documentary or educational films. But whereas the magnum opus of Esper's later compatriot in exploitation Kroger Babb, the 1945 "sex hygiene" flick Mom and Dad (1945), which once shocked millions with its inserted real-life footage of an actual birth, entered the hallowed halls of the US National Film Registry in 2005 as a "culturally, historically, or aesthetically significant" film, Esper's equally exploitive if far more primitively made movies seem doomed to eternal disrespect, the public domain and — as in the case of his short How To Take A Bath (1937) or feature-length The Seventh Commandment (1932) — loss. But though his movies may be the dregs of filmdom, the Esper productions that still survive — Narcotic (1933 / full film), Sex Madness (1938 / trailer / full film) and Maniac being the most famous titles that he actually directed — also reveal themselves as extremely entertaining jaw-droppers. It's really no wonder that they all now enjoy varying levels of cult popularity. 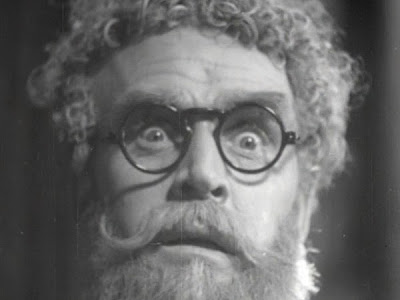 But assuming that you know nothing of Dwain Esper and his career in exploitation, instead of clarifying the facts we would suggest you just watch the following entertaining and informative fan-made documentary...


Like most of Esper's movies, Maniac was written by the love-of-his-life, his wife Hildegarde Stadie (14 July 1895 — 21 July 1993), who, having been both raised and an active participant in the intenerate life of patent medicine peddling, seems to have shared her husband's cinematic bent for the prurient. For Maniac, which is ostensibly a filmic treatise explaining a variety of mental illnesses, she borrowed aspects from Shelley's Frankenstein and Poe's The Black Cat and The Murders of Rue Morgue to regurgitate a wildly over-the-top and ridiculous horror filmscript that her loving husband filmed with equal inanity and a similar total disregard for either good taste or verisimilitude. 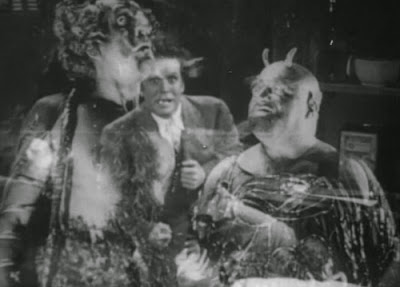 A restored version of Maniac was released in 1999, and we would recommend watching that version, although we ourselves chose the Internet Archives and the attendant displeasure of watching the public domain version of Maniac, which is in deplorable condition. Thus, much of the almost Godardian dialogue found in Maniac was close to impossible to hear or only sank in slowly or after a quick rewind. That which we did understand, we must say, was often outstanding in its non-sequential humor and parodist excess. The Espers may have sold their movies as serious treatises, but the obvious irony in which they present the sleazy excesses found throughout the movie reveals a fascination with the forbidden and socially abnormal that has nothing to do with factual reportage but everything with an attraction to the sordid and socially unacceptable. Maniac may be old and technically creaky, but it is an exploitation film just like we like them: socially irredeemable and transgressive — and hilariously entertaining to boot. In all respects, it easily equals or outdoes many an exploitation film from the more recent past... and not just in its technical or thespian ineptitude. 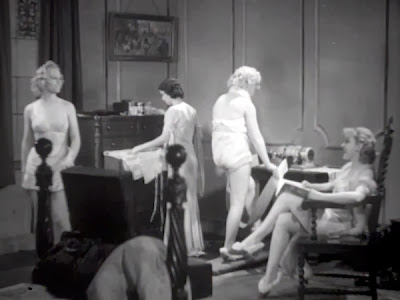 The movie supposedly concerns the mental unraveling of a former vaudevillian impersonator named Don Maxwell (played by Bill Woods, in his only known acting job, who went on to become a makeup artist*), but in the end Maniac is a simply a super-cheap, straight horror film heavy on sleaze and filler.

* Though William "Bill" Woods mostly did make-up for TV series, occasionally he worked on films such as the unjustly unknown horror flick, Back from the Dead (1957):

And what filler it is! Aside from the mandatory and lengthy scene of cheap gals lounging around in their skimpies in their shared flat, which allows for a lot of skin and shaking cellulite, there is one entire scene with a man named Goof (played by an unknown actor) that was probably less fictional filler than fortuitous reality that the Epsteins simply worked into their movie: though he plays an instrumental part in the movie's climax, one can't help but feel that his movie career as a cat and rat skin harvester was probably his real-life career as well, and that the sheer distastefulness of his source of income got him his part in the movie — especially since it corresponded so well to plot aspects taken from Poe's The Black Cat. 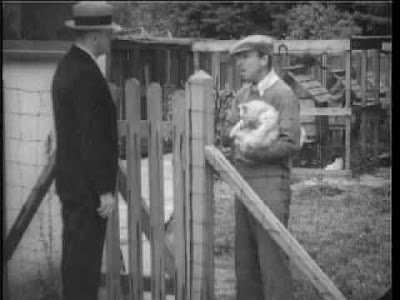 But let's get to the plot of the movie: Maxwell, on the lamb from the police, has taken refuge with the respected scientist Dr. Meirschultz (the forgotten but once extremely busy and usually uncredited actor Horace B. Carpenter of the first known [and now lost] haunted house movie, The Ghost Breaker [1914], Condemned to Live [1935 / full movie], and hundreds of other films). Meirschultz is a regular Dr Frankenstein, obsessed with bringing back the dead, which he actually does at one point when he and Maxwell gain illegal entry to the local morgue and revive a suicide (actress unknown). But as brilliant as the Doc might be, he also ain't all there: in need of another corpse to experiment on, the Doc gives Maxwell a gun with which to shoot himself so that the Doc can experiment some more... but Maxwell aims the pistol elsewhere and then, thanks to his make-up and impersonation skills, takes the Doc's place. 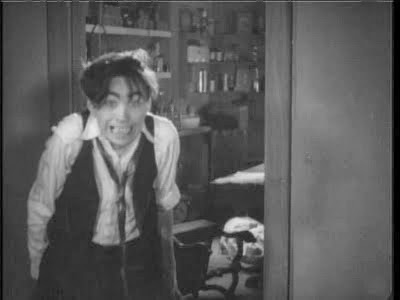 The plot, of course, is pure hokum and, like 99% of the film's dialogue, often lacks any semblance of logic or conceivable continuity. But for that, Maniac plays out like a live action hypnagogic nightmare interlaced with dialogue that is often better suited for a television sitcom. Highpoints include a man (Ted Edwards of Polygamy [1936]) going total ham when given a needle full of the wrong stuff and turning into a ape-like sexual predator (he promptly carries away, strips, molests and kills the revived suicide [now played a different actress]), a wonderful catfight between two women brandishing hypodermic needles in which one woman gets her head smashed in with a big rock but gets up to walk away, and the infamous  cat-eye-eating scene, done in a single shot, which is almost as stomach-turning than Divine's famous shit-eating scene in Pink Flamingoes (1972 / trailer). 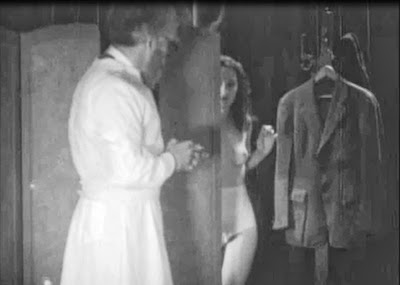 Needless to say, despite being a pretty funny film at times, Maniac, even after over eighty years since its initial release, still delivers some real shocks between all its laughable aspects. 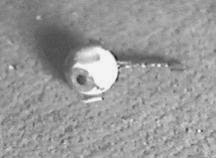 Without doubt, Maniac is a one of a kind cinematic experience that should appeal to fans of trash, exploitation and film history.** We here at A Wasted Life give this early classic of exploitation a hearty and heart-felt recommendation!


** Fans of old film might recognize some of the footage superimposed whenever Esper wanted to show the devils of insanity taking over Maxwell's mind. We caught shots taken from Benjamin Christensen's silent classic Häxan: Witchcraft Through the Ages (1922 / full film), but we didn't catch some of the other films supposedly also used, namely: Fritz Lang's Siegfried (1923), which we have seen in full already, and Maciste in Hell (1925 / full film), which we haven't seen (yet). 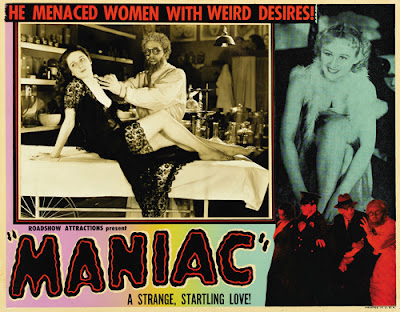