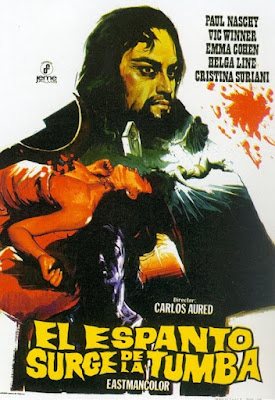 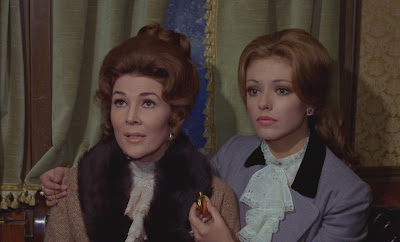 This film was on regular rotation on almost every regional Creature Feature show in the 70s and 80s, which probably had a lot to do with the movie becoming such a cult favorite. (Indeed, we caught it as a kid late night in DC on Count Gore de Vol's show on WDCA, where the non-American beauty and glamour of the two lead females amazed us as much as the rest of the film thrilled us.) Creature Feature broadcasts might long be a thing of the past, but Horror Express is in the Public Domain in the US, which means that with the advent of DVDs there wasn't a cheap DVD firm that didn't release their own version and, nowadays, it can easily be found online for free. 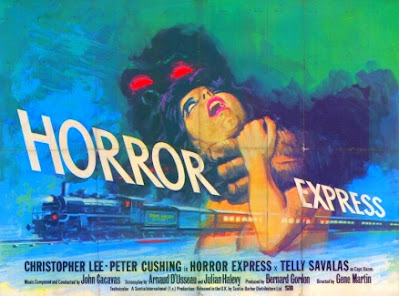 Trailers from Hell on
Horror Express:
There is, of course, another reason for Horror Express's exalted cult status: it is a damn good train ride! Tense and well-made, it can still scare the bejeebies out of the younger set, while those who no longer pee in their pants at the scary bits will nevertheless find the slightly uneven journey an engrossing and suspenseful one, if lightly spiced with a touch of cheese and some truly fake science (the latter at a Kellyanne Conway scale of "alternative science"). 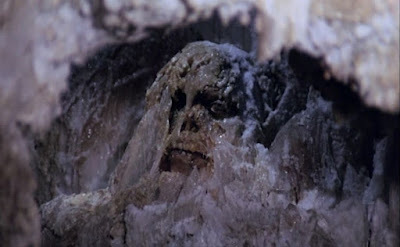 Of its type of movie — that is: period-set (1906) Euro-horror — we here at a wasted life would put Horror Express on our list of Must-Sees. It is in all likelihood the masterpiece of Spanish director Eugenio Martín, whose diverse portfolio of entertaining past directorial projects include Hypnosis (1962), The Ugly Ones (1966 / German trailer), Requiem for a Gringo (1968 / trailer), Bad Man's River (1971 / trailer), Pancho Villa* (1972, full film with Anne Francis), It Happened at Nightmare Inn (1973 / trailer) and more. 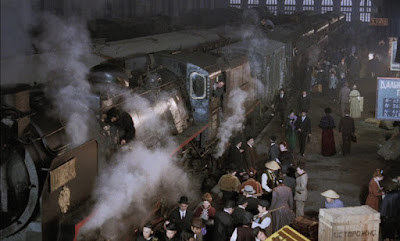 * Pancho Villa, Martín's project just prior to Horror Express, is not only the reason Telly Savalas is in this film, but is also the reason that this film ever even was made. The train and station sets were left over from Pancho Villa, so producers Bernard Gordon & Philip Jordon (see: Night Train to Terror [1985]), thinking like good, professional low-budget filmmakers, decided to get a second film from the set and came up with this movie. 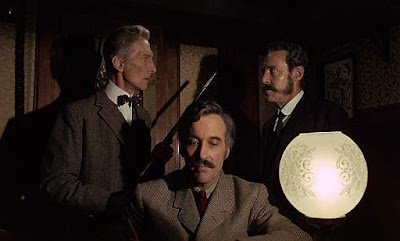 While not officially a version of racist nutcase John W. Campbell Jr.'s (8 June 1910 – 11 July 1971) novella Who Goes There?, genre film fans will not find it too difficult to see similarities between Horror Express and the official film adaptations of Campbell's science fiction work, namely the fun but dated The Thing from Another World (1951 / trailer); the truly great The Thing (1982 / trailer), which unbelievably enough was shredded by the critics when it came out; and the superfluous and already forgotten remake/prequel from 2011, The Thing (2011 / trailer). Only, in Horror Express, the alien is not a shape-shifting "thing" that assimilates organisms but is of energy matter and either drains one's memories or takes over the body by inhabiting the brain. 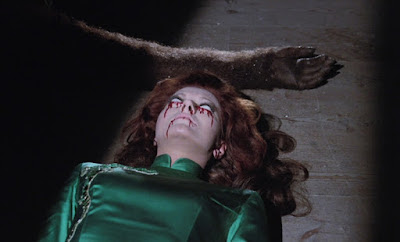 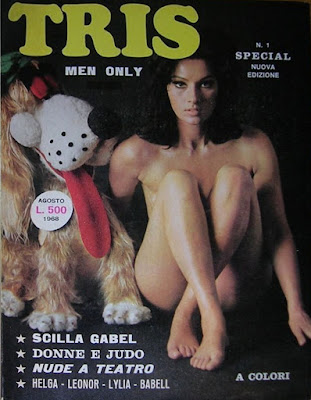 * Ah, Helga Liné, the Euro-Babe of Yesteryear! T'was that late-night Creature Feature broadcast decades ago that we, still in our peachfuzz years, first had an inkling that there might be something called glamour, for her character, Natasha, was all that and more. (Silvia Tortosa, the other beauty of the film, might have been more traditionally beautiful, but Helga was simply gobsmackingly glamorous.) Berlin-born, when Hitler took power Helga Liné fled with her family to Portugal, where at the age of nine she was in her first film. She became a dancer, after which came the circus and a time as a model. In the 60s, she went to Spain — where she became the Horror and Western Queen we all know and appreciate today. Among her films: The Blancheville Monster (1963 / Italian trailer), Nightmare Castle (1965 / trailer), Der Mörder mit dem Seidenschal (1966 / trailer), Umberto Lenzi's Kriminal (1966 / credits) and So Sweet... So Perverse (1969 / trailer), The Loreley's Grasp (1973 / trailer), The Dracula Saga (1973 / trailer), Open Season (1974 / trailer) with Richard Lynch, Death Will Have Your Eyes (1974 / trailer) with Farley Granger, José Ramón Larraz's Stigma (1980 / full film) and Black Candles (1982 / scene), and so much more.... 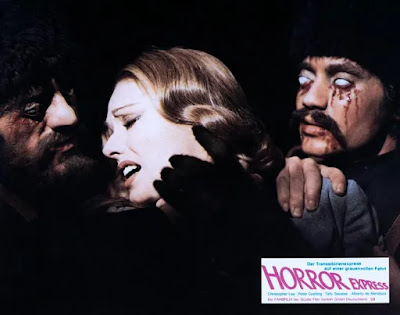 Before the train even leaves the station, the first body falls in what is basically a wonderfully entertaining science fiction, monster-on-the-loose and then evil-alien-amongst-us body counter. And rest assured, for all its science fiction and period-set genre horror trappings, Horror Express is very much a body counter: after the death of the lock-picking criminal (Hiroshi Kitatawa) at the Shanghai train station, the bodies begin to drop quickly as Dr Wells and Prof. Saxton slowly find out the what, why, how, and who of the killer. And with the arrival of the NYC-accented Cossack, Capt Kazan (Telly Savalas [21 Jan 1922 – 22 Jan 1994] of Pretty Maids All in a Row [1971 / trailer], Lisa and the Devil [1974 / trailer], Faceless [1987 / trailer] and more), the setting is perfect for the wonderfully wonked-out climax that includes a desperate escape through masses of zombified Cossack soldiers, a train track leading to a cliff, and an explosive finale! 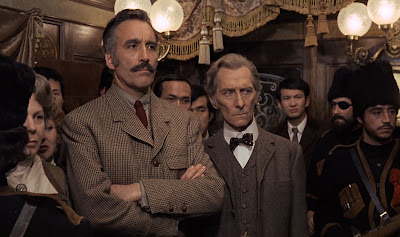 Horror Express is really not without its cheese and sloppy moments, which do become a bit more visible with repeated viewings. But it is also a finely paced tale that contains some surprises, and it is populated with memorable characters, including some that you regret seeing their demise. Cushing and Lee do a superb job onscreen, and their chemistry grows along with the increasing respect they begin to give each other. The science it totally wonky — brains wiped as smooth as a baby's body because the memories have been robbed, the eye fluids of the dead creature store the images of everything it has ever seen, etc. — but it hardly detracts from the deliberate but constant push of the narrative. And if the mini-gore segments of cranial autopsies look a bit fake now, in their day they were gore galore and can still probably scar a child for a long time coming, as will the boiled white eyes of the dead. 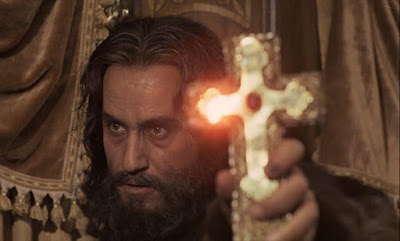 Other treats Horror Express also has to offer is the strikingly haunting melody interlaced throughout the film, part of a superb musical soundtrack by first-time composer John Cacavas (13 Aug 1930 – 28 Jan 2014), which on more than one occasion is worked into the actual narrative itself. And even in its current washed-out and scratched form found online and the cheapo DVDs, Horror Express remains a visual treat, clearly indicating that the original movie must have been a treat for the eyes not just for the beauty of Helga Ligé and Silvia Tortosa but for the deep, vibrant colors, interplay of different levels of darkness, and the contrasts of dark (unseen) and light (seen). It is a film that screams for, and actually deserves, restoration. 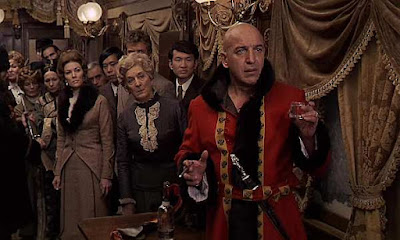 As common in multi-national productions of the time, the dialogue was all post-dubbed, but in Horror Express it is, in general, not obtrusive: Christopher Lee, Peter Cushing, and Telly Savalas all obviously provide their own voices. 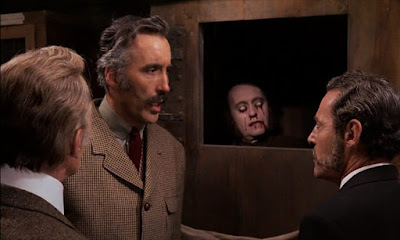 Horror Express: if you haven't seen it yet, you are truly missing something. 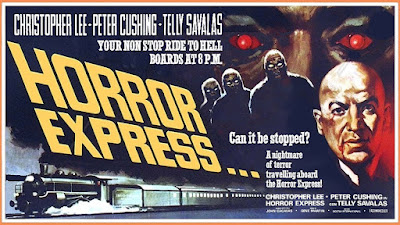 John Cacavas's end title music
to Horror Express:
Posted by Abraham at 6:57:00 AM