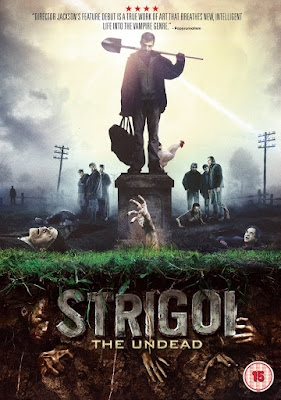 Okay, this film was unexpected. The DVD was entitled Day of the Undead, a titular allusion to Day of the Dead (1985 / trailer) and/or Day of the Dead (2008 / trailer) if there ever was one, and was picked up for our weekly bad-film night at the local Euro Shop (back in the pre-inflation days, when they were still called "1 Euro Shop") by one of the zombie-loving regulars. Cheap zombie flicks are a fave at bad-film night, if only because they are so often so hilariously bad — they're like Velveeta: you know what you're getting and you want it, even if you think it is shit. 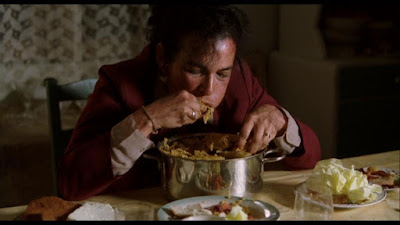 But as we all know, DVD packaging is often deceiving, as was the case here: instead of a shamefully shitty zombie film, we got an amazingly entertaining, well-made, and interesting movie about a minor outbreak of strigoi in backwater Romania. Indeed, the movie's real — as in original — title is exactly that: Strigoi.
Trailer to
Strigoi:
So who made the movie? Someone named Faye Jackson, like the wrestler. Not a long resume to her name, and mostly short films. Why, we wonder, do films like this not lead to a career? (Easy answer: because she is a woman.) Over at LinkedIn, she tells us: "I'm an award winning writer-director. I specialize in horror and fantasy, drawing much of my inspiration from folklore, fairy tale and history." All the better for us, the viewer, and Strigoi also reflects an inspiration from folklore, fairy tale and history — though it really doesn't explain why and how a filmmaker from Great Britain ended up making a black comedy cum horror movie like this one in Romania with a Romanian cast. Since the mouth movements tend generally to match the words said, the movie was obviously shot (at least in part) in English, but the accents and locations and overall vibe (and the fabulous Balkan Beat soundtrack) definitely says "This is not America the UK." (Supposedly, it's Polodeni, Romania, but we couldn't find a Polodeni anywhere on Google Maps.) 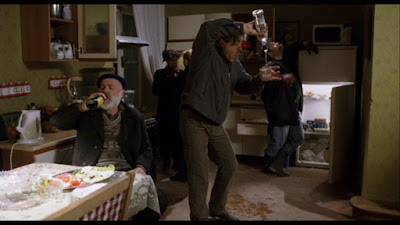 Strigoi, for those of you who don't know (we didn't prior to this movie) are what vampires are called in Romania, thus the "Undead" of the DVD title. (The "Day", however, is all wrong, for as appropriate to contemporary vampire lore, strigoi, or at least the truly dead strigoi, sleep all day and only come out at night.) Here, however, the strigoi are not out for either blood or brains, though one, Ileana Tirescu (Roxana Guttman of Nekro [1997 / trailer]), is insatiably hungry; nor, for that matter, does their bite lead to infection and eventual conversion. (As in the case of vampires and zombies, but you surely know that already.) One would be hard placed to state that the three "undead" strigoi even fully realize that they are dead, as it is not exactly as if they act all that differently dead as they did alive. To that, there is also a strigoi that is "alive", a quirk to that region's supernatural entity that is definitely foreign to the Western world, but could well explain the Republican Party in the USA. 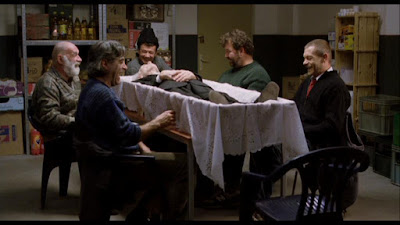 Strigoi opens with a wryly comical double murder of Ileana and her Mafioso husband Constantin Tirescu (Constantin Barbulescu of Talisman [1998] and Return of the Living Dead: Necropolis [2005]), committed in the company and under the auspices of the whole town. Soon thereafter, Vlad Cozma (Catalin Paraschiv of Return of the Living Dead: Rave to the Grave [2005 / trailer] and Pumkinhead: Ashes to Ashes [2006 / trailer]), returns from his failed attempt to study medicine in Italy, taking refuge with his elderly grandfather Nicolai (Rudy Rosenfeld of Wer [2014 / trailer] and Madhouse [2004 / trailer]). A series of illogical events lead him to believe that the elderly owner of the local shop may have been murdered, and the cryptic behavior of the townspeople does little to sooth his suspicions. Pursuing his suspicions, he (and the townspeople) are suddenly confronted by the supernatural... 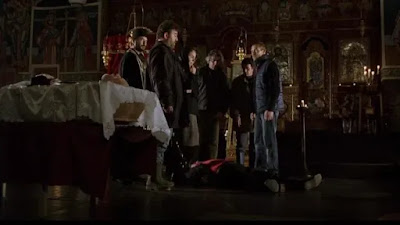 Strigoi is light on blood and gore, but for a few open-heart scenes, and more time is spent on Vlad's Hardy Boys-like detective work than on anything truly horrific. As a result, fans of gory horror and bodycount will probably be disappointed by this offbeat, dryly humorous horror comedy. Faye Jackson is far more interested in her characters and their history and life than she is in anything "horrific", and, at least in the case of Vlad, she is also interested in showing the gradual evolution of a queasy loser (or "pussy", as everyone calls him) into a man of action when action is needed. The journey there is meandering and evenly paced, and mostly without the money shots expected of contemporary scare films. 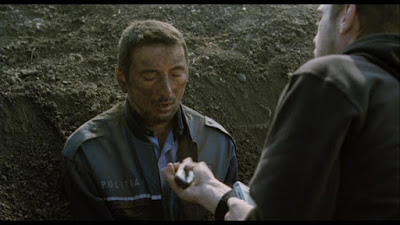 Strigoi, with its tangents and pacing and overall foreign-film look, probably owes more to what was once called "art film" than to conventional contemporary horror, but whereas we once would mean that as an insult, here we mean it as a complement. The film is simply different in a good way, with a lot of personality (not to mention a bitchin' Balkan Beat soundtrack), and is definitely undeserving of its general obscurity. True, sometimes it is a bit too leisurely in its tempo, but for that, when the resolution finally comes around, it feels as if the movie is ending too early. (We wanted more, in any event.) 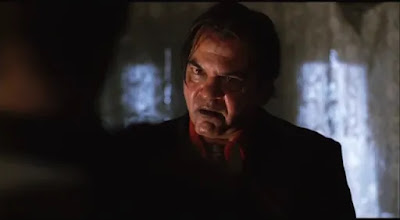 Give the movie a go — Strigoi is not only a truly unique film, it is one of those horror movies you can watch with people who don't like horror. 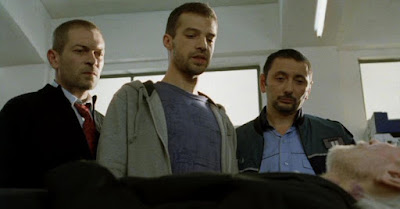