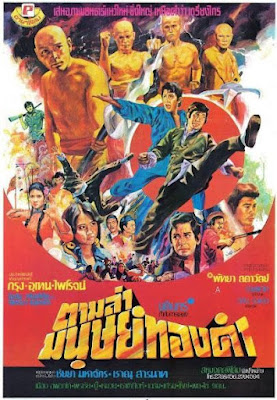 Thai title: The Hunt for the Golden Man. Despite the rumors and what imdb says, the great Anita Mui (10 Oct 1963 – 30 Dec 2003), "the Madonna of the East", does not appear in this movie (as "Anita Nui"). By the mid-80s, she was already way too big a singing star to appear in Z-level crap like this. (See: A Better Tomorrow III [1989])
Anita Mui's big hit of 1985,
Bad Girls:
And so it was yesterday night that we pulled out a two-sided DVD from our never-shrinking pile of cheap, dead data-carrier technology, a bargain-basement, two-film, Dollar Store Eastwestdvd that has sat around since even longer than when we watched Return of the Deadly Blade (1981) twelve years ago, and decided it was time at last to watch the second film so we could finally toss the DVD. And so we came to screen The Golden Destroyers, a.k.a. 18 Golden Destroyers, an absolutely appalling film about which one should probably not write, for any description of the idiocies and awfulness that permeate every aspect of this patchwork movie cannot help but make the movie sound more entertaining than it is. Sometimes bad films are simply bad, and Golden Destroyers is an exemplary film in this regard. 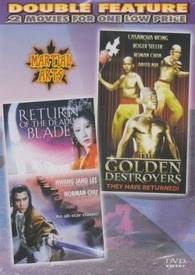 Unbelievably enough, Golden Destroyers [the international title] was the directorial debut of Gordon Chan,* by now (as in "2022") a relatively well-known and very successful Hong Kong director and producer. True, we were less than thrilled by his The Final Option (1994), but he has since worked with some big Hong Kong names that are even known internationally, for example: Jet Li in Fist of Legend (1994 / trailer); Andy Lau in Armageddon (1997 / trailer) and Cat and Mouse (2003 / trailer), Jackie Chan in Thunderbolt (1995 / trailer) and The Medallion (2003 / trailer), and the babalicious Maggie Q (of Naked Weapon [2002]) in The King of Fighters (2010 / trailer). 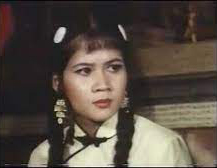 * Some sources claim that this "Gordon Chan" is not that "Gordon Chan" but actually merely a(nother) pseudonym for Godfrey Ho, whom we talk about further down in this review. We see that as being entirely possible.
Golden Destroyers –
the full movie:
When watching Golden Destroyers, however, one can only wonder that Gordon Chan was ever given another movie to direct, for this movie here is the apogee of directorial incompetence: scenes are poorly framed and composed, the fights look like skits from Saturday Night Live, and even scenes that should be exciting (like the out-of-the-blue massacre of a rural village) are sleep-inducing. (Although the bit about the Golden Destroyer who, obviously miffed that a little girl escaped his killing grasp by crawling between his legs, goes after a piglet is pretty funny.)
A typical fight scene from
Golden Destroyers:
And what is the movie about, you ask? Well, the movie's original title, 18 Golden Destroyers, already reveals that in good exploitation cum mockbuster fashion, the movie was made to ride on the coattails of an earlier, far more successful movie, in this case 18 Bronzemen (1976 / full film) — and to a lesser extent, the sequel Return of the 18 Bronzemen (1976 / trailer). 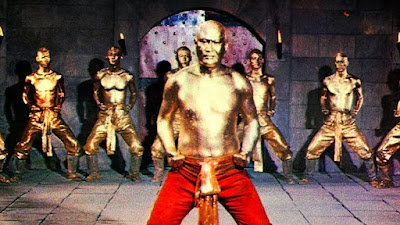 In Golden Destroyers, the warriors are now made of gold because "gold is harder than bronze" (an alternative fact that would make Kellyanne Conway proud, needless to say). And much like the Bronzemen movies are set in the days of ancient China, the opening credit scene of Golden Destroyers leads one to expect a costume sock-'em chop-'em movie: in a period setting, Casanova Wong, a.k.a. Ho Wang, fends off a throng of gold-plated fighters — but that scene in taken from another film, Rivals of the Silver Fox (1979 / trailer), and has nothing to with Golden Destroyers. 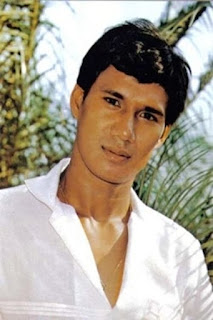 No sooner are the credits over, than does the film enter the modern age, and we see three Thai cops — one played by a young Sorapong "Hyman Chatri" Chatree (of Ong-bak II [2008] and Ong-bak III [2010], looking all matinee idol directly above) — arriving in Hong Kong by boat, without bags instead of disappearing baggage, for vacation. From there, they go to a topless bar where the girls cover their nipples with tape and they end up befriending a barely of legal age, Thai orphan named Ginger and... 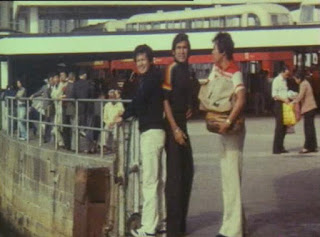 Well, there are a lot of extraneous and unimportant vignettes to the movie, but the core plot concerns how the cops end up meeting an ancient master (with glued-on cotton eyebrows and moustache) in a temple who can revive the dead to make unstoppable golden "robots". When he takes a nap, his second-in-command decides to go worldly (Money! Girls! Power!) and disappears to the woods outside of Bangkok with six or so golden destroyers to take over the world. The cops, with Ginger and joined by two friends and two loyal temple monks and the lone female in the temple, Carol, eventually make their way to the woods to stop Mr. Evil and his ultimately stoppable, unstoppable golden destroyers. 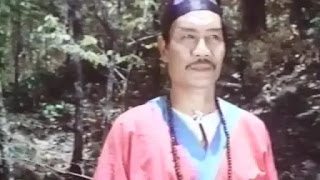 So far, sounds okay, but the execution is painful to watch. Bad acting, costumes and editing and all-over-the-place narrative aside, the fight choreography is an insult to the genre, if not industry. The golden destroyers themselves lumber forward at a snail's pace, and if the various people they pursue did not turn every half-minute to say "Go away" or "Leave me alone" and then stumble, everyone they kill could have escaped easily. The previously mentioned "big scene" in which they invade and decimate a rural town* makes no real narrative sense, and like everything else in the movie is handled so clumsily that despite all the action it seems as if there is no action (that is a problem that runs throughout the whole movie, actually). And how often can one say or notice "bullets have no effect" or "they're indestructible" and then nevertheless still shoot and toss grenades? Everyone in the movie, just like the narrative itself, is more than a few cans short of a six-pack.
* The hardiest laugh of the movie has to be when Carol and a loyal monk wander through the decimated town and one says, "It's a pity we're too late." 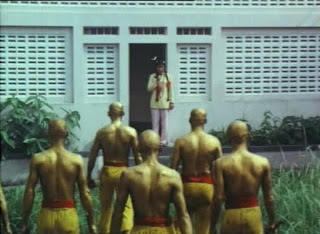 Although the inexperience of the director is without doubt a contributing factor to the overall miserableness of Golden Destroyers, the most blame should probably be placed on the movie's "scriptwriter", Godfrey Ho. Now retired and mostly unknown outside of Hong Kong, while active he was basically the Al Adamson (25 Jul 1929 – 2 Aug 1995) of the industry there — but whereas Al Adamson only managed some 45-odd titles during his 20-odd year career, Ho managed roughly 80 in between 1980 and 1990 alone.* In his day, Godfrey Ho was, like Al, a master of the "cut and paste" technique: he would reuse and recombine footage from finished and never-finished or unreleased movies time again to create new movies or movie versions. (Working in the Thai, Chinese and Filipino markets, he had access to a broad array of films to use and likewise diverse audiences to cut his films for.) Feasibly, there is probably more than one version of this movie out there. 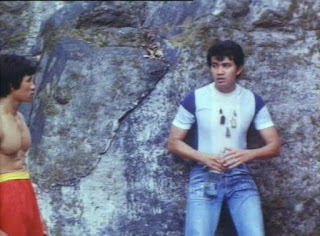 But while Golden Destroyers does stretch its running time by including the opening scene taken from Rivals of the Silver Fox, the movie itself does not seem to be a patchwork created from other finished films. For that, however, the movie's narrative does have a patchwork quality, as if scenes were snipped from diverse scripts and then pasted together to make a semi-storyline that was then filmed. And this disjointedness, combined with all the other flaws of the film, make for a pretty miserable viewing experience and nothing else. Golden Destroyers is a sleeping pill lacking any redeeming qualities; a frustrating, unbearably dull and boring movie of indescribable incompetence in which, unluckily, the incompetence never manages to achieve that special otherworldly weirdness that makes so many bad films (including many of Ho's own) so much fun. 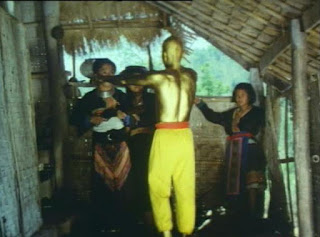