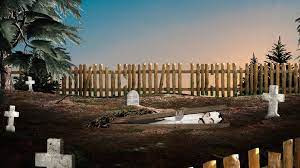 We say serendipity because earlier this month we learned, by way of the excellent feature film Strigio (2009), that the name for the Romanian variant of the vampire in strigio. The Polish name of pretty much the same kind of vampire reveals itself as somewhat similar: strzygoń. Obarski's animated short, The Strzygoń & How to Deal with Him, made as part of the Upiór Project, pretty much tells you everything you need to know about the mythological creature which, going by the description found at YouTube, definitely mirrors everything we learned about that variant of the undead in the movie Strigio.
As Obarski explains: "The strzygoń is a figure that appears often in Polish folk mythology and under many names: it can be a man with two souls who rises from the grave to scare and strangle the living, yet it can also be a caring — yet still dead — husband and father... There is only one way to free yourself from them forever. This animation explaining strzygoń behavior, including how to get rid of them, is based on 19th-century folk legends and made using resources from libraries and digital museums. [YouTube]"
The short is quirky and funny, intriguing and entertaining, and even educational – Everything You Ever Wanted to Know About Strzygoń, you could say. Enjoy.
The Strzygoń & How to Deal with Him:
PS: If you liked the above, dare we suggest you give Obarski's Dead Liver a go?
Posted by Abraham at 8:06:00 AM