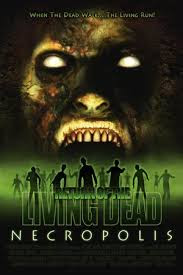 Long ago, some dude directed a cheap little B&W independent movie entitled Night of the Living Dead (1968), which eventually (1999, to be exact) was deemed "culturally, historically, or aesthetically significant" by the Library of Congress and selected for preservation in the National Film Registry. Long before that day, however, the dude that directed, photographed, edited and co-wrote the "culturally, historically, or aesthetically significant" horror film, George A. Romero (4 Feb 1940 – 16 July 2017), and his co-scriptwriter John A Russo, had a minor creative issue regarding how and where the living dead concept should go, so they went their separate ways, Romero keeping the phrase "[...] of the Dead" and eventually making five further serious zombie films of variable quality between 1978 and 2009, and Russo finally returning to film zombies in 1985 when (after Tobe Hooper bowed out) he teamed up with Dan O'Bannon to tweak aspects of the zombie cannon ("Brains!"*) and make The Return of the Living Dead (trailer), possibly the first flesh-eating zombie black comedy ever made. Defying all expectations, the movie was not only good, but is even considered a minor classic of the zombie genre. 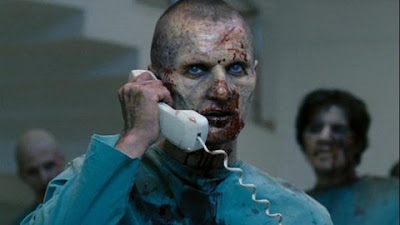 * Aside from brain-eating, they also introduced the running dead, but for some odd reason the latter new zombie quirk remained pretty much unnoticed till Zack Snyder's remake of Dawn of the Dead (2004 / trailer) re-introduced it, ramped up the speed, took all the credit for it, and added running zombies to the contemporary living dead cannon. 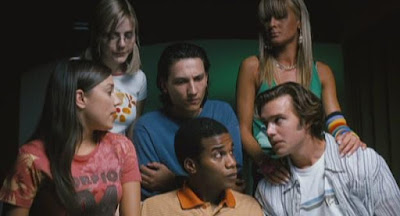 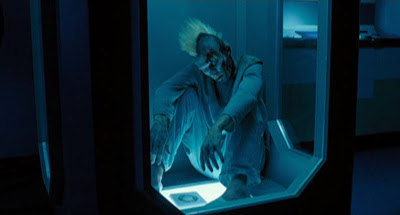 It does seem a bit of a surprise that director Ellory Elkayem managed to serve up the cinematic pile of poo that is Return of the Living Dead: Necropolis. Long ago, he not only made the more than mildly entertaining killer cockroach film, They Nest (2000 / trailer), but went on to mainstream success with the stupid but funny giant-spider flick, Eight-Legged Freaks (2002 / trailer). The step down to Return of the Living Dead: Necropolis, to offer an analogy or two, is a bit like Maker's Mark to Econo Buy, "Honest" Abraham Lincoln to "Deranged" Donald Trump, ten inches to two, double Ds to double As,* a New Yorker film review to a wasted life review. A step down so deep that it is relatively easy to believe that the man hasn't directed another feature film since 2009 (when, in what can only be seen as an act of desperation for employment, he made the D2V comedy Without a Paddle: Nature's Calling [trailer]). 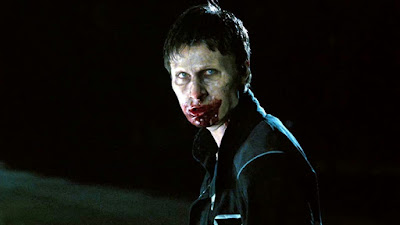 * Here, with the last, in all honesty and unlike with just two inches, personality can go a long way. Return of the Living Dead: Necropolis, however, doesn't have much personality. 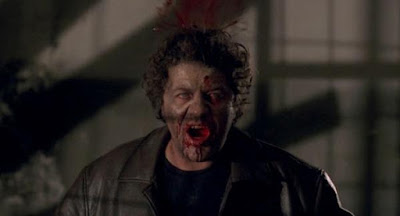 Necropolis exists in two main versions, an R-rated version that got released on DVD and a heavily circumcised one that got aired on TV. One has more blood and one has less, but we assume that both suck equally as much. But for one thing, that the film is so bad has relatively little to do with where it sits or how it follows the cannons of zombiehood, both that of its franchise and the genre in general. The one thing, however, is major: these zombies still want brains, but are hardly unstoppable or nearly unstoppable. They can be killed easily, if not even easier than a human — a bullet or two anywhere in the body seems to send most of them home to the afterlife. Thus, as the protagonists of this movie are generally heavily armed, they never truly seem to be all that scary of a threat. Which doesn't mean they don't kill a person or two — to give the movie its only truly deserved kudos: the bratty little brother, a character too young to die, usually, gets his brains eaten — it is just that, considering all the build-up until the "zombies" get loose, they dispatch easily.

And there is a lot of build-up in Necropolis. After the initial scenes in Chernobyl (the location footage used is by far the most interesting thing in the whole movie), nothing actually happens for the longest of time and the time is padded with boring motor-cross riding or stretched-out scenes of teenage life as lived by people too old to be teens. Then, suddenly, once the dick-ass, too-old-to-be-a-teenager, teenager alpha-male Zeke (Elvin Dandel of Pumpkinhead: Blood Feud [2007 / trailer]) gets kidnapped, the movie turns into a sixth-rate version of Mission Impossible (the series, not the movies), but with "teenagers" instead of master spies. Once the impenetrable Hybra Tech lab has finally been penetrated, there's way too much exposition before, suddenly, the lead character Julian Garrison (John Keefe*) and friends illogically go searching for his known-to-be-dead parents. The parental units, in turn, get a build-up in the film as some sort of unstoppable, semi-Borg killing machines but prove to easier to stop than the Energizer Bunny. (Really: what good are zombie soldiers if they die as quickly and easily as normal people?) 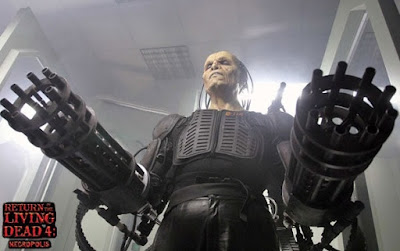 * As of this writing (8 June 2019), Wikipedia claims that John Keefe "is now a Latin teacher at Shrewsbury House School in Surbiton, United Kingdom." If true, the change of career was intelligent, for the guy can't act. 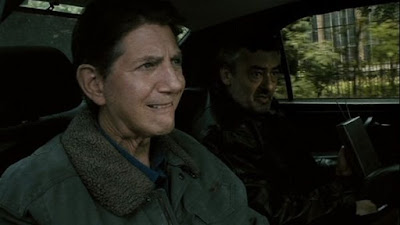 When watching Necropolis, one begins to feel sorry for not just the director, but for all those involved. The two lead girls, Becky (Aimee-Lynn Chadwick) and Katie (Jana Kramer), prove to be the best actors of the movie, if only because they seem so game. Ditto with Cory Hardrict (of The Day [2011 / trailer]), who plays Cody, the token Afro American who, for a change, is neither the source of laughter nor simple fodder. In all their defense, the "teenage" actors are all new at the game [acting], and half-baked & poorly written & totally uninteresting tax deductions like this turkey are all part of beginning a career. This is not the case of veteran actor Peter Coyote, however, who plays the bad guy cum mad scientist of the flick, Uncle Charles. True, Coyote is an extremely active actor with an extremely diverse repertoire of movies to his name, but here his performance is as embarrassing as the movie itself. More than once it seems as if he is attempting to add a level of campiness to the proceedings, but instead it comes across as simple overacting, or as if he's mugging for the camera. (Once or twice, he also looks seriously unwell, which causes one to suddenly think of Bela Lugosi in his Ed Wood years.) By the final scene, Coyote manages to come in second to his onscreen nephew Julian Garrison (John Keefe) as the worst actor in the movie — not something one expects from a man who, unlike all the non-teenagers of the movie, has a tested, viable career and is continually employed. (What the hell, maybe he wanted a new car...) 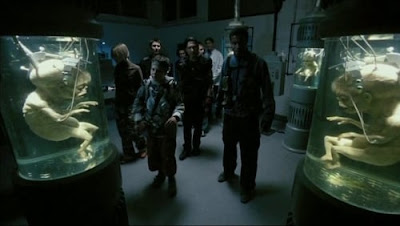 Necropolis fails as a zombie film, be one a fan of serious or funny undead. Directorially, it is hardly a visual feast and by and large looks like the television movie that it is — the occasional explosions of gore don't do all that much to change that. Thrills, like laughs and/or scares, are few to be found. In regard to its narrative, a believable temporality — Uncle Charles's trip to the Ukraine and back, the massive amount of "undead" at Hybra vs. when the vat of zombie-making chemicals was procured, the passage of time between any given scene of the movie — is not even attempted, and everything that transpires between the padding is way too inane, uninteresting, and unconvincing considering how seriously it is all presented. 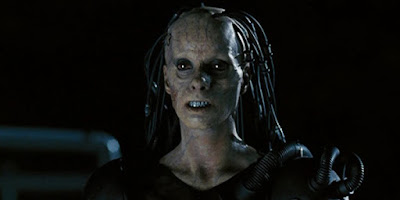 I agree with your critic.

I was surprised however by the sequel, Rave to the Grave, that I found, if not better, at least a little enjoyable as a bad comedy. There are two over-stupid cops and a little more boobage than in this one (because apparently, girls listening to techno music tend to show their breasts) (and it's always nice to see boobs when you're slightly bored by a movie).

Then again, perhaps it was just because I expected total crap and was in a good mood.

Bad comedy and girls who show boobage to techno music — "Rave to the Grave" already sounds way better than this baby here.