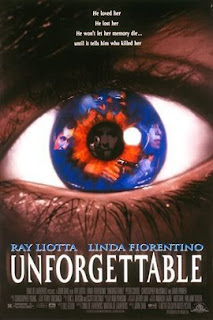 Unforgettable (trailer) is an odd mixture of science fiction and thriller that veers between keeping the viewer interested and putting him to sleep and, in the end, is an unsatisfying and derivative concoction obviously taken much too seriously by everyone involved. The effects and the stunts may be completely up-to-date, but the story is weak 1930's B-movie—the only thing missing is John Carradine or Bela Lugosi hamming it up.
Director John Dahl is capable of making watchable films, as has been evidenced by such fine and diverse films as the teenagers-endangered-by-a- psycho-road film Joy Ride (2001/trailer), the black comedy You Kill Me (2007/trailer) and the modern film noir (and unjustifiably unknown) Red Rock West (1992/trailer). Dahl's follow up to Red Rock West, The Last Seduction (1994/trailer), may have gotten the most attention of all his films to date, but that film's script has almost as many flaws as the script of Unforgettable, and is primarily watchable due to Linda Fiorentino's excellent turn as a cold-hearted manipulative and evil bitch (who wins). Fiorentino also stars in Unforgettable, but this time she plays a rather unassuming, mousy character, Dr. Martha Briggs. Briggs is experimenting on rats with a serum that, when mixed with spinal fluids and injected, transfers the memories of the first rat into the one injected. 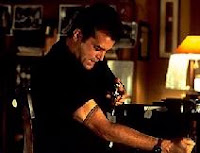 Unforgettable tells the tall tale of Dr. David Krane (a beginning-to-bloat Ray Liotta), a medical examiner for the Seattle Police Department who is believed by everyone to be the murderer of his wife. Freed on a technicality, he himself was too drunk the night of the murder to know for sure that he didn't actually do it. Hearing about Dr. Briggs' experiments, Krane is hot to do the drug using the spinal fluids of long dead wife (a vial of which just happens to be in storage at the medical examiner's storage room at the police station). Stealing some of the experimental drug from Martha's university office, in no time flat he has shot himself up not only with the fluids of his wife, but with those of a pretty, young art student killed in a drugstore massacre and the fluids of a brain-dead supposed would-be suicide as well. All the while Martha follows him around lecturing him on how bad it is for his heart and explaining anything that might possibly not be understood by the viewer. 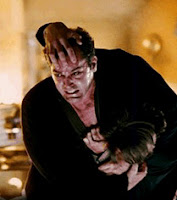 Like any good over-the-top mad scientist film, Unforgettable features everything and more, including exploding labs, chase scenes, a shootout at in a church baptism, a woman taped to a chair in a burning room, a mass killing in a drugstore, adultery, alcoholism and broken marriages. On top of that, whenever the story gets a little dull or Dahl decides that (for whatever reason) a shock is needed, Briggs has an unexpected flashback or hallucination. Why he has hallucinations when the serum should only transfer memories is unexplained, but logic is never a strong point of this type of cheesy flicks.

Of course, the true murderer is revealed by the movie's end and there is a big punch-out fight in a burning house before the big explosion, but somehow little in this film actually ignites. Dahl once again uses a slow, steady style of filmmaking that functions well with intelligently convoluted and complicated stories of the more traditional film noir vein—like in Red Rock West or Kill Me Again (1989)—but in this weird, hybrid turkey it merely seems plodding.
Not surprisingly, Bill Geddie's script was liberally plagiarized by fellow scriptwriter Tom Swale the following year for a substandard television movie Murder in My Mind (1997). Starring television perennials Nicolette Sheridan and Stacy Keach, the latter film at least served to make Dahl's movie seem better, if only by comparison.