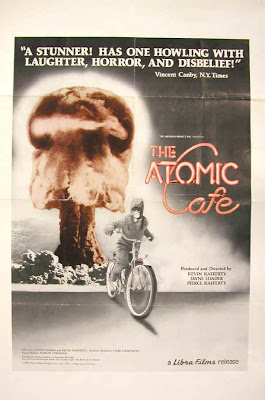 (Directed by Kevin Rafferty, Jayne Loader & Pierce Rafferty.) A truly great, hilarious, sickening, unbelievable, tragic film. Using material culled from military training films, newsreels, governmental propaganda movies and educational school films, the directors have strung together a cynical and damning indictment of both the U.S. Government’s unforgivable abuse of the world’s trust and the American public’s "Love the Bomb" attitude during the Cold War. The Atomic Cafe alternately sends chills of disbelief up your spine or leaves you laughing (even as you feel sick) in horror. Propagating such inane advice as "duck and cover," the film clips selected are so revoltingly facetious that one finds it hard to believe that anyone ever took them seriously. This film is much more a horror film than any Hollywood special effects extravaganza ever could be, especially since so many of the names, faces and places are real, such as the Bikini Islands, the Rosenbergs or Lloyd Benson and Richard Nixon, and because the passage of time has revealed so much of what is shown and said to be flat-out lies. Aside from the initial scenes of Japanese victims of the bombs dropped in Hiroshima and Nagasaki, the horror is less based on the visually repulsive than the simple un-believability of it all. This is your land, those are your parents and grandparents, that is your government—and you still believe what they say about genetically altered foodstuffs and hormones in your meat? (Oh, yeah, and don’t forget: Iraq had weapons of mass destruction and was responsible for the Twin Towers.) If the film seems a bit long at times, it has less to do with an excess of scenes than it does with the deadening of the nerves and senses the over abundance of stupidity displayed causes. Could it be we are just as easily duped about things nowadays as the generations before? (A rhetorical question at best.)