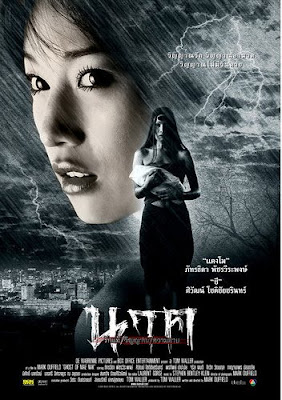 (Trailer.) The latest version of the tragic ghost story of Mae Nak Phra Khanong—or simply Mae Nak—one of Thailand’s most popular and well-known ghost stories. Supposedly based on true events, there is even a shrine to Mae Nak to be found in Bangkok. According to the story, while her husband Mak is away at war, Mae Nak dies in childbirth (as does the child). But when the unknowing Mak returns home, he finds his loving wife and new child waiting for him. Neighbors that try to tell of the truth meet terrible ends at the hands of Mae Nak, 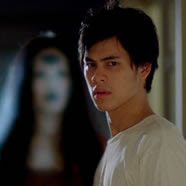 who is so in love with her husband that she cannot leave him even in death. Once he does indeed finally learn the truth, he takes refuge in a temple, where the ghost cannot enter, and then a bunch of other stuff happens before things end. But before it ends, a monk cuts an oval from her skull to make a brooch for his belt (somehow this is to ensure that she never rises again), but over the centuries since then the brooch has gone lost...

the most internationally and artistically successful film version of the story—of which there is said to be 20 versions to date—is Nonzee Nimibutr's 1997 film entitled Nang Nak. A hit both in Thailand and abroad, somewhere along the line the British cinematographer Mark Duffield caught the film and decided that the story would be the good basis of a teenager-oriented, Thai body-count film. He did some research on the story and wrote the script, had it translated into Thai, and in 2005 The Ghost of Mae Nak, his directorial debut, hit the screens of Thailand. And now it is available on DVD.

The updated version that Duffield serves up is set in modern-day Bangkok and tells the story of Nak (Pataratida Pacharawirapong) and Mak (Siwat Chotchaicharin), a young couple in love that are in search of a house of their own where they can move to once married.

Luck comes their way in the form of an old fixer-upper proffered by a fat and sleazy real-estate man named Angel (Meesak Nakarat). Little do they know that it is the very house that Mae Nak (Thai model Porntip Papanai) once lived, and that their own great love has seemingly awoken her. (Or, perhaps, the new Mak is a reincarnation of the old Mak—the what and why of Mae Nak’s awakening is never truly satisfactorily explained—in the opening teaser scene, she is even the protagonist horror of new Mak's nightmare, although the couple have yet to come into contact with the house. In any event, something awakens the ghost of Mak.) Along the way, Mak decides to buy an old bone brooch for Nak, which just happens to turn out to be the very one made from Mae Nak's forehead. (What a coincidence, huh?) Once married, criminals break into the house and steal everything they own. Mak stumbles upon one of the crooks as he tries to sell some of the stolen goods; Mak promptly gets run over by the crook and for the rest of the film lies in a coma in the hospital. The ghost, in the meantime, first kills everyone that in anyway threatens the life of Nak and Mak and then possesses Mak, obviously with the intention of taking him with her as her new love. It is up to Nak to save her beloved husband by finding Mae Nak's buried remains—which she actually does with the first hole she has a helpful friend dig for her—and save his life my returning the oval bone brooch to the skull.

The Ghost of Mae Nak is actually influenced by films like Final Destination II (2003/trailer) as much as it is by the original Thai legend, for it enjoys some truly hilarious gore sequences as the body count grows. The film is in no way an earthshaking cinematic experience, and has some obvious budgetary deficits, but as a teenager-oriented horror film it functions well enough. The differences in the Thai culture from that of the West is continually obvious in the film,

and this actually is a great asset, for it gives what is in the end a relatively derivative but mildly entertaining gore film an added flavour. The acting is nicely subdued for a Thai film, and Duffield keeps a sure hand on the direction, even if some of the horror bits are hilariously over the top—the roomful of medical staff that is frozen aloft by some sort of magical electrical storm coming from the possessed Mak's mouth is absolutely guffaw-inducing, for example. There are a few proper scares, usually in the form of the sudden appearance of the long-haired, pale ghost of Mak in the typical fashion of contemporary Japanese ghost flicks, and some fabulous splatter set pieces that are as funny as they are disgusting. The ending is groan-enduringly happy—the dead Mak saved and revived—and a typically ambiguous final scene infers that more might follow. In general, were it not a Thai flick, The Ghost of Mae Nak would be a bomb, but it is exactly because it is a Thai flick and so many cultural differences keep popping up that the film’s derivativeness becomes more palatable. Still, in the end, it is hardly imperative viewing.