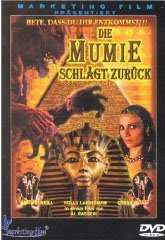 The Mummy Theme Park is without a doubt a unique film. Were Tim Burton a talentless hack lacking both vision and irony (and money) but still enamored with the use of miniatures, set pieces and matte backdrops, he might possibly have made movies like this one. But luckily, Mr Burton is not only talented but is also gifted with both a filmic vision and a supreme sense of irony, so it is doubtful he shall ever sink to the level of this filmic atrocity (although, in truth, he did misplace all his creative assets once, when he made Planet of the Apes (2001/trailer)).

Massimiliano Cerchi (aka Al Passeri), the Italian behind The Mummy Theme Park, however, is obviously not a talented individual, for although it could be argued that the film does evidence some sort of individual vision, the film nonetheless displays absolutely no irony or directorial or narrative aptitude. It is a cinematic travesty that almost defies description, a film so dilettantish and idiotic that it is painful to watch. Worse, The Mummy Theme Park doesn't even work on a “so bad its good” level because it was obviously made to be bad by design. A bad mistake, for one of the key secret ingredients behind almost all enjoyable bad films is that they were not made to be bad on purpose.

A key aspect to such classic flotsam like that made by Ed Wood, Lee Frost, Ted V. Mykels or Al Adamson or to such anti-masterpieces of yesteryear like the original Reefer Madness (1936/trailer) or The Beginning of the End (1956/trailer), Showgirls (1995/trailer) or even Striptease (1996/trailer) is that the films were serious cinematic attempts, the best possible product that those involved were able to make. The otherworldliness that such classics of bad film exude is something that actually requires great talent to be recreated consciously — but, as was mentioned before, Mr. Cerchi is not particularly talented.

An earthquake in Egypt opens a rift in the desert and reveals a long-lost, underground city of Necropolis. Sheik El Sahid (Cyrus Elias, whose career of small parts defies his thespian talents) decides to convert the city of the dead into an underground Mummy Theme Park, despite the curse on the entranceway that promises death to all those that disturb the peace of the dead. To publicize his venture, the Sheik brings two obnoxiously dislikable photographers, Dan (Adam O'Neil) and Julie (Holly Laningham), over from the US. The sheik has made the mummies bionic, controlled by chips implanted in their heads. But when Dan starts snapping his photographs, the flash of his camera has the unexpected effect of causing the mummies to go out of control. After way too many un-funny and overly extended scenes, the shit hits the fan and the rift closes and more-or-less everyone but Dan and Julie die...

As a whole, The Mummy Theme Park comes across like some sort of unwatchable kiddy film interspaced with some of the worst CGI beheadings and slicings ever done, an effective man-pukes-out-his-insides scene, a single scene of limited nudity (a photo shoot meant to exemplify the photographic talent of the film's hero), and one scene of a sliming mummy. The use of miniatures is mildly interesting at first, but they quickly lose all effectiveness because Cerchi not only reuses the same shots too often but also continually (and consciously) draws attention to his cost-saving activities. The acting is as equally ghastly as the direction, which could explain why most of the "actors" involved in this eyesore have yet to make another film.
Definitely not an undiscovered “bad” classic, The Mummy Theme Park is a direct-to-dvd Z-film that is best left on the shelf.
Posted by Abraham at 2:08:00 PM