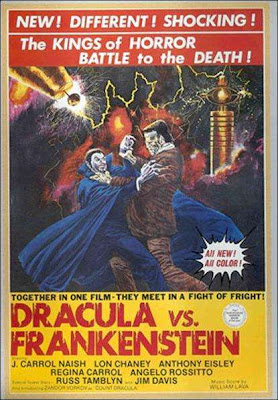 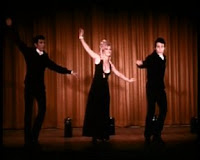 (Trailer.) Not the Spanish Paul Naschy vehicle from 1970 (Los Monsruos del terror (trailer), also a legendary turkey), but the infamous Al Adamson flick of a year later.
Al Adamson is one the unsung heir-apparent of Ed Wood, Jr., but his career differed Wood's in an important way: Adamson actually had a successful career as a surreally incompetent exploitation filmmaker. Seemingly, he even actually eked out a satisfactory living from his regular output of inept but oft-entertaining films, for unlike Ed Wood, who was living in poverty as an unknown and forgotten drunken failure when he died in 1978 of what was most likely heart failure, when Adamson was murdered in 1995 (and hidden under the freshly laid cement and tile of his new bathroom) by a live-contractor named Fred Fulford (currently serving 25 years to life), Adamson was living a relatively comfortable life as a grindhouse filmmaker for Independent-International Pictures, a production firm he co-founded with Sam Sherman in 1969. 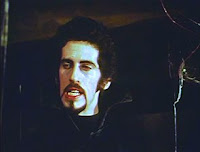 At their worst-best, Adamson’s films are as “entertaining” as Wood's surrealistically inept masterpieces, but Adamson's films often display a sadistic and vicious attitude that Wood's innocent output never came close to. Like Wood, however, Al Adamson had an affinity for washed-up stars from the past. Dracula vs. Frankenstein even features two such saddened shells of Universal's Golden Age of Horror in their last screen appearances: an emphysema-wracked and half-blind J. Carrol Naish as Dr. Duryea, the film’s mad-scientist, and an obviously alcohol-addled Lon Chaney Jr. as Groton, Dr. Duryea’s mentally challenged ax-wielding helping hand (a character Adamson almost mockingly presents as a homicidal version of Lennie from Of Mice and Men (1939), one of Chaney's few truly critically acclaimed film characterizations from his pre-alcoholic days). 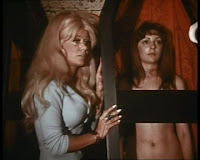 Dracula vs. Frankenstein was supposedly originally started as a sequel to one of his earlier films, the sleazy and nihilistic biker flick Satan's Sadists (1969/trailer), but evolved underway into the nonsensical horror film that now exists. This would explain why the biker Rico (the at the time has-been child star Russ Tamblyn) and his biker cohorts flit in and out of the film before finally being axed by Groton.
The inane and convoluted non-plot of Dracula vs. Frankenstein finds Dr. Duryea, the wheelchair-bound last living descendant of Dr. Frankenstein, working out of the funhouse of a beachside amusement park, busy creating some sort of serum from the blood of women that died under the duress of great fear. 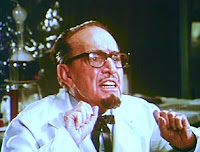 Their fear, it seems, "energizes the molecular structure of their blood," an event essential to his serum that does something. Into the setup pops Count Dracula (Zandor Vorkov, a.k.a. stockbroker Roger Engel, commonly cited as the worst Dracula ever), who has dug up the buried remains of the original Frankenstein monster. Dracula gets Duryea to revive the monster and, in exchange for the serum that does something, Dracula and the monster kill Dr. Beaumont (Forrest J. Ackerman), a hated adversary of Duryea. Somewhere along the way Judith Fontaine, a third-rate Las Vegas entertainer (played by the legendary Regina Carrol, 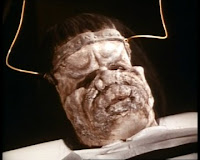 Adamson’s extremely un-photogenic wife and a real-life, former third-rate Las Vegas lounge entertainer) enters the scene, in search of her lost sister Jodie (Maria Leese, whose career had peeked two years earlier when she played a lead in Lee Frost's legendary Love Camp 7). Since Jodie was last seen hanging around with the local hippies close to the amusement park, Judith starts flashing the girls picture around and, as a pay-off, gets slipped some LSD at a local hippie hangout. (Undoubtedly the most laughable freak-out scene ever filmed.) Saved by nice-guy hippies Samantha (Anne Morrell) and Strange (Greydon Clark, the future director of such memorable classics as Black Shampoo (1976/trailer), Satan's Cheerleaders (1977/trailer) and Lambada, the Forbidden Dance (1990/trailer)), Judith wakes up in the pad of Mike Howard (Anthony Eisley), an aging hippie who decides to assist her in her search for Jodie. More girls go missing and more young men show up dead, and the trail of clues Mike and Judith follow all lead back to the Creature Emporium, Duryea's house of illusions. When the two break into the building and discover all the missing and undead (?) girls a fight ensues in which Duryea, Groton and the obnoxious midget barker (Angelo Rossitto, recognizable from Freaks (1932) and an untold number of other films) get killed. Dracula escapes with the monster and Judith in tow, but Mike follows them and frees his new main squeeze, but as they run away Dracula zaps Mike with his magic ring and fries him to crisp. Dragging Judith to an old abandoned church, Dracula is about to make Judith his new vampire bride when Frankenstein gets the hots for her, too. The two monsters battle it out, but after Dracula wins by pulling 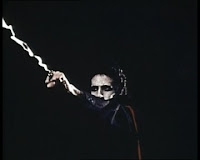 off the monsters arms and head, he fails to make it back to the church before sunrise and burns away on the church steps. Judith then manages to undo her binds and walks away into the new day... 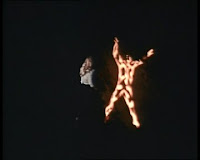 The plot as explained might seem linear enough, but then, numerous non-sequential and unnecessary scenes have been left out of it for sake of brevity. In general, the above description fails to mirror the true ridiculousness of the chain of events and the overall incompetence with which it is presented and played. Dracula vs. Frankenstein never achieves the same sleazy exploitive heights of such Adamson products as Satan’s Sadists or The Female Bunch (1969/trailer), but it still fully lives up to its reputation as a pinnacle of shoddy filmic inanity, a piece of grindhouse filmmaking so schlocky and ridiculous that it defies logic and description. In truth, at around 90 minutes running time, the film is a tad too long; likewise, the released ending as described above is far less entertainingly funny than the alternative (shorter and unused) happy ending also available as an extra on the DVD. Nonetheless, in whatever form viewed, the film is sure to satisfy any true lover of cheap and ludicrous exploitation cinema sludge. Anyone else will probably feel as if they have had their eyes and brains raped.

Watching it now and it's pretty entertaining in that good/bad fashion.

And? Did you find it as enjoyable bad as I did? Gotta give it to Al, he really knew how to make some fine trash – you should check out Satan's Sadists, the film to which this was originally meant as a sequel. Now that is good in a bad fashion...