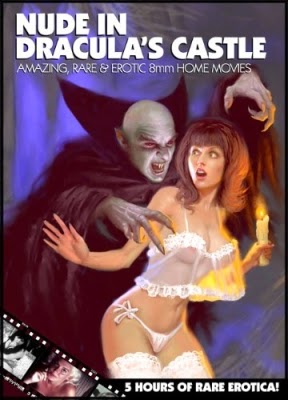 Nothing like a well-made, enjoyable nudie cutie! How we love them! And that is exactly what this extraordinary short film here is: a top notch, quality example of a "horror" nudie-cutie from over 50 years ago! And, yes: there is a lot of naked breastage in this film, so not only is Nightmare at Elm Manor totally NSFW, we also proclaim loudly: "If the sight of beautiful love pillows swinging freely doth offend thee, then away with thou now!" Go here instead and leave this little film to the more sinful-minded…
We stumbled upon this visually entertaining, almost innocent but nevertheless boob-opulent piece of cinematic cheesecake at one of our favorite sites for public domain films, the indispensible Internet Archives, where it bears — bares ? — the title Nightmare at Elm Manor aka Flesh and Fantasy; we have since found it elsewhere as Nude in Dracula's Castle. 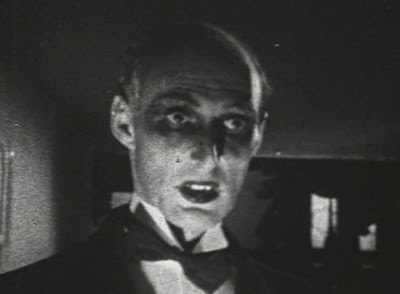 The plot is very simple: A lone, lovely lass (June Palmer) takes a room at the Elm Manor Hotel, a remote and secluded boarding house populated by a sinister-looking butler (Stuart Samuels). That night, as she prepares for bed (for the most part in the nude, of course) by doing such logical things as applying lipstick, she sees something scary — but nothing is there! Later, resplendently nude in bed, she awakens thirsty, so she pulls on an evening gown that she never bothers to tie shut and goes to find some water — only to end up running in terror, her evening gown forever open and her bodacious breasts always in view, from the threatening vampiric butler... Come daylight, however, the world is once again in order. Or is it? 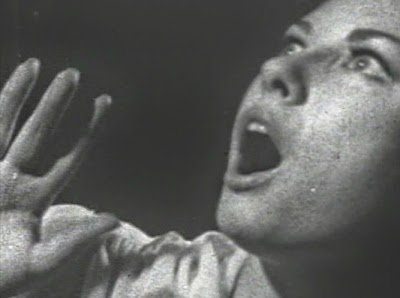 Perhaps the most precise explanation of the events pictured is found at the Ultimate Vampire Movie Guide, which calls Nightmare at Elm Manor "a rather interesting short that is the perfect example of the vampire as a sexual predator". While fully acknowledging the exploitation roots of the film, the website nevertheless also sees a deeper meaning in the events and postulates that "Our vampire is the heroine's fantasy demonization of a man she perceives as a sexual threat." An on-the-mark interpretation, and an oddly Freudian theme for a simple nudie cutie.

Nightmare at Elm Manor:
As a low budget piece of exploitation, Nightmare at Elm Manor is surprisingly entertaining and funny, and offers a certain level of visual intrigue beyond just that of the delightful love pillows of the movie's unnamed lead, the pleasantly curvaceous (38–23–37) and non-anorexic June Palmer (1 August 1940 — 6 January 2004), seen here in this filmlette in her youthful prime of 21 years of age. June, who began her career as a topless dancer at the famous Windmill Theatre in London and "glamour" model, made a number of 8-mm shorts for the great Harrison Marks, who also directed this little film here. June went on to have bit parts in a variety of family favorites — Otto und die nackte Welle (1968),  The Nine Ages of Nakedness (1970 / full movie), Taste the Blood of Dracula (1970 / trailer), Not Tonight, Darling (1971) and Games That Lovers Play (1971) — and an occasional TV show, but undoubtedly she left her most lasting impression in the memories of the heterosexual youth of her day.
Director [George] Harrison Marks (6 August 1926 — 27 June 1997), a familiar name to Brits, "was a British glamour photographer and director of nudist, and later, pornographic films who was active in the fields for several decades." In 1957, Marks and his model wife Pamela Green (28 March 1929 — 7 May 2010, 38-23-37) launched Kamera magazine, a beat sheet like no other at the time and a huge success. (June Palmer premiered in issue #23 [1959], and later went on to become the only model to appear in two different issues of Green and Marks' follow-up publication Solo under the same name.) Green and Marks' "glamour films", of which Nightmare at Elm Manor is one, were a natural follow-up product to their magazines. (Pamela, by the way, as "Milly" meets a grisly end in the disquieting classic Peeping Tom [1960].) The couple split in the mid-sixties, but continued to work together for a long time thereafter.
Trailer to Michael Powell's Career-Killing Peeping Tom (1960):