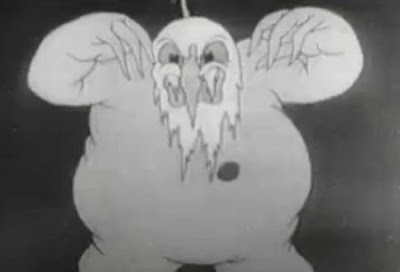 In many places in the world, January is still a snowy winter month. And that is why we're presenting a winter-kind of short film. In theory, this film is set in the summer month of July, but snow is snow is snow, and snow is needed to make a snowman. Even an evil snowman. And before the caps melt and snowmen are but a legend of the past, here is short animated film that shows why kids and cute animals shouldn't play with snow. (Matches are more fun, anyways.)
The Snow Man was written and directed by John Foster (27 Nov 1886 – 16 Feb 1959) and Emanuel "Mannie" Davis (23 Jan 1894 – Oct 1975). In their lifetime, the two worked together on at least 126 cartoon shorts, if not possibly more. The Snow Man and Terrytoons' The Ghost Town (1944 / short film) are the only ones they did together to overtly feature any "horror" elements.
The plot, as given at the Internet Archives facebook page: "An innocent frolic in the snow turns into a horrifyingly homicidal rampage. Nothing a little global warming can't solve, though."

As a followup to your comment on my blog, here’s a link to a YouTube video of THE SNOW MAN: https://www.youtube.com/watch?v=PU_i_dMgnok

Note the title card. THE SNOW MAN is by Ted Eshbaugh and is dated 1933. The Davis SNOW MAN of 1940 is a different film.