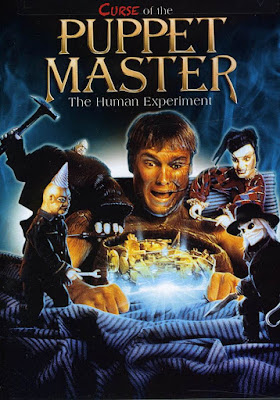 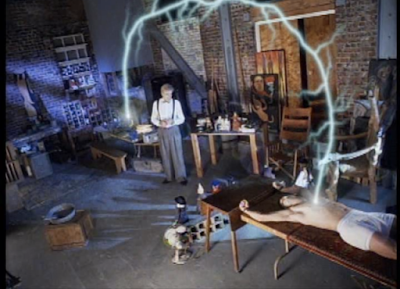 * Guy Rolfe (27 Dec 1911 – 19 Oct 2003), the dollmaker in Dolls, even eventually took over the part of the titular Puppet Master, Andre Toulon, in Part III: Toulon's Revenge (1991 / trailer), Part IV (1993 / trailer), Part V: The Final Chapter (1994 / trailer) and Part VII: Retro Puppet Master (1999), after the actor of parts I & II (1990 / trailer), William Hickey (19 Sept 1927 – 29 June 1997), went to the great toy chest in the sky.
Trailer to
Curse of the Puppet Master:
By the time part VI, Curse of the Puppet Master, rolled around, the franchise had been dormant for four years. Producer Charles Band and his father Albert Band (7 May 1924 – 14 June 2002, director of Zoltan, Hound of Dracula [1977 / trailer] and I Bury the Living [1958]) turned to the productive hackster David DeCoteau, who had previously directed the franchise's first and most popular prequel, Puppet Master III: Toulon's Revenge (1991), to once again point the camera. (As he often does, DeCoteau hid behind a female nom de plume, "Victoria Sloan".) And although the final result proved to be this overtly cheap and uninteresting entry, Curse of the Puppet Master, the "movie" nevertheless proved popular enough for Band & Co to promptly sign DeCoteau up again for the following year's Retro Puppet Master (1999). 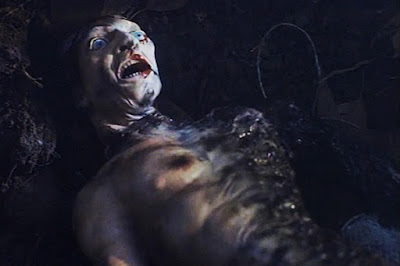 Pretty much a standalone movie with but the thinnest of narrative links to the previous Puppet Master flicks, Curse of the Puppet Master sees the puppets now in the possession of Dr. Magrew (George Peck, of Dawn of the Mummy [1981]), the proprietor of a Californian puppet museum. The very first scene, of Magrew driving out to an isolated rural location where he sets fire to a small crate within which faint screams can be heard, reveals an obscure fact that is visually reiterated numerous times in the movie: it never rains in Southern California, nor does it pour, but girl, don't they warn you, it thunders and lightnings, man, does it thunder and lightning … after sundown.

Albert Hammond's
It Never Rains In Southern California:
Daddy and Son Band also hired "Benjamin Carr" (real name, Neal Marshall Stevens), the scriptwriter of The Brain (1996), to write the screenplay to Curse, but for whatever reason — too low pay, maybe? — Carr/Stevens didn't bother delivering an original script and, instead, more or less totally cribbed the script to Bernard L. Kowalski's* cult "nature's revenge" horror Sssssss (1973 / trailer), replacing that film's mad scientist's goal of creating a race of snake people with Dr. Magrew's desire to create killer puppets from people. But the semi-sexy daughter is still there (Emily Harrison as Jane Magrew), as is her love interest and male object of the Doctor's nefarious machinations — but whereas in Sssssss the male object is a brainy college grad, in Curse of the Puppet Master the male object is a modern Lennie Small (as in: see Steinbeck's Of Mice and Men) named Robert "Tank" Winsley (Josh Green of Spiders [2000 / trailer]). 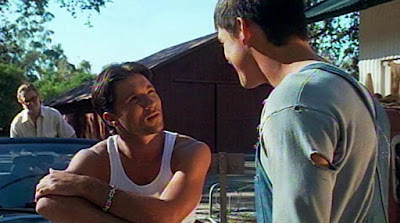 * Admittedly, Sssssss (aka Ssssnake) is probably Kowalski's most enjoyable film, but the director is perhaps best remembered for his early no budget trash classics, Attack of the Giant Leeches (1959) and Night of the Blood Beast (1958 / trailer). Unjustly forgotten within his directorial oeuvre, however, is the idiosyncratic TV western horror, Black Noon (1971 / full film). 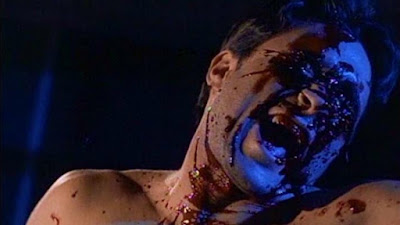 Curse of the Puppet Master is an incredibly slow-moving flick that feels as padded as it does narratively thin. The repeated scenes of Robert diligently and carefully carving away at a new puppet are particularly annoying, as they look to be the same scene simply re-edited for repeated use. They are also made all the more pointless by the fact that although Robert is working on a wooden puppet, the puppet revealed at the film's climax is a metal robot. (One wonders how slipup that obvious makes its way into any film, even one that aims as low as this one.) 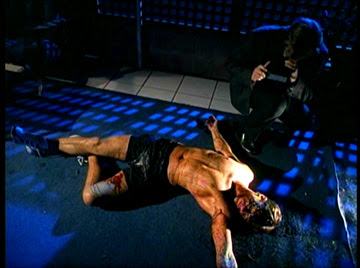 Filmed in a clear and clean video aesthetic, the movie's visuals offer little in way of building suspense or horror, and [intentional] humor is likewise nonexistent. Even the usually fun sight of killer puppets on the move is substantially dulled, as unlike in the other Puppet Master flicks, the full bodies of the puppets here aren't shown when they are supposedly on the move. The result is that they usually look as if someone is holding them off screen and bobbing them forward in some half-assed attempt to emulate a walking movement. The death count is relatively low and most of the killings are similarly uninspired, the highlight being of course the obvious money-shot kill of the über-asshole wannabe rapist Joey Carp (Michael D. Guerin) who, properly enough, has Blade slashing at his face while Tunneler drills away at his crotch. (Being a puppet, Tunneler should perhaps be forgiven for not knowing that pegging is done from the back.) 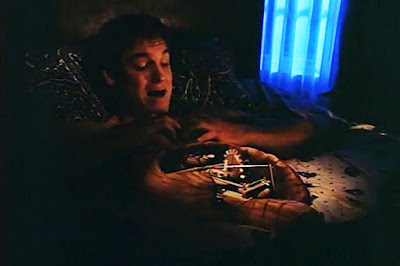 But if Joey is the movie's focal bad guy, he is in fact but one in a small litany of dislikable or morally questionable characters. Both Sheriff Garvey (Robert Donavan of The Hazing [2004] and Corpses [2004]) and Deputy Wayburn (Jason-Shane Scott of Return of the Killer Shrews [2012 / trailer]), for example, though ostensibly simply pursuing first a missing persons report and then a murder case, are less diligent representatives of law and order than position-abusing, violence-prone dickheads. Dr. Magrew, in turn, despite an appearance of benevolent friendliness and paternal attentiveness, is both duplicitous and conniving and utterly heartless, if not mad — but he is also at least a funny sight whenever he puts on his trench coat and hat and slouches off to do something despicable. (Sorely missing from his general appearance is a long moustache, one which he could have twirled whenever he stands around looking foreboding.) 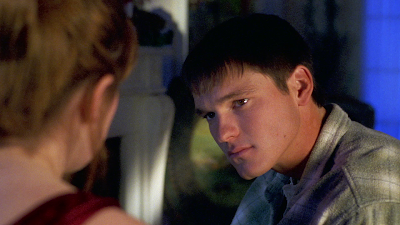 While opposites are said to attract, the "romance" between Jane and Robert rings more of dramatic necessity than believability. Likewise, for a college grad, Jane is amazingly slow at figuring out that her Daddy done lied to her when he, in order to do his planned dirty deed with Robert, sends her away to pick up a non-existent package. The why and timing behind her returning to the forest to look into the burnt box she and Robert found previously is not exactly logical, either, as there is no obvious link between it and her Dad's lie. (Still, it does allow for the appearance of the Matt doll, perhaps the only truly unsettling sight of the movie — far more unsettling, in any event, than Robert's two mildly effective dream sequences.) 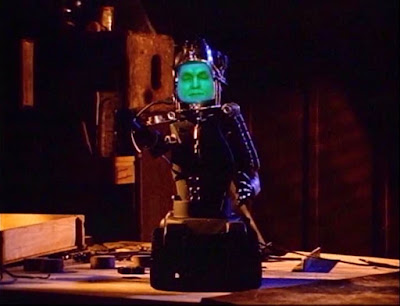 On the whole, despite or maybe because of its limited cast of characters, Curse of the Puppet Master feels both padded and oddly empty: its narrative progresses like spilled chilled molasses, and for all the predictability of the events they don't even manage to lead to an effective resolution, ending instead as if half the film material of the climax somehow got lost. (All tease, and then major PE.) It seems somehow beyond believability that a movie as uninteresting and dissatisfying as this one managed to revive the franchise. 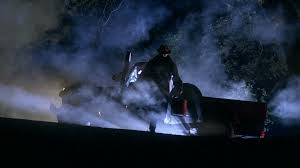