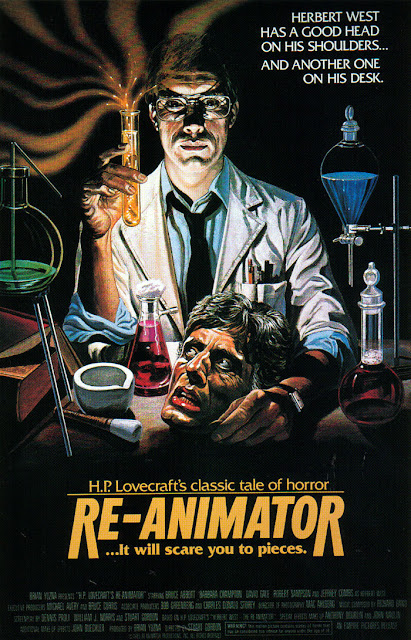 Director Stuart Gordon literally burst onto the scene when he made this campy, gore-drenched modern horror classic, his directorial debut, in 1985. It truly made everyone sit up and take notice, including many who normally wouldn't even sneeze at a low budget slimehouse horror film. For example, although neither Time nor Newsweek reviewed the film, they did notice it, and when Gordon's next splatterpiece, From Beyond (trailer), hit the screen the following year in 1986, both saw fit to review it (and give it praise). At the time, Newsweek praised From Beyond as "a grisly amalgam of sex, shock and satire," while Time saw fit to call it "bloody good entertainment" – descriptions that can just as easily be applied to Re-Animator, a prime piece of sleaziod cinema from the eighties that, now as then, remains essential viewing for anyone that claims to like horror films.


"Who's going to believe a talking head? Get a job in a sideshow."
Herbert West

The full title of the film is, of course, H. P. Lovecraft's Re-Animator, in reference to the tale by the great writer which inspired the movie, "Herbert West – Re-Animator." Lovecraft himself supposedly had no high opinion of the story, which he wrote as a sort of parody of the classic novel Frankenstein, and S. T. Joshi, a leading specialist in fantasy and horror fiction, says that the original tale is even "universally acknowledged as Lovecraft's poorest work." Whatever the tale's rep might be, and whatever deficits it might have, Gordon took its general concept and updated it to the 80s, and – with the able assistance of producer Brian Yuzna and an extremely game cast – ended up making one of the funniest and bloodiest and most original films of its day.


"I must say, Dr. Hill, I'm very disappointed in you. You steal the secret of life and death, and here you are trysting with a bubble-headed co-ed. You're not even a second-rate scientist!"
Herbert West

Of course, for the full viewing pleasure one must make sure to get the unrated version which, although missing the "never-before-seen dream sequence" supposedly found on the LaserDisc version, does offer many a sight missing in the R-rated version (we're talking a difference of 100 minutes to 86 minutes). The missing minutes include everything from eyeballs popping out of a head in the opening scene to a visually pleasant nude scene of one truly hot-bodied Barbara Crampton (as Megan Halsey) getting dressed after an evening roll in the hay with her boyfriend Dan Cain (Bruce Abbott) to extended shots of a fake-looking, revived but vivisected cat hissing and growling to the initial death of Dean Halsey (Robert Sampson) to the infamous cunnilingus scene to the bloody excesses of the big final showdown. Even cut of all this, Re-Animator remains a jaw-dropping experience, but with it, the film achieves a continuity of well-timed outrageous excess that simply leaves the viewer bowled over – and, as the finally scream reverberates over the blackened screen, nevertheless somewhat saddened despite all the adrenaline the movie instigates in its viewers.

As mentioned somewhere above, Re-Animator is a riff on Mary Shelley's famous story of creating life, but this time around it is not electricity the reanimates but a glowing green fluid. Set to a soundtrack the liberally quotes Bernard Herrmann's classic score to Psycho (1960 / trailer), the film starts off with a bang – as in: an exploding head – that results in  Herbert West (Jeffrey Combs of Sharkman [2005 / Spanish trailer]), a decidedly anal and dedicated student mad scientist, transferring  to Miskatonic University in New England. Before long, with the help of fellow med student Dan Cain (Bruce Abbott, ex of Linda Hamilton and current of Kathleen Quinlan, who is also to be found in Bad Dreams [1988 / trailer], Bride of Re-Animator  [1990 / trailer] and The Demolitionist  [1995 / trailer]), he is once again single-mindedly pursuing a way to conquer brain death – and as the title implies, he succeeds. But be it Lady Frankenstein (1970) or Corpses (2004), if there is one lesson that is always conveyed in any and all tale or movie about conquering death, it is that conquering death always has its drawbacks.

Aided by 25 gallons of fake blood and top-notch effects – and, at least when it comes to the dead cat, some hilariously lousy effects – as well as a relatively lean story and witty script that barrels along at good speed without sacrificing characterization of the film's protagonists, Stuart Gordon manages to walk a tight rope between schlock and horror, gore and camp, shock and laughter, often within seconds or at the same time. The able cast does a fine job all around, but special mention must go to both Jeffery Combs (in the role that made every genre fan take notice of him) as well as to the memorable  David Gale  (of Savage Weekend [1979 / trailer / full film], The Brain [1988 / Spanish trailer], The First Power [1990 / trailer] and Syngenor [1990 / German trailer]), who literally drips perversity as the evil and unscrupulous Dr. Carl Hill, a man whose insanely horrible toupee is as obvious as his case of the hots for Dale's gal, Megan, the daughter of the school's Dean Halsey (Robert Sampson of City of the Living Dead [1980] and The Dark Side of the Moon [1990 / trailer]).

Re-Animator stands alongside Hennenlotter's Basket Case (1982) and Rami's The Evil Dead (1981 / trailer) as one of the most unique, over-the-top and truly individual horror films of the 80s. The shared scene of a naked Megan (Crampton) and the undead Dr. Hill (Gale), a perverse and horrific yet hilarious scene that has yet to topped, alone makes this film worth seeing. Luckily, however, there is much more to this film than just that single scene – which is why you should finally go see it if you haven't yet. You won't regret it, and it might well become one of your favourite films.