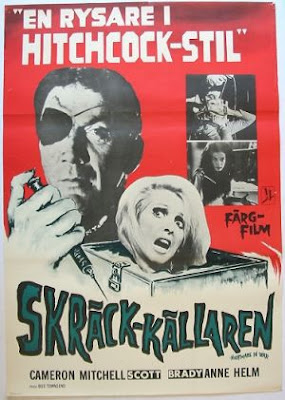 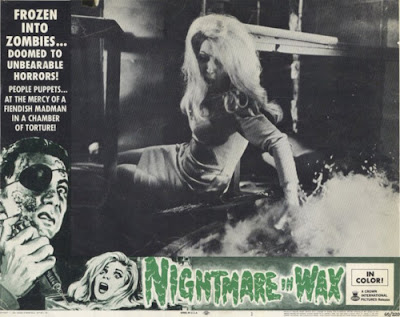 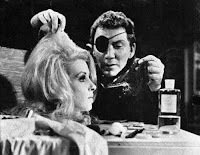 When watching this film, oddly enough our thoughts wandered to the trivia game Six Degrees of Kevin Bacon; for those of you who don't yet know the game, it is built upon the assumption any given working stiff of the Hollywood film industry can be linked to the actor Kevin Bacon within six steps. Six steps are probably too many, actually, for even the name that made me think of the game – Al Adamson – can be linked to Bacon in two. (Al Adamson directed Dracula vs. Frankenstein [1971 / trailer], in which Shelly Weiss played the monster; Shelly Weiss had a part in We Married Margo [2000 / trailer], in which Bacon is seen briefly as himself – thus, Adamson's degree to Bacon is two.)

And what was the thing that caused Adamson – the murdered director of such abysmally entertaining exploitation films as The Female Bunch (1969 / trailer) and Satan's Sadists (1969 / trailer) – to make me think of Six Degrees of Kevin Bacon? Well, something about the production level of Nightmare in Wax made me wonder to what extent any of those involved could be linked to Adamson – and a later five minutes on imdb revealed that due to this film alone, those that don't/didn't have a degree of one have/had at least a degree of two (the same degree most share with Bacon, according to The Oracle of Bacon) two or three times over.

Aside from those actors that had already worked for Adamson, for example, the producer and writer of Nightmare in Wax, Rex Carlton – who supposedly killed himself in 1968 when he was unable to pay the mob back the money he had borrowed to finance a film – was a co-producer of Adamson's biker flick Hell's Bloody Devils (1970 / great opening credits) and wrote and co-produced Adamson's Blood of Dracula's Castle (1969 / full film). Needless to say, the Hollywood exploitation scene at the end of the 60s was obviously an incestuous one.

But let's get to the film at hand: Nightmare in Wax, one of many wax museum affairs inspired by the early classic Mystery of the Wax Museum (1933 / trailer), which was later remade as House of Wax in 1953 (trailer) and, also, is the great granddaddy of the tacky Terror in the Wax Museum (1973 / trailer) and the unjustly maligned dead teenager film House of Wax (2005 / trailer). Of all the films listed and not listed here that the fertile creative sperm of Mystery of the Wax Museum helped sire, Nightmare in Wax is amongst the worst. 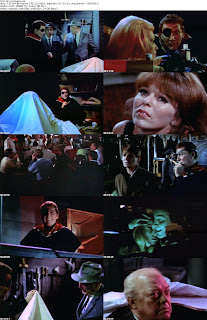 Bud Townsend, the director of Nightmare in Wax, had previously had only done television and, later, went on to do the worthwhile films Terror House (1972 / trailer / full film) and Alice in Wonderland: An X-Rated Musical Fantasy (1976 / trailer). His degree to Adamson is two, for though many of those he worked with worked with Adamson, he himself never did. Nightmare in Wax was even originally released on the lower half of a double bill with Adamson's Blood of Dracula's Castle, and Alice in Wonderland: An X-Rated Musical Fantasy is obviously a direct cousin to Adamson's own sex musical, Cinderella 2000 (1977 / trailer), so one can only assume that they at least knew of each other.
As bad as a director as Adamson famously was, Townsend, who died in 1997, would have done good to get some advice from the more-experienced exploitation filmmaker, for Nightmare in Wax is far worse than anything Adamson ever did: as crappy as Adamson's films are, they are usually also so surreally bad that they become fun, whereas Nightmare in Wax never really transcends its stupidity and ineptitude to become anything more than less-than-mildly entertaining.

Yes, it does offer a few giggles – but simply not enough to make it worth recommending. Likewise, it is never either sleazy or shocking enough to appeal to one's more puerile nature – excepting, perhaps, the rather unappetizing scene of Cameron Mitchell, the nutcase of the film, making out with the corpse of one of his victims as he drives through the LA night. Other than that singular scene, however, Nightmare in Wax is simply bad in a most mundane way – though Anne Helm's bad hair is worth noting, as is the smeared-booger-like "facial scars" sported by the great Cameron Mitchell, a man who famously never said no to a bad script or yes to a good one.

Cameron plays Vince Renard, a chain-smoking former Hollywood makeup artists – the best of his day – who gets disfigured in the face when Hollywood big-shot producer Max Black (Berry Kroeger of Gun Crazy [1950 / fan trailer], The Incredible 2-Headed Transplant [1971 / trailer] and Demon Seed  [1977 / trailer]) accidentally sets his face afire with tossed alcohol in a jealous hissy fit when Renard and top actress Marie Morgan (Anne Helm of Unkissed Bride [1966 / trailer] and the mildly entertaining Elvis flick Follow That Dream [1962 / trailer]) reveal their engagement. Now a broken, scarred and chain-smoking man, Renard drives Marie away – and then proceeds to kidnap and paralyze her subsequent love affairs and coworkers to exhibit them as wax figures in his Hollywood museum. Yes: "paralyze".

You see, Renard has invented some serum that makes people freeze like statues – but if he forgets to administer it regularly, they begin to move again. (Yes, it is as stupid in the film as it sounds here.) Oh, yeah, electricity – even lightening – negates the effects as well. Two incompetent detectives – Haskell (Lawrence Tierney's younger brother Scott Brady) and Carver (the under-appreciated John "Bud" Cardos, who played the highly memorable Mohawk-sporting Native American biker in Satan's Sadists [1969] and went on to direct the fun cheapies Night Shadows [1984 / trailer], The Dark [1979 / trailer] and Kingdom of the Spiders [1977 / trailer]) –

wander ineffectively around in search of Marie's latest missing lover Tony Deen (Phillip Baird) and the chain-smoking Renard kills a likable dim-but-direct go-go dancer named Theresa (Victoria Carroll of The Lucifer Complex [1978 / full film] and Pandemonium [1982 / trailer]) before the scriptwriter (Rex Carlton – remember him?) obviously ran out of ideas and ends the film with a total mindfuck – one that didn't work any better 24 years later in the far more abysmal exploitation "art film" Boxing Helena (1993 / trailer).

Nightmare in Wax is much, much better than Boxing Helena, but in the end it really isn't worth watching; Cameron Mitchell made many a far more entertaining film than Nightmare in Wax – which can also be said of many of the no-names that were involved in this film, too. Still, the flick has the patina that age gives bad films and the locations are often sort of groovy and the dialog, like the whole narrative, is so stupid that it is not completely without plus points – in the right conditions and in the right mood, the film is probably mildly entertaining, it just never reaches the heights of a true Al Adamson piece of flotsam.
Posted by Abraham at 12:16:00 PM