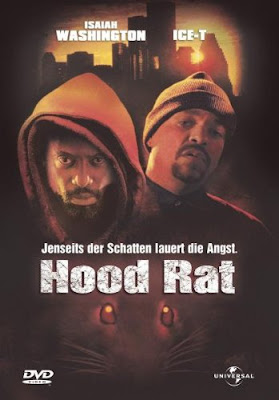 "'No need to panic' and 'I'm going to set the ladder out' don't go in the same sentence, Levi."
Vetta Taylor

Jeez, this fifth-rate, direct-to-video neo-Blaxploitation take on Willard (1971 or 2003 / trailer) or Ben (1972 / trailer) seems like a huge career nosedive even for its second headlining star Ice-T – this flick is even less to write home about than his earlier "star vehicle" Leprechaun in the Hood (2000 / trailer), which at least was so enjoyably stupid that it was funny. Tara (aka Hood Rat) is stupid, but not half as stupid as it is bad, and is neither enjoyable nor funny. It is a total bomb, even if everyone involved seems to have taken it so seriously that the acting ain't half bad – though Isaiah Washington does sort of overdo it on occasion. About the only good thing that can be said about this film is that Tami Roman, who plays Judge Banhead, still looks hot in the film (what dif 9 years can make) and everyone in the film has perfect teeth – the latter is a mean feat, if you consider they all be slum inhabitants. (Hah!)

Per say, one can't really place flaw in the direction, it agitates well within the realm of a contemporary William Beaudine film. Even the questionable use of "rat view" and/or image distortion whenever the going gets tough is clearly understandable as a financial decision in that it negates the need of money for real special effects such as blood or prosthetics or mildly demanding CGI in a film that obviously had no real budget and way too many tertiary characters. (OK, some CGI is used, but really, it in no way looks professional – the attacking CGI rat masses are an embarrassment of inability.) The actors recite their lines with all the conviction of a one-take-per-scene film, though none – with the possible exception of Taurean Blacque (DeepStar Six [1989 / trailer]) as Souilliez, the Hiaten-born slumlord, and a few of the other older characters – were cast with any consideration of whether or not they fit their parts.

Isaiah Washington (Romeo Must Die [2000 / trailer], Ghost Ship [2002 / trailer] and Dead Birds [2004 / trailer]) is Max, a milquetoast homeless dude living with his wheelchair-bound brother Courtney (Guy Torry) in the cellar of an Atlanta slum building populated with good-looking gangbangers, attractive crackheads, an older couple and an odd assortment of other well-groomed people. (Ice-T [Tank Girl (1995 / trailer) and Crime Is King (2001 / trailer)] is the only real slobby-looking person amongst the entire cast). Max gets beaten up a lot and is basically everybody's dog. As punishment for his slumlord violations, the Haitian-American owner of the building gets ordered by the courts to spend 30 days living in his building, and no sooner does he arrive than does the wanna-be Baby Doc start rocking the boat; in a tissy fit, he fences the whole place in without sharing the gate's exit/entry code with anyone. Courtney's death by hypothermia is the end result. But woe to the slum-world: Max has befriended a rat he names Tara – after briefly considering "Ben" for a second or two – and Tara gets her entire extended family to wreak havoc and revenge (as in death and destruction) upon everyone in the locked-down building...

To say the film lacks tension is an understatement. Way too much time is spent leading up to the big showdown, and much of what occurs up till then really comes across as filler. (The entire unbloody and unfunny-but-meant-to-be-funny opening scene with a stoner exterminator that gets totally eaten by rats feels 100% like a tacked-on scene to add to the running time – but then, many a scene seems very tacked on in retrospect.) A couple of nice shocks do flit by briefly at the end of the film – a crackhead on the pot being eaten to death by rats coming up the plumbing, a self-immolation and a rat out the mouth of a dead girl being the highlights – but by the time they happen it is really too little, too late (and since none of the scenes are shown for any length of time, they are really too little).

There are also way too many stupidities in the script – to name but a few: Max can take a bullet and still move like a champ, a gangbanger parks his expensive RV outside the house with the sunroof open but has the door locked, the same dude helps two old folks escape by holding up a fence but never thinks about simply driving it down with his RV, Tara the Rat can obviously understand English and sets her family upon any and all that even just badmouth Max (who obviously understands rat talk), white (clean) crackheads live in a neighborhood that probably means instant death to any whitey who goes out on the street, no one lynches the owner when he shows up and, and, and... Scriptwriter Stan Foster (whose only credit seems to be the screenplay for Hangman's Curse [2003 / trailer]) was not trying very hard when he wrote this one.