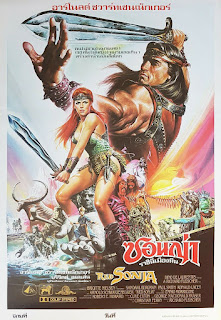 If we are to believe the popular press, when Red Sonja was released, Arnold Schwarzenegger's then wife, Maria Shriver, supposedly told him, "If this doesn't kill your career, nothing will." Well, she was wrong, his career survived and flourished until he went into politics and became California's Governator. Now a retired outsider of the morally corrupt fascist-wannabe party that is the GOP, Arnie still churns out the flicks but most — regardless of how interesting* some are — don't make the waves they used to. Not that Red Sonja made many waves when it came out, either: the movie flopped big time.
* American English interesting, not British English interesting. 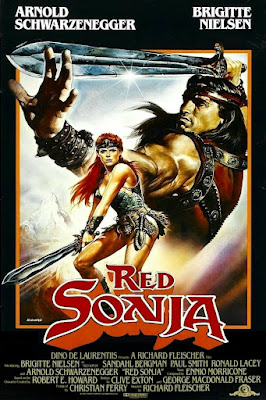 Trailer to
Red Sonja:
In theory, Red Sonja isn't even a full-blown Arnie flick. Back when it was made, he had already done two successful barbarian movies for producer Dino De Laurentiis, Conan the Barbarian (1982 / trailer) and Conan the Destroyer (1984 / trailer). In this movie here, based on a character from the Marvel Comics Conan universe,* he had initially signed on for a lengthy cameo but, by the final cut, the footage he had shot was used in a way that expanded his mini-part into a co-starring role. Copyright reasons dictated that his character not be named Conan, which is why his sports the name Kalidor. Thus, depending on one's own penchant, Red Sonja can be viewed as an independent tale set in the fictional Hyborian Age or as a semi-direct sequel to Arnie's two earlier and better barbarian films.

* Mama's boy and proto-incel Robert E. Howard (22 Jan 1906 – 11 June 1936), world-renown author of the Conan tales, also created a red-headed gunslinger character named Red Sonya, but her few tales were set in the 16th century. The red-heading sword-slinger known as Red Sonja was actually created by writer Roy Thomas and artist Barry Windsor-Smith in 1973 for a two-parter ("The Shadow of the Vulture" and "The Song of Red Sonja") in comic book Conan the Barbarian issues 23 and 24. She eventually was given a series of her own (first issue cover below), where the great Frank Thorne (16 June 1930 – 7 Mar 2021) gave her massive boobs and established her prototypical look, which has pretty much remained unchanged to date but was not reflected in the movie. 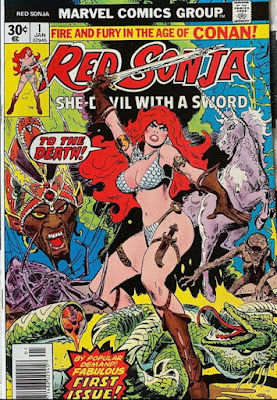 Just over a decade ago, in 2011, the Comics Buyer's Guide ranked Red Sonja first on its list of the "100 Sexiest Women in Comics". How she beat Power Girl [#9], Storm (#30) and Starfire (#20), we know not, but what we do know is that when the popularity of a comic character heavily involves sexiness, it would be advisable, when bringing that character to the big screen, to at least hire an actress that is somewhat sexy — or, should that not be possible, then at least an actress with a limited amount of thespian prowess, if not simple presence. In that sense, Red Sonja starts off on a bad foot by having a relatively unsexy slab of wood in the lead role: pre-boob job Brigitte Nielsen in her feature-film debut. Her lack of presence, physical or screen, is matched only by her lack of basic thespian skills. 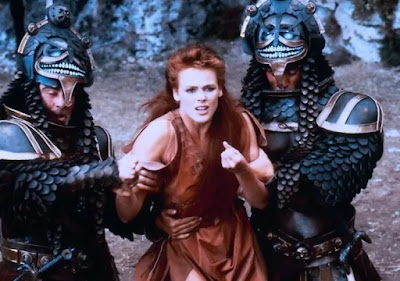 But then, one is hard placed to claim that anyone in this movie does a good acting job, so her total inability to emote any emotion convincingly should not be held against her. If anything, it blends in well with the general incapability found throughout the film, and is actually somewhat outshone by the even more wooden turn of Sandahl Bergman (of Ice Cream Man [1995 / trailer], Fred Olen Ray's Inner Sanctum II [1994 / trailer], and Hell Comes to Frogtown [1988 / trailer]) as the movie's main villain, the insanely power-hungry Queen Gedren. 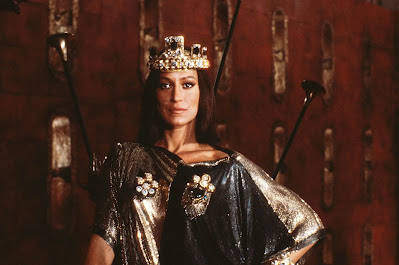 The plot is pretty much rote, but at least the opening scenes more or less follow (if laughably unconvincingly) Red Sonja's original tale of origin: her family slaughtered and she herself raped and left for dead, a magical goddess appears and gives her warrior strength and fighting skills. In the movie, however, and unlike in the literature, it is not a group of mercenaries that does the nasty to her, but the soldiers of the spurned lesbian Queen Gedren. (Yep, this movie uses the ol' evil lesbian stereotype.) 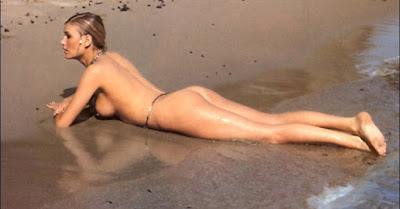 As chance would have it, Sonja's sister Varna (Janet Agren, above & not from the film, of Eaten Alive! [1980 / trailer], City of the Living Dead [1980 / trailer], Rat Man [1988 / trailer], The Killer Reserved Nine Seats [1974 / trailer] and Panic [1982 / full film]) belongs to a religious order possessing a mighty artifact of untold power. When Gedron decimates the order and gains the talisman, the dying Varna, thanks to the timely intervention of the muscular Kalidor (Schwarzenegger, below, not from the film), manages to survive long enough to tell Sonja that if the talisman is not destroyed, it will destroy the world. And thus Sonja sets out for Gedren's kingdom, slowly and unwillingly collecting a motley crew of allies: the hunkadelic Kalidor, the annoying young Prince Tarn (Eddie Reyes Jr.), and his bodyguard, the portly Falkon (Paul L. Smith [24 Jun 1936 – 25 Apr 2012] of Haunted Honeymoon [1986 / trailer], Gor [1987 / German trailer], Crimewave [1985 / trailer] and Caged Fury [1990 / trailer]). Director Richard Fleischer (8 Dec 1916 – 25 Mar 2006), son of the great master animator Max Fleischer,* was in his day a tried and true professional and handicraftsman of all genres with many a good to great to terrible films to his name, among others: the big budget craptastic exploiter that is Mandingo (1975 / trailer) and could never be made today, Soylent Green (1973 / trailer), See No Evil (1971 / trailer), 10 Rillington Place (1971 / trailer) and Compulsion (1959 / trailer). But in the case of Red Sonja, as in the case of his Amityville 3D (1983 / trailer), he seems to have been only half there. The film itself may actually look beautiful, and it is paced well enough, but aside from his failure in gaining a good performance from any of his cast, he never gets a solid grasp of the material: suspense is non-existent, the narrative never truly jells and seems more like a string of separate scenes in search of a logical progression, and one almost never feels that any of the humor is intentional. 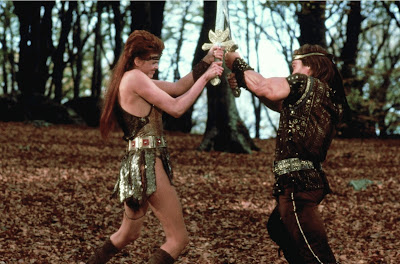 That said, the visuals look good enough that one might prefer to lay the blame of the movie's failures on the "script" supplied by George MacDonald Fraser (2 Apr 1925 – 2 Jan 2008), which, as previously inferred, even has the even-outdated-in-1985 audacity to present Gedren's lesbianism as yet another aspect of her evilness. (If a woman don't like dick, she gotta be bad.) 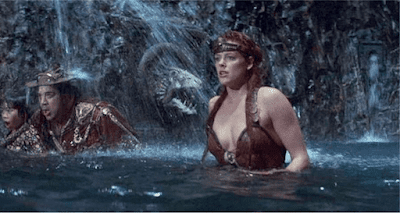 Red Sonja had a budget of almost 18 million dollars, and as cheesy and silly as the movie is, it does at least look as if the money was actually spent on the film. The costumes and sets and special effects range from laughable to great, but across the board they are also eye-catching. But the movie is never truly involving, and is always anything but thrilling. It is easy to see why the movie was such a flop and why, even today, almost 40 years after its initial release, it has yet to gain any cult respect: it is a truly "bad" movie. 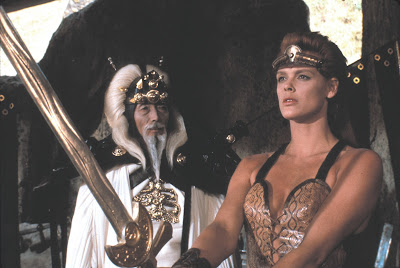 Age may have bestowed Red Sonja with a limited patina, but that patina does not shine enough to make the movie anything more than a minor guilty pleasure.